Bigg Boss Tamil has returned for a third season and week 1 of the controversial show was filled with a lot of tears. Here we take a look at the 10 best moments of the week gone by: 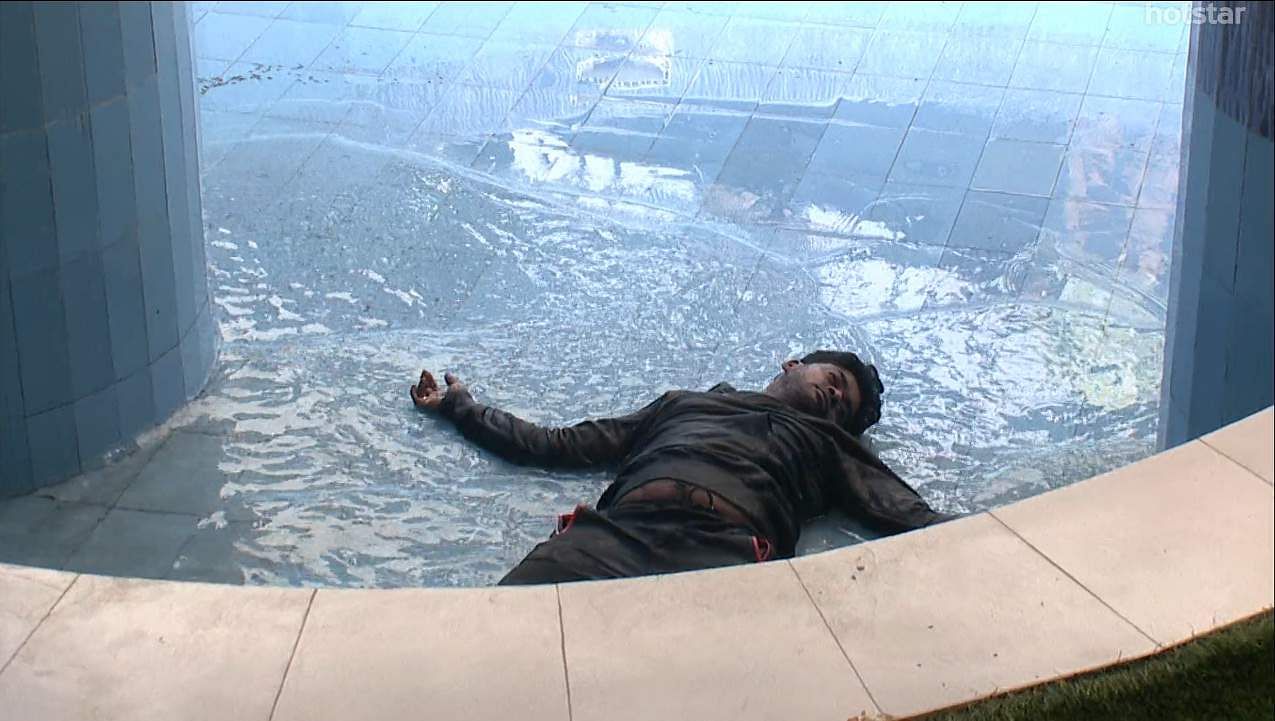 Bigg Boss doesn't have traditional morning alarms. Instead what we get is songs that wake up the members, who dance their way to a wakened state. Sandy, the dance master, starts dancing in the empty swimming pool but falls down and gets hurt needing as many as four stitches.

With Chennai facing severe drought conditions, Bigg Boss first up said that swimming pool won't be filled at all. Then it was followed by the announcement that there will be 1000 litres of water for drinking and kitchen purposes and it will be metered. There will also be 100 litres per person per day for washroom purposes. However, water was not the only metered resource as fuel was also limited to 5kg per week. This is the first time ever in a Bigg Boss House across the country that such measures have been implemented. Abirami reveals to Sherin that she has had a crush on Kavin ever since his serial days when he used to play Tamizh on Saravanan Meenatchi. Sakshi who happens to be a part of the conversation later on mock swoons on listening to it. When she does reveal it to Kavin, he wonders if it is a prank but once he realises that it isn't, he says that he likes as many as five girls in the house. The week ended with Abhirami revealing that her opinion on Kavin has changed but we do not yet know what that is. 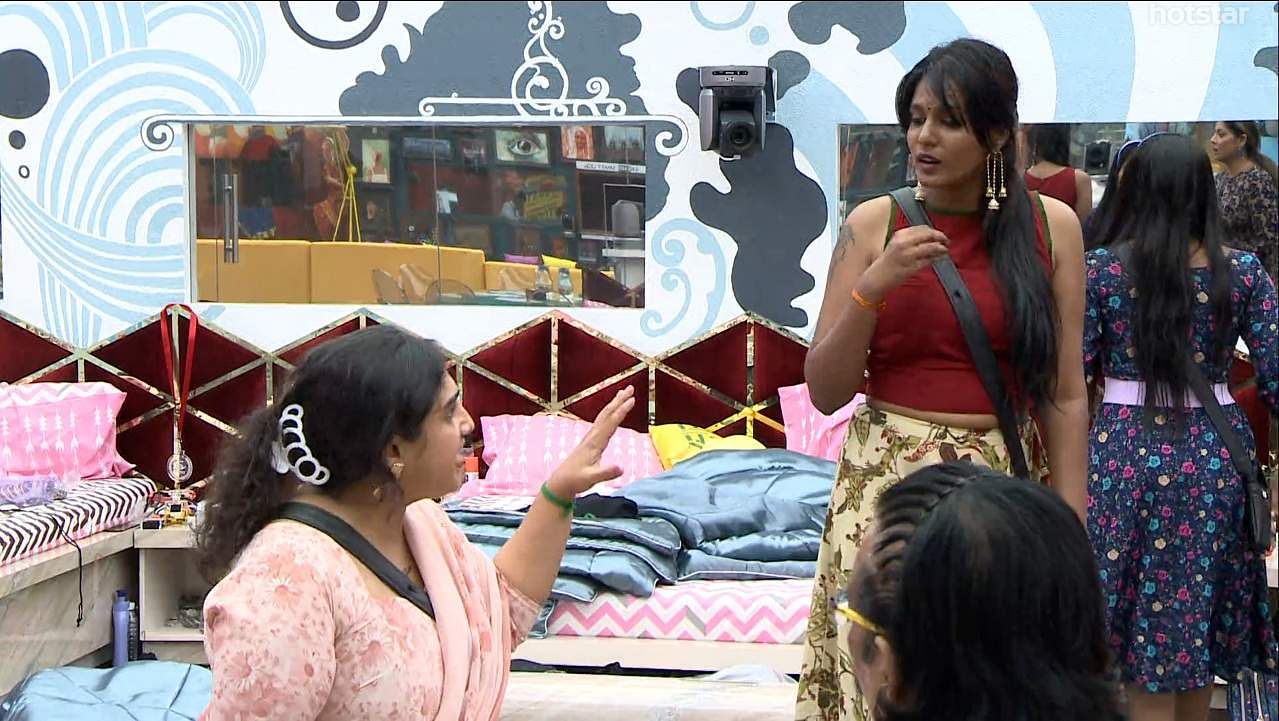 Right from her entry as a wildcard, Meera Mithun's stay in the first week of Bigg Boss hasn't been pleasant. Welcomed coldly (or should I say not welcomed at all) by Sakshi, she then picked a fight with Abhirami. Fathima Babu, who came to intervene, was also mocked by Meera's 'calm down' approach. This went into overdrive when she refused to listen to Vanitha's advice on changing teams and it broke into the biggest fight on Bigg Boss house this week. Post Meera sharing her story, Vanitha apologised to her. Will the wound still fester next week?

5. The start of the tear-filled stories 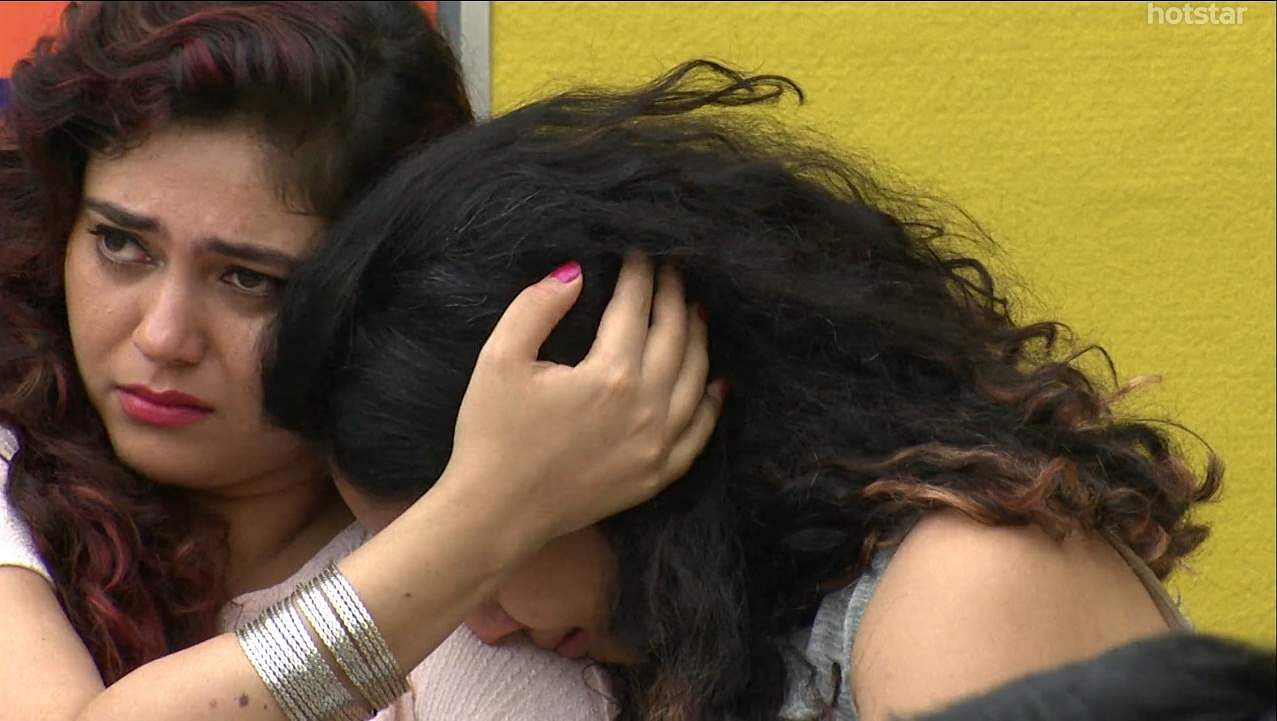 The first big luxury task of this week came with four people sharing their individual stories. Mohan Vaidhya, who had been regaling everyone with his lovely songs and his general goofy behaviour, broke down when he talked about his past. His tragic life story was the first of many to mark a week when participants would get to know everyone that little bit better amidst tears. Vaidhya's only goal for this season, he said, is to not feel lonely and to make more friends through this show, and it was quite the melancholic share. 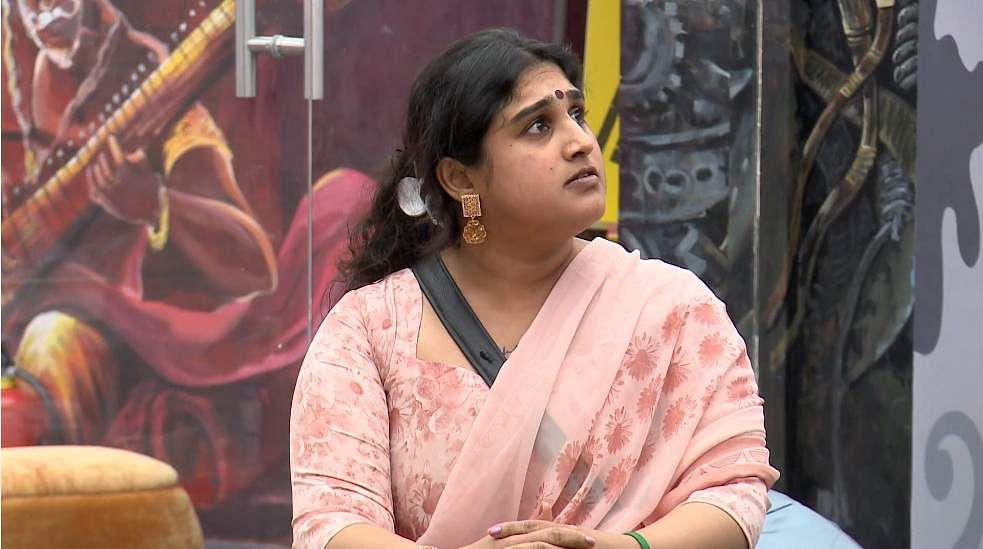 When Vanitha Vijayakumar was selected as captain, social media was predicting fights galore. While it didn't start off that way immediately, on the second day Sakshi got intimidated by her over food issues. And her scuffles with the aforementioned Meera aside, people felt she was too bossy, leading to her not getting any hearts from her co-contestants over the week. How she reacts to her fellow housemates next week will be something to look out for. 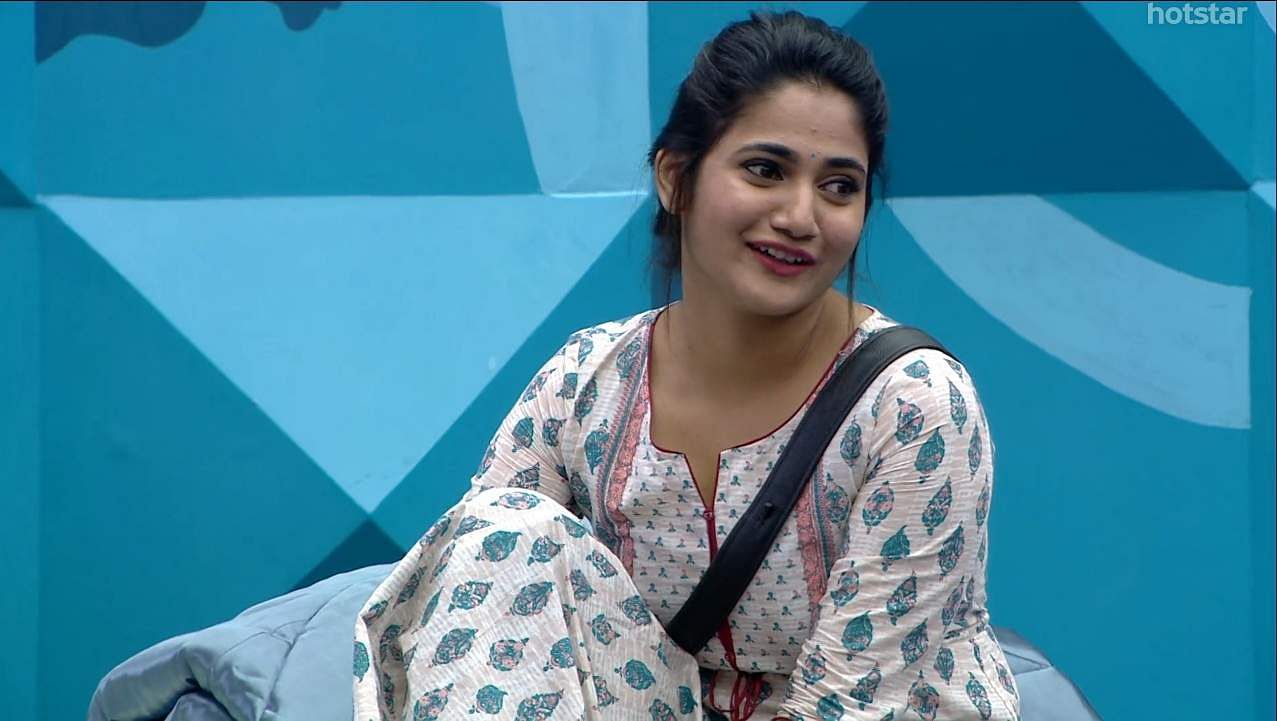 If there is one person who has garnered the hearts of all watchers over the week it has been the Sri Lankan news anchor, Losliya. The way she has ingratiated herself with fellow contestants, be it her dance or her song sessions, has been quite refreshing. Also, to say her Tamil has a separate fan base is an understatement and that has now manifested itself into a Losliya Army a la Oviya Army in the first season. Her personal story told with a message, only added to her appeal.

What is a Bigg Boss week without Kamal Haasan's monologues? He takes two spots in this week's list. The first goes to his amazing story about a potential starring opportunity with the late actor-turned-politician MGR. We all know how much Kamal adores MGR to the point that many of the latter's film names being either a part of Kamal's filmography or his dialogues. Given that Kamal and Sivaji gave us the terrific Devar Magan, I wonder what an MGR-Kamal collaboration could have given us? Iruvar reimagined?

9. Who will Kamal bring back? When Kamal talked about wanting to bring his brother Chandrahaasan, I have to admit I shed a tear. Whenever Kamal launches into his stories, and how he would like to bring not just his brother but also his parents back, there is a charm in his storytelling capabilities that just cannot be overstated or undersold. 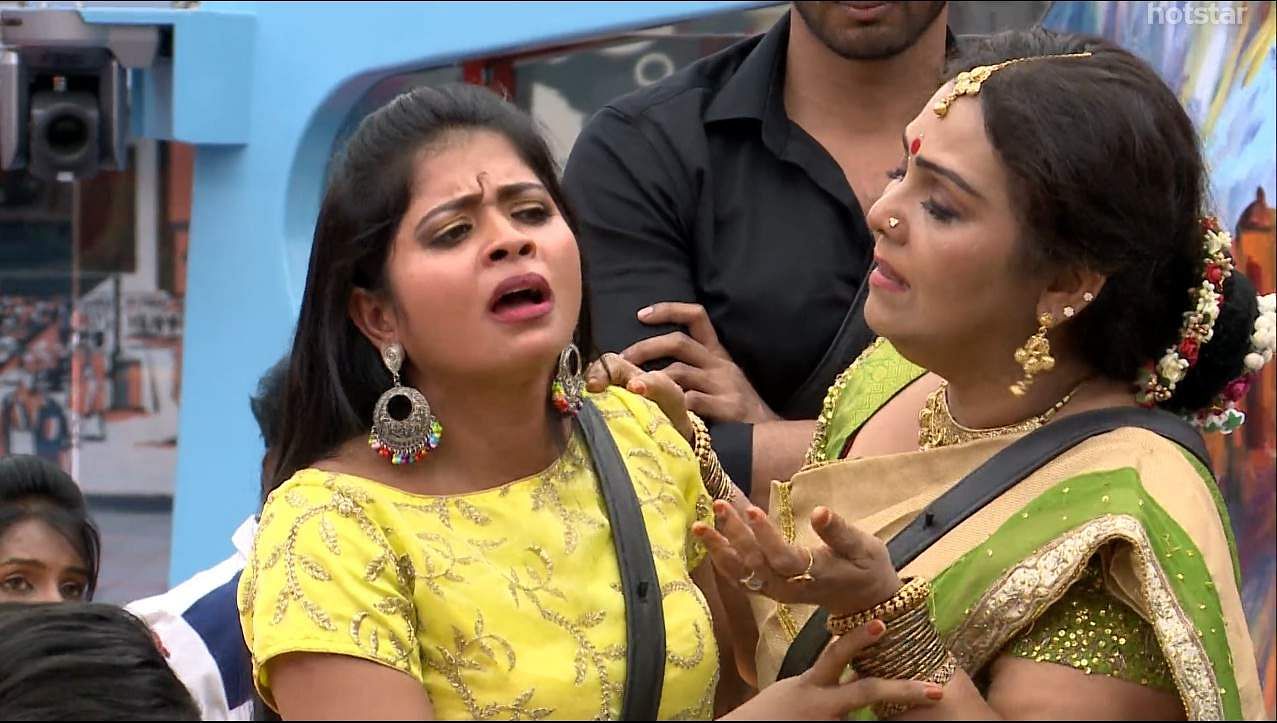 Jangiri Madhumita became a point of great contention when she launched into a tirade about Abhirami's behaviour not being fit for a Tamil ponnu. A huge fight broke out when Abhirami, Sherin and Sakshi took offense to Madhumita's usage of the word and asked how it is a cultural denigration. After those three stormed off the house, Kavin came to Abhirami's side and soon after, the entire house ganged up on Madhumita leading to her breaking down. The week ends with Abhirami swapping the beds with Losliya.