When you are, for long, in the business of interviewing those in cinema, you make your peace at some point with all the diplomacy, and sometimes, insincere humility of responses. It’s par for the course, with cinema personalities often — almost to the point of boredom — wording their responses to ensure nobody, living or imaginary, gets offended. In such context, actor Vinodhini Vaidyanathan’s almost reflexive responses come as a relief. I start off by indicating admiration for her distinct manner of dialogue delivery. “Don’t you think it’s a bit repetitive though? Sometimes I have felt I am,” she says, and proceeds to explain that she doesn’t think her acting is instinctive. She’s trained in theatre and approaches her characters with almost methodical preparation. “You learn the lines the previous day and yet, try to deliver them like they are your own. You also have to make it seem like it’s the first time they are being said.”

Her most recent character, Kalamma in Ashwin Saravanan’s Game Over, has brought her widespread appreciation across the country. Another actor would stop with expressing gratitude, but she explains that it’s among the rare times when she has been approached for an urban role. “If not a village character, I get asked to play teacher, or a principal. In fact, even Ashwin wasn’t sure I would fit the role till we did a few screen tests.” I note that she applied dark make-up to play Kalamma. She catches on immediately. “I followed the director’s vision. He did that more to bring out the inherent sweaty, oily texture of a person who toils through the day. This was more about that than about the colour of her skin, or fuelling a stereotype.” She goes on to talk about how, in many films, character artistes are asked not to wear makeup, so the lead actors can look particularly special. “This wasn’t the case in Game Over.”

Films like Game Over, which show women having agency, are important, I offer, and note that such films seem on the rise. She agrees and remembers films like Maya by Ashwin himself, and Taramani by Ram, as examples of films featuring strong women. Typically, your average interviewee would conclude by painting an exaggerated picture of optimism and note, with satisfaction, that the industry has indeed come a long way. Vinodhini, instead, notes that there is quite some way to go. “Most films on women are centred on sexual abuse. It’s an important angle, but not the only one. We have to talk about other issues too: How they are at the receiving end of constant judgement, how they are devalued by salary disparity, how they face bias at work…” She remembers the recent film, To Let, as being a poignant film about the difficulties faced by a man from the film industry. “I wish it had been a woman though. Being a single woman myself and working in the film industry, these are problems I can relate to.” She attributes this single-minded focus on problems concerning sexual abuse to the vast majority of our filmmakers being male. “You have to wonder how much knowledge they have about gender issues, how much insight women have passed on to them. Are they aware that even when we perform a simple task like parking a car, we get more instructions than men do? Storytellers must observe all these problems; a story could come from any of them.” 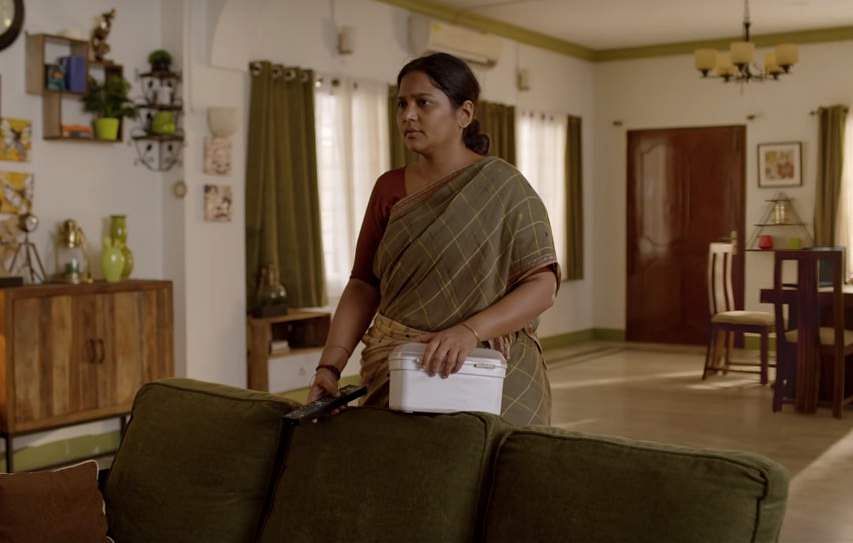 Vinodhini has mentioned in another interview that she is a big admirer of how Taapsee gained insight into her character by asking Ashwin a lot of questions. I ask if character artistes are accorded similar freedom. “Some directors do, yes,” she says, and notes that this goes a long way in shaping fascinating characters, like the lawyer she played in Aandavan Kattalai. “Director Manikandan sir allowed me that space.” This isn’t just about women. “It’s about all supporting artistes. On many sets, we are not allowed to ask too many questions, say, about the arc of our characters. We still keep trying.” And in any case, how much could you ask when you are approached not with character descriptions and motivations but with information on shooting schedule? “Are you free for five days of shoot?” some production houses apparently ask, without really telling her about the character she would be playing. “It’s not easy ground for character artistes. You have to make sure you are constantly visible, and yet, do only meaningful work.”

The recent roles she has done includes the sister character in the deeply problematic Devarattam. Her performance still shines, especially in the scene in which she communicates mortal fear when chased by a goon with a sickle. She attributes this excellence to a combination of factors. “You are reacting in the moment, and yet, it’s not just instinct.” It helps that she’s constantly honing her craft with her writing, directorial, and acting work in Tamil theatre. Her work in cinema funds her theatre forays. “Money,” she responds in a single word, when asked what she gets out of cinema that she doesn’t in theatre. The fame helps too, naturally. “It has opened a lot of doors.” Unlike many other theatre personalities who haven’t felt too welcome by the film industry, she has never had any issues. “I really like the vibe on film sets.” Ultimately though, it’s all to fund her passion for theatre. “Tamil theatre is not financially viable at the moment. I lost about 60,000 rupees recently putting up a play. I am just waiting to save more money to go at it again. Hopefully, we will make lesser loss next time.” The creator in her is beginning to participate in cinema too, as script discussions and writing opportunities are coming her way.  “I will be credited as a co-writer of story and screenplay for an upcoming film,” she reveals.

For the moment though, she’s rising with each role like Kalamma, as a dependable performer in our cinema. Unlike with male character artistes where options are aplenty, the space for female artistes is still relatively free of notable contributors. Following the passing away of Manorama a few years back, I had written a piece wondering who the next Manorama would be, and lamenting the absence of competent candidates. The men have MS Bhaskar, Prakash Raj, Delhi Ganesh, Aadukalam Naren… What about the women? “Vinodhini,” she says, with assurance. After spending years interviewing those in cinema, it’s the sort of answer you don’t expect.