Tenet Movie Review: Many heady pleasures in a film that doesn’t exactly take your breath away

Let there be no doubt that Christopher Nolan enjoys his physics. Well, before an actual science expert takes offence, let me clarify that he seems to enjoy it to the extent that it can result in dramatic and visual possibilities. I can picture him poring over the fundamentals of quantum physics, of concepts like time, space and gravity, engaging science experts in conversation, whilst potentially gathering material with which he can go to play as a filmmaker. This would explain why we see him toy repeatedly with the idea of time being able to expand and contract, with the existence of dimensions beyond our understanding, with wormholes and blackholes, with the nuances of how a dream plays out in our subconscious… and more importantly, with the almost preposterous worlds these ideas can potentially conjure up on the biggest of theatre screens. You can picture him considering questions like: What if two men had a fist fight in zero gravity? What if an astronaut were able to fly in and out of a blackhole? At the beginning of this review of the latest Nolan film, I delve as much into this tendency of his to bend and twist science to conjure up arresting visuals because while Tenet is not nearly as effective as some of his previous films, it’s important to note that there are portions in this film, specifically of the action variety, that are bewitching to behold. What if we shot a fight sequence with half the characters operating chronologically and the other half operating in reverse? In fantasising over the possibilities of science, it must be noted that he is stretching the possibilities of cinema too.

The problem with cramming in such dense material and looking to interpret it all under the restrictive boundaries of a tentpole film, is the limited leeway allotted to matters like nuance and subtlety. It’s almost a direct consequence of this that results in his films often getting criticised—and rightly so—for all the exposition that happens through synthetic conversations. Tenet too suffers from much of the same problem. Many conversations in this film are designed with the singular objective of helping you get clued into what the hell is going on. It’s almost the equivalent of the filmmaker directly narrating ideas and events to you. Take, for instance, the early conversation The Protagonist (John David Washington) has with a man, who’s debriefing him.

Recruiter: It’s a fight for survival.

Tenet is punctuated with many such laboured conversations featuring characters across the board, including Barbara (Clemence Poesy), Michael Caine (Sir Michael Crosby) and Priya (Dimple Kapadia). There may not be much joy to be had in the form of dialogues (save for the rare burst of wit), but there is plenty to be mined in the other departments.

Before I move on to larger pleasures, let me begin with Nolan’s penchant for cheeky wordplay and hat tips to inspirations. Remember when you learned that the initials of the leading characters in Inception formed the word, DREAMS? Well, there’s something like that going on in Tenet as well. The antagonist is named Andrei Sator, his last name drawn from Sator Square, a word square containing a five-word Latin palindrome, the five words being Sator, Arepo, Tenet, Opera and Rotas. Arepo’s a forger in this film, Tenet’s the title, Opera’s where the opening sequence takes place, and Rotas is the name of a security organisation in this film. Though I could have, I did not process this naming, this obsession with a palindrome, as just a gimmick. The film itself is one half of a palindrome, or as it is dubbed in the film, one-half of a ‘temporal pincer movement’. The central idea is time inversion, with many portions of the film possessing a poetic sense of symmetry. You can spot this in the number of events that eventually complete themselves, in how the other halves of these events slide into the original event, like missing jigsaw pieces.

I spotted symmetry even in something as unimportant as the running motion of three policemen (one of which is The Protagonist) at the beginning of that opera house scene. The running is almost a dance, to entrancing beats from the track called Rainy Night in Tallinn. Like in many other Nolan films, the music is unafraid to be loud and constant, and is the heartbeat of this film. Almost literally a heartbeat, it’s pounding along quietly in the background. In other places, it communicates the urgency of The Protagonist’s mission. I found Ludwig Göransson’s music to be among Tenet’s chief pleasures—its perpetuity and its unabashed use by a filmmaker who thrives in it. In fact, there were fleeting moments where I almost lost myself in it, at the expense of the visuals. 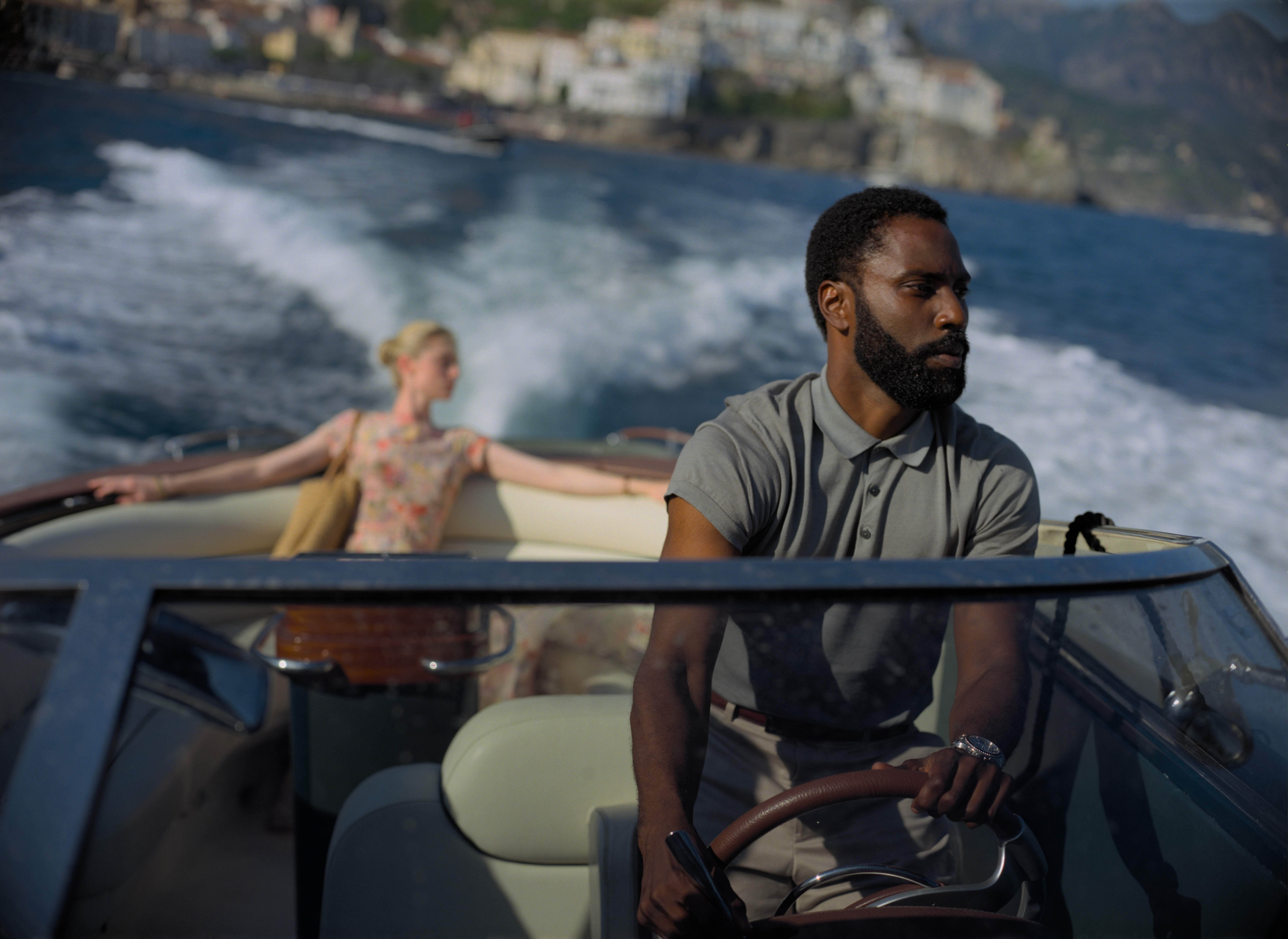 Perhaps the reason Tenet did not feel as rousing to me as, say, an Interstellar or an Inception, is the absence of a robust emotional core. For lack of it, you are left with scientific mumbo-jumbo being bandied about, and characters fretting over the potential end of a world. If the material weren’t as dense and as hard to comprehend, it might have been easier to process it as the WYSIWYG entertainment of a typical Bond film—and perhaps that’s why Nolan thought he could get away with the fairly fringe emotional angle of Katherine Barton (Elizabeth Debicki), who’s abused by her husband, Sator (Kenneth Branagh, who felt rather unidimensional as the stereotypical Russian villain)… but given everything that’s going on, this feels rather cursory. The other ideas—The Protagonist-Neil (Robert Pattinson) friendship or The Protagonist-Katherine relationship—barely take off, emotionally speaking. This isn’t to take away from the powerful performance of Debicki whose eyes, throughout the film, burst with much pain and as Sator points out in a scene, despair. It’s also a relief that she isn’t cowering and waiting to be rescued in this film. She is a bit of a badass herself.

This is a description we could borrow for the action choreography in this film as well, which, along with Ludwig’s music, offers almost visceral joy—which is an unusually deep response to stunt sequences. Be it the chase sequence in which a wrecked car mesmerisingly reverses itself out of damage or that final glorious stretch in which two different teams of fighters work towards a common goal but from opposite ends of the timeline, it is beautiful to behold how an idea as convoluted as time inversion can result in original, memorable visual imagery. It’s in such stretches that you are truly able to do what a character advises The Protagonist in the beginning: “Don’t try to understand it; feel it.”

Tenet is guaranteed to create polarising opinions because it contains both the good and the bad of this filmmaker. For me, the film lies somewhere in between. While criticising this filmmaker for the expository dialogue, the tentpole-film take on intricate scientific theories, and the deliberate convolutions of the narrative that comes almost at the expense of clarity, it’s important to also note how wonderful it is that we have a ‘blockbuster auteur’ who’s constantly trying to blow your mind with new ideas not just in terms of plot and structure, but also with visual possibilities. At one point in the film, a character asks The Protagonist, “Does your head hurt yet?” Well, watching Tenet, it’s bound to, because you’re trying to make sense of reverse chronology, inversion of objects’ entropy, and temporal pincer movements, all the while processing the many knots of the screenplay as well. But when the byproduct of all this is IMAX visual gratification—like getting to see the top of a building explode in slow-motion before coming together, only for the bottom of the structure to explode this time—a bit of headache seems well worth the rewards. Yes, even though this is a film that isn’t exactly gratifying in its totality.