Enable Javscript for better performance
Shankar: No warrant has been issued against me- Cinema express
ADVERTISEMENT

Shankar: No warrant has been issued against me

In an official statement, director Shankar has quashed rumours of a non-bailable warrant issued against him

It was earlier reported that a metropolitan magistrate court in Chennai had issued a non-bailable warrant against director Shankar in regards to a plagiarism case. Now, the director has dismissed such reports calling them 'false news'.

In the statement, he also added that the reports were the result of a 'glitch in the online court reporting'. 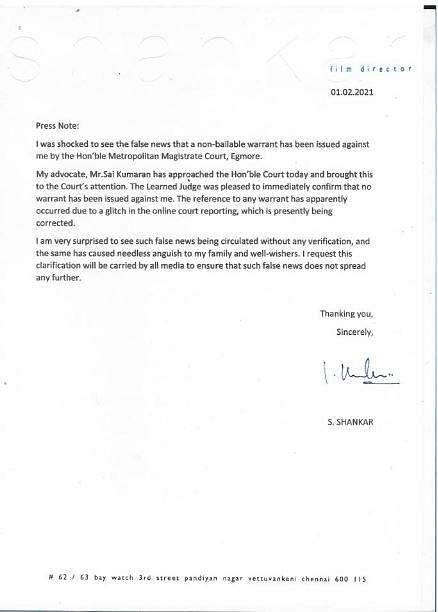 In 2010, a writer named Aarur Tamilnandan filed a case against Shankar in Madras High Court claiming that the director had plagiarised his short story Jugiba (1996) for Enthiran (2010). While Shankar's counsel requested a dismissal of the case, the court ruled against the director and continued the proceedings.

Later, Shankar moved the Supreme Court in 2020 and claimed that his film was not based on Aarur's short story, but the proceedings once again went against the director in October 2020.

The writer has asked for Rs 1 crore as compensation.