Oththa Seruppu and House Owner to be honoured by central government

According to an official notification from the Ministry of Information and Broadcasting about 15 films are set to be honoured with the tag of 'Extraordinary'. Two Tamil films — Lakshmy Ramakrishnan's House Owner and Parthiban's Oththa Seruppu Size 7 — are also part of this list.

While details about this honour are still unclear, both filmmakers are already flooded with wishes.

My sincere gratitude to our
Hon #PMOIndia and the jury members, everyone behind this initiative , it is a great day and I am humbled it is great encouragement for filmmakers like me

Oththa Seruppu Size 7, an experimental film featuring just Parthiban, met with good reviews from critics for the innovation and also entered the Asia Book of Records for having just one cast member in it.

Lakshmy's House Owner, a moving tale about an elderly couple and their struggle during the Chennai floods, was received warmly by critics and audiences alike.

Incidentally, both House Owner and Oththa Seruppu Size 7 are also officially selected for the International Film Festival, Goa 2020 under the Indian Panorama category. 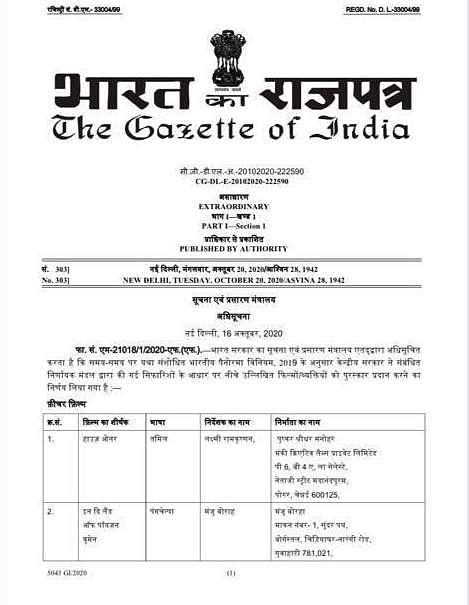