Kamal Haasan and AR Rahman came together for an Instagram live chat session to converse on topics like music, cinema, and much more

It was chaotic and that was the beauty of the live online interaction between Kamal Haasan and AR Rahman. The two Tamil icons spoke about various topics like music, art, cinema, failures, and more. Kamal Haasan was pretty forthcoming throughout the conversation, even at the cost of interrupting Rahman  more than once. On the other hand, the Academy Award winner was in his usual 'zen mode'. Kamal even pointed out that collected composure was something he admired about the musician.

More than once the conversation, facilitated by the YouTube channel Open Pannaa in association with Raaj Kamal Films and Turmeric Media, circled back to their mutual friend: musician Soori. While Rahman was a neighbour of Soori, Kamal was a student of his dad, Thangappan master. From the way, the duo spoke about Soori, he comes across as one of those unfound talents.

Rahman said, "Soori was not let out. He had very protective parents. He had a room and was given everything he needed. There used to be a lot of western music collection in his room like Led Zeppelin even back then. He almost had a childlike enthusiasm."

The discussion then turned to what it means to be a Tamizhan. When asked this, Kamal said, "You should know the language. When one listens to a good poem, his eyes should tear up. A Tamizhan should feel happy when hearing the language. But the love for it should not antagonise others. I here would want to quote what my friend Gnanakoothan used to say: 'Tamil thaan enathu moochu adhai pirar mel vida maataen'."

On the other hand, Rahman said his tryst with the language happened a bit late as he used to be around people of many tongues at AVM Studios, where his father used to work. "I used to fail in Tamil at school. It used to be very very tough for me. Only now am I getting the pronunciations right. Language slows down the artists... especially musicians," he said.

Kamal agreed to this and reminisced how Kannadasan never wrote much. He recalled how the prolific lyricist used to predominantly recite his lines. "If I say all this now, no one would believe me. People would say I am exaggerating just to praise him," he said.

Kamal and Rahman also lauded each other. Kamal admitted that he recognised AR Rahman and his work pretty late. He said, "I was completely blanketed from his (Rahman's) work mainly due to the way I was engrossed in Ilaiayaraaja's work. I found you only after people recognised you. Working with you was a happy experience. I'm not saying this for the sake of it. The atmosphere you create during the whole process is great."

Recalling working with Rahman in Indian, Kamal revealed that he didn't like Kappal Eri Poyachu immediately. "But when I was shooting for the song, it was a totally different experience," he said.

However, of all the songs of AR Rahman, Kamal is apparently fond of one particular unreleased number. "I have never heard anything like that. I have even asked Rahman if it should be released separately as an album of sorts. It is the best of his works," he revealed. 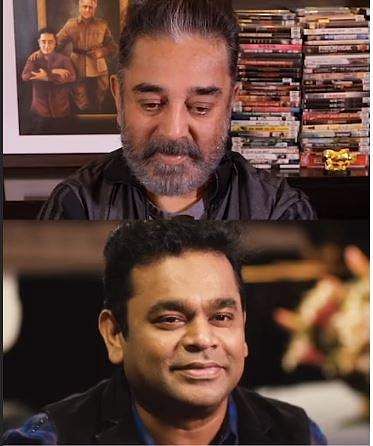 When Rahman was asked to share his thoughts on Kamal as a lyricist, the composer said, "When you speak to him, you realise, apart from acting, he studies so much. He has read so much about all the religions. He is a university by himself and a reservoir of a lot of knowledge. I have met with him for about 10 days. Every minute has been quality time."

Both Kamal and Rahman agreed that good work will get recognised one way or the other. Rahman recalled how a foreigner came running to him to appreciate his songs for Dil Se, which turned out to be a box office disappointment. Kamal, in turn, shared about how his house looked like a funeral day on the day of Hey Ram's release.

Talking about the impact of cinema on our music, Kamal opined that the former has cannibalised the latter. "Our great music tradition has been eaten into by cinema. AR Rahman has a lot to offer than just film songs. He should do something outside the realms of cinema."

Rahman agreed, "I feel very suffocated when someone asks me to do something I have done before. That's done. It has been eaten into, and I don't want to do it again."

Kamal Haasan and AR Rahman are next teaming up for the film Thalaivan Irukiran. They last worked together in Thenali, which was released in 2000. The upcoming film thus marks their first collaboration in 20 years.