Mammootty will complete 48 years in the film industry today, and to celebrate, fans have started a 'fastest tweet' marathon

Mammootty will complete 48 years in the film industry today, and to celebrate, fans have started a 'fastest tweet' marathon.

The specialty of this tweet? It carries the hashtag #48YearsOfMammoottysm, along with a line or more about the megastar's accomplishments or just a simple picture tweet with the aforementioned hashtag. So far, over 700K tweets have been posted in under 5 hours, the highest for any Indian actor. The number is expected to cross 1 million in a couple of hours. 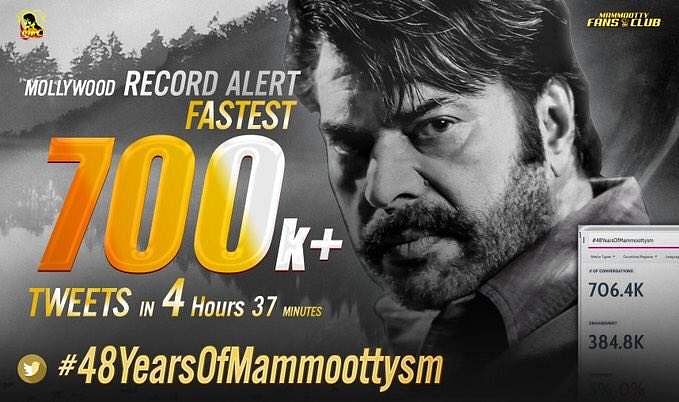 A former advocate, Mammootty made his acting debut (uncredited) in a bit part in the film Anubhavangal Palichakal, starring Prem Nazir and Sathyan. It was released on August 6, 1971. Since then he has appeared in over 400 films, made in six different languages.

2019 is turning out to be a great year for the actor, with his films Peranbu, Yatra, MadhuraRaja, and Unda getting both critical acclaim and significant box office success. He has a promising line-up of films coming up next that includes the historical action epic Maamangam, Ganagandharvan (in which he plays a singer), and Shylock (a bilingual with Rajkiran and Meena).