Director Don Hall: Raya is the most badass Disney Princess

Disney’s push for Asian representation caused a stir with the controversial release of Mulan last year. So it’s only natural to wonder if their next, the sprawling animation epic Raya and the Last Dragon, will deliver on its word. Set in the fantasy world of Kumandra, it’s the first Disney adventure inspired by Southeast Asian culture. It follows Raya, a fallen princess questing to find the last dragon and prevent the apocalypse. The fantastical world is rooted in cultural specificity, highlighting the mythology, art, cuisine and architecture of countries like Thailand, Laos, Vietnam, Cambodia, Indonesia, and others.

“We let the story guide our research and inspirations,” says co-director Carlos López Estrada. “We didn’t want the film to just tick off boxes. We didn’t want it to say, ‘Here’s us showing diversity or representation or strong female leads.’ It really comes from a core — which I hope comes across in the movie.”

For the film, Carlos has teamed up with Don Hall, co-director on past Disney films like Winnie The Pooh, Big Hero Six, and Moana. Like the Polynesian protagonist of the last, Raya too is a Disney Princess — and the first of Southeast Asian origin. Hall, for his part, places her quite high in the pantheon.

“Raya is probably the most badass of all the princesses,” Hall says. “Being a warrior, she identifies more as a guardian of the dragon than a princess. But she has a lot of other traits — vulnerability, humour, love of family —- that connects her to other princesses.”

A major through-line in Raya’s journey is her relationship with trust. Having lost her kingdom to feuding factions, Raya has lost faith in humanity. She has every reason to: her best friend, Namaari, is now her nemesis, and she encounters thieves and tricksters every step of the way. “The world is too messed up to trust anyone,” she tells Sisu — the goofy titular dragon — when they meet. Yet Sisu (who can take human form) reverses that logic. “Maybe it’s messed up because you don’t have trust?”

“That scene hit me hard,” says Kelly Marie Tran (The Last Jedi, The Rise of Skywalker), who voices Raya. “I think what makes it powerful is that they are both kind of right. It’s really about them trying to understand where the other person comes from.”

Awkwafina (Crazy Rich Asians, The Farewell), who voices Sisu, adds, “That line for me summed up the entire movie. It holds such weight when you apply that thinking to the world we live in.”

The actors weigh in on the representation debate surrounding the movie. “I never want to play a character who reiterates any sort of stereotype about a group of people,” assures Kelly Marie Tran, whose parents are Vietnamese but who grew up in the US. “Even if it’s not an Asian-centric cast,” ventures Awkwafina, “it’s important for me that my character is not one-dimensional. More than anything, I look for the heart of a story and what’s it trying to tell.” 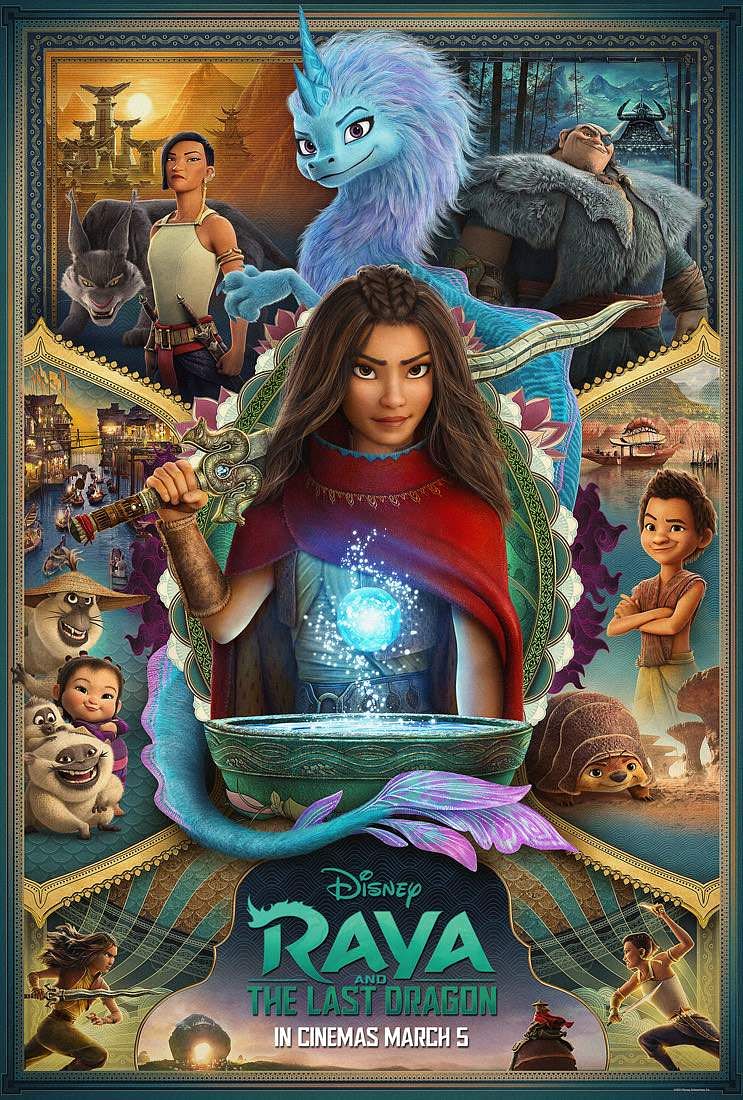 The makers of Raya and The Last Dragon enlisted a team of anthropologists to flesh out the world of Kumandra. Given the Southeast Asian setting, the influence of India and China inevitably spilled into the film. “There’s Sanskrit that’s shared among some of these countries,” details producer Osnat Shurer. “Also, many of our crew members were Indian. So when we were working on the wraps of the clothing, for example, we were referring to the dhoti as well as other styles.”

Indeed, much of the film’s look crosses the traditional with the modern. Hall says he wanted to push the technology in terms of lighting and performance, yet retain the signature Disney look. “This is a particular look we felt suited Raya really well,” he says. “But that doesn’t mean other films down the line need to look the same.” López Estrada points to the film’s colourful prologue as a nod to past styles. “It gave us an opportunity to create something that’s reminiscent of flat or 2-d animation. So yes, you can expect a lot of different visual styles filtering through the film.”

TAGS
Raya and the Last Dragon