Enable Javscript for better performance
Baahubali has done to Indian cinema what Star Wars did to the West: Rana Daggubati- Cinema express
ADVERTISEMENT

Baahubali has done to Indian cinema what Star Wars did to the West: Rana Daggubati

Rana talks about Baahubali, Haathi Mere Saathi, the much-publicised elephant killing, his plans in a post-Covid world, and more

It’s been ten years since Rana Daggubati first appeared onscreen as a young political heir in Sekhar Kammula’s Telugu film, Leader. Over the past ten years, Rana has learned about the power of being an actor. “You get to embody another person. Cinema, far away from the real world, is the closest thing to magic for me. When I pick a movie, I am excited about making the journey to another universe,” said Rana, in a chat arranged as part of Indulge Time Pass, a series of webinars organised by The New Indian Express group, and hosted by senior journalist Kaveree Bamzai.

From bulking up to look the part of Bhallala Deva in the Baahubali franchise to losing weight to play a jungle dweller in his upcoming film, Prabhu Solomon’s Haathi Mere Saathi (Kaadan in Tamil and Aranya in Telugu), Rana was asked about his physical transformation for films. "Cinema is a visual medium. Haathi Mere Saathi is the toughest film I've shot, and this is coming from someone who has shot Baahubali 2. I had to bear the weight of the trunk of an elephant, on my shoulders. The trunk would easily weigh 160-170 kgs. Each of these films allows me to live a new experience. Only cinema can provide this.” 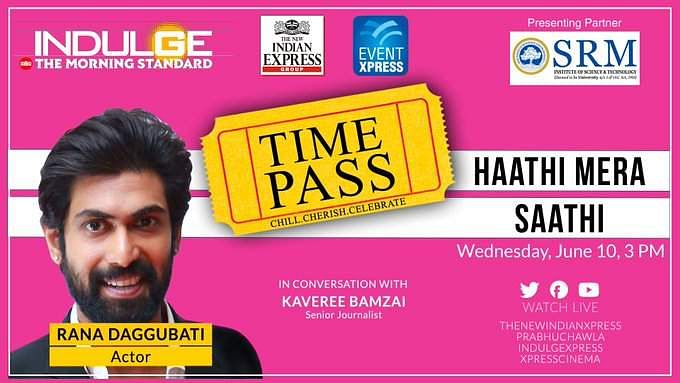 Responding to the recent much-publicised killing of an elephant in Kerala, Rana said, “Having worked in the jungle for Haathi Mere Saathi, I can say for sure that a forest teaches you many things. It teaches you that creature is important to the planet. As humans, we do the most unnatural things and drive away what's right for the Earth. This incident was probably the cruellest act of mankind. We need awareness, education, and stricter laws in place.”

Invariably, the topic of Baahubali came up. “The film didn’t change just my life; it has changed Indian cinema forever. The scale of thought has changed. The movies we make have changed. This impact is no less than what Star Wars did to the West,” says the self-proclaimed Star Wars geek who has a George Lucas mural in his office and a lightsaber on his desk.

The present lockdown too is rapidly changing the ever-evolving medium of entertainment consumption. Rana, who has financial interests in both theatres and OTT, believes content will always be the king, but the way it is monetised will undergo a tectonic change. “Spectacle-based content will still be theatrical. Drama driven, long-form storytelling will move to OTT,” says Rana, adding, “People will continue to get entertained in all mediums… We want to be in each of those places.”