A fortnightly column that focuses on notable content available on the streaming platforms around you, and this week it is Edge of the Knife, currently streaming on MUBI

In my last column, I had written about the importance of films being made by people from oppressed and marginalised communities; the film I'm writing about today is again one such. Edge of the Knife, currently streaming on MUBI, is particularly precious because it's in a language spoken by less than 20 people (at the time of its making — there are now a few more speakers, thanks in part to this project). It's the first feature film made in the Haida language, spoken on the Haida Gwaii archipelago off the North Western coast of Canada and Alaska.

H0aida is an endangered language, in large part due to the arrival of Europeans on those shores and the forced assimilation that ensued — indigenous children were packed off by the thousands to residential schools where they were encouraged to speak only in English, and in some cases, punished cruelly for speaking in their native tongue. Most members of the community are thus unable to speak the language today. In fact, the crew of Edge of the Knife, despite having an all-Haida cast, needed to give all the actors special training to speak the language. One 70+-year-old actor's statement in an interview was quite heartrending to read. She mentioned how good it felt to speak the language again, mainly because she could do so out loud without being afraid. She was one of the children sent to those residential schools, you see, where she had had her fingernails yanked out for speaking the indigenous language.

Edge of the Knife is co-directed by Haida artist Gwaai Edenshaw (who co-wrote it along with his brother and two others) and Tsilhqot'in filmmaker Helen Haig-Brown (she too is from a marginalised indigenous community in British Columbia) and has a crew that is also mainly comprised of indigenous people. Set in the 19th century, before the colonisation of the region, it is based on Haida folklore of how trauma drives a man into the forest, where isolation and physical deprivation turns him into a Gaagiixiid (wild man). The story is essentially an allegory for mental breakdown, but the makers weave an interesting plot around this core — one that is filled with drama — and use this as a medium to document the language and culture of the Haida people.

They show us scenes of everyday life — of people gathering clams, cleaning an octopus, preparing fish, carving masks, weaving hats, women sitting around a fire and chatting as they work — and show us these in loving detail. The cinematography deserves special mention. Sure, the film being shot on location on these islands, some of the most breathtaking places on earth, helps make the film look good, but there's more here. The usage of tracking shots to show the passing of time and the closeups throughout the film are equally lovely. Two sequences stand out for me. One is the way a certain tragic scene is shot: the lead up to it, the use of focus, and then the closeup at the end, all add up beautifully. Another comes right after the title card. It's a minute-long sequence that shows a wooden mask being expertly carved by an old man. This mask is the same one the film opens with, as it's placed on a fire and slowly consumed. Throughout the film, we see it being created. First carved, then painted, and subsequently used in a performance/dance.

Also seen throughout the film is the old man who makes this mask. He appears to be the elder of the tribe and is consulted on matters of ritual, but is otherwise left to do his own thing. But this old man — and some old chatty women — infuse some welcome and rather surprising humour into the otherwise serious proceedings. One of these old women tries to goad this man into going and having a serious talk with a younger man in need of guidance. When he fails to budge, she literally pokes him with a stick in a way that is so familiar. Haven't we seen such women in our lives too? It brings out an instant grin. A little later, this man, who hardly has any lines in the film, says one of the funniest ones. A line that made me laugh out loud, that seems so incongruous at first, but when you think about it, is completely true to life. There's drama in life, but there's also humour, and a variety of moments: Quiet, playful, tender... 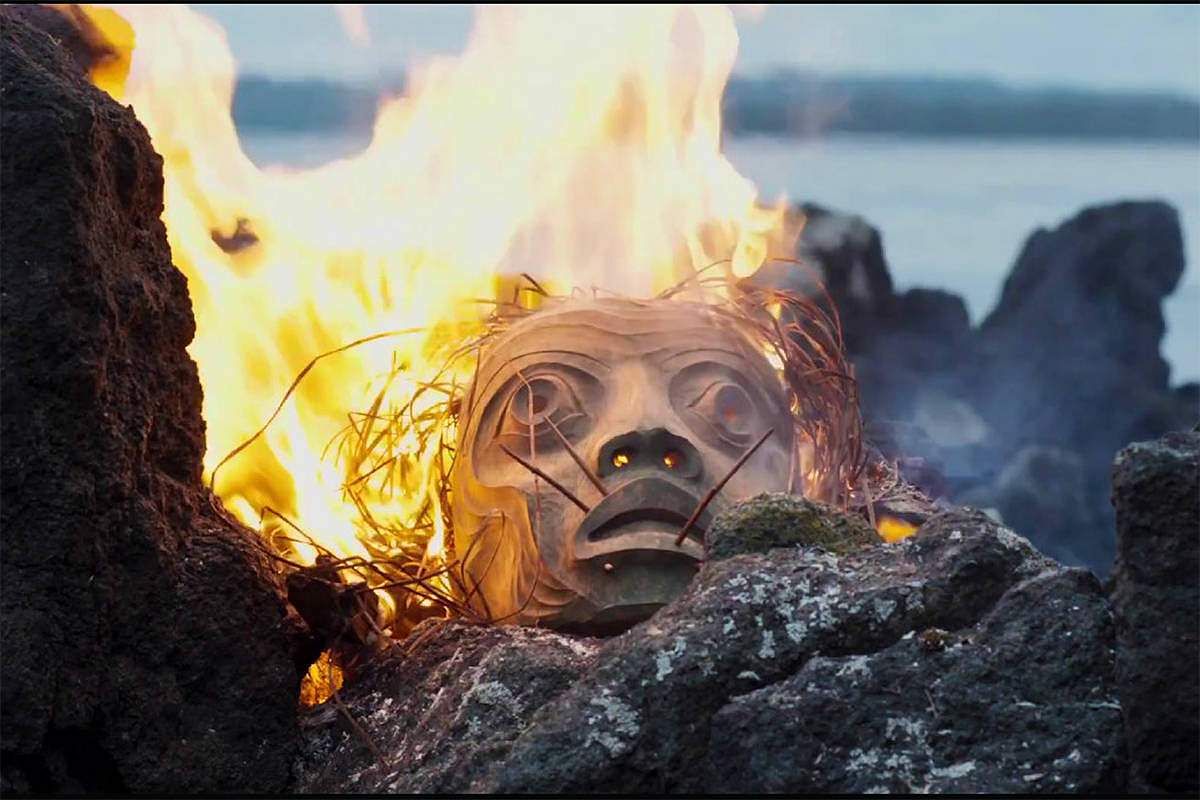 The makers of Edge of the Knife show us all of these using these fictional characters, and they record, nay register, the lives of the Haida people. But more importantly, by telling their story in their own language, they allow us to hear their voices. Gwaai Edenshaw, in the same interview referred to before, had mentioned that this project was an act of resistance to what was imposed on them. "The secrets of who we are wrapped up in our language. It's how we think," he said. This was what was taken away from the Haida people — their identity. A girl in the film says at one point, "I wish people could find their voice." Well, Edenshaw and his team have with this film. And I hope it rings loud and clear.