Despite all the well-known delays, Gypsy has been subjected to, it’s almost frightening how relevant the film is today, and the issues it delves on: Hindu-Muslim conflict

The passion in Raju Murugan’s voice is palpable. You can see he really cares. He really wants to mount resistance against a cartload of issues: Rightwing extremism, suppression of women, religious fundamentalism, hate politics, food politics, caste oppression, patriarchy… Gypsy has every single one of these issues crammed into it with differing periods of focus, when each of these issues are potent enough to be the singular focus of an entire feature film. Given the film’s ambition to cover a range of national issues, it almost feels like a writer moving from one paragraph to another as he makes long leaps between issues to take down. The problem here, of course, is marrying such forceful writing into a story that engages and affects. This is where Gypsy falters. Of course, it’s anybody’s guess how much of the film’s jerky shifts are a consequence of the censor board’s seemingly disproportionate wrath. Despite all the well-known delays the film has been subjected to, it’s almost frightening how relevant the film is today, and the issues it delves on: Hindu-Muslim conflict, right-wing extremism, foot soldiers being manipulated by politicians, orchestrated riots… For having the gall to take on such issues, I feel quite a bit of fondness for Gypsy and its maker.

The eponymous hero of this film, Gypsy (Jiiva), is a unique Tamil cinema character. He is, as the name indicates, a gypsy, whose nomadic existence takes him across the country. You could argue that Gypsy is posited as the ideal man by this film. He’s a man without a last name, without a religion or caste. He speaks several languages and can do many jobs. Perhaps because society and its humans can scarcely understand him, his closest friend is a horse named Che (no points for making the evident connection to that over-romanticised Cuban revolutionary, Che Guevara). Guevara’s name and his photograph have, today, been turned into symbols of uprising, with pop culture understanding of him conveniently neglecting his many far-from-ideal actions. I briefly touch upon symbolism here because this is a film that shows quite a bit of understanding about how symbols work. You can see this through posters of Gypsy’s concert. More importantly, you can see this through two photographs from a riot coming to be seen as symbols of oppression. A victim, Waheeda (Natasha Singh) begs in fright, while the assailant bears over her with a weapon, thriving in his power. Gypsy digs further into these two characters, and tries to understand the people they are, and how the aftermath of such a riot would work out for them. It’s fascinating that the film gets into these spaces.

The film also, through its lead woman character, Waheeda, shows how religion and patriarchy combine to asphyxiate women. Waheeda’s father (Lal Jose), a devout Muslim, is a sexist. And despite this man’s misgivings, the film resists the temptation to paint him as an evil caricature. This is a man who believes in his fundamentalist interpretation of his religious text and is the sort to have Gypsy tied to a tree. He’s also the sort to move on quickly and invite him to his daughter’s wedding. However, the film makes it abundantly clear that his household, his way of life, is a prison for women. Women barely talk, can barely laugh. When Waheeda is seen to be a bit too evidently happy, her father makes plans to get her married. Something about her momentary joy threatens his sense of authority. Marriage, here, is another form of enslavement. You see this when Waheeda’s fiance has his mother slaving away, and he says he’s marrying in the hope that his wife can replace his mother. What does Waheeda want? Nobody cares. When did prisoners get a say anyway?

Raju Murugan makes this visually clear with a shot of Waheeda standing behind a gate with bars, and the prison imagery is complete. She peeks through the bars at Gypsy’s liberated life, and finally, muster the will power to open the gate. She tentatively steps into his world, and out of her prison, for the first time. It’s beautiful when eventually, she’s able to muster a smile, a laugh, words, a dance… This woman, who’d never as much been allowed to lift her head and look men in the eye. I wish Gypsy had been a more focussed love story. 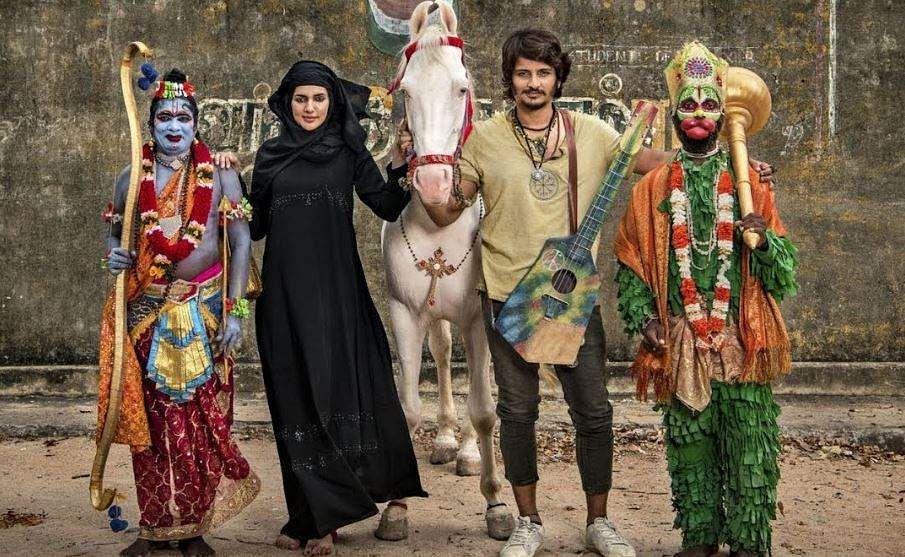 This film’s love story, however, is merely a tool with which to try and take on the big, bad system. While on the romance, I still found it slightly disconcerting when Gypsy’s foster father keeps insisting that should he find ‘the one’—“the girl designed for every person”—he should never let go; that he should hold on and keep pursuing. It’s the same sort of problematic advice given by Nagesh to Dhanush in Kadhal Kondein. I think it’s a restrictive way of looking at relationships and at best, is naïve in its simplicity.

I loved the film’s music—its songs, its BGM. Santhosh Narayanan’s music is at the heart of this film, powering it with thumping beats of protest and electrifying guitar riffs of resistance. Some of the film’s strongest portions, involving the call for a revolution towards the end, almost feel like a music video. It’s a call to end ‘theevira vyaadhi’. British Indian musician Susheela Raman makes a cameo, and gets the space to perform a track or two. Malayalam actor Sunny Wayne is quite powerful in the role of a communist leader who shows that it’s only with the power of numbers, with an organised resistance, that you can hope to fight being victimised by the forces at large. The scene in which Gypsy relieves himself at a police station is a statement by itself, much like that line he says towards the end: “With all your guys and bullets, you can’t do sh**.”

The film has its moments, no doubt. But you can’t shake off the feeling that it’s biting way more than it can chew. It’s a film that denounces religion with its protagonist (Neitzsche said, “God is dead”, while as Susheela Raman sings, the background text reads, “Where is God?”), but then again, it’s also a film that tries very had to establish it’s not biased against any one religion. Gypsy’s foster father, in talking about his jobs, covers the mosque, church, and the gurudwara. Gypsy, in talking about the losses he has suffered, covers both Hindu and Muslim extremism. After a point, this careful neutrality begins to seem like a tedious exercise.

With almost every scene, Raju Murugan’s looking to make a social point. Take even the name Gypsy bestows on his daughter: Ven Pura. We get it, it’s a symbol of peace and ties in nicely with the theme of the film. But does it also feel contrived? Unfortunately, yes. Gypsy, in its present censor-mutilated form I imagine, is less an affecting feature film with finesse and more a bunch of super-relevant snapshots that attack the country’s subjugating forces. A better film may have helped ignite stronger fires, but hey, what do I know? If Draupadhi can do so well…