Lyca Productions, which is bankrolling this film, released photos of Rajinikanth dubbing for his role as Aaditya Arunasalam

With Darbar set for release this Pongal, post-production work of the AR Murugadoss-directorial is going on in full swing. Lyca Productions, which is bankrolling this film, released photos of Rajinikanth dubbing for his role as Aaditya Arunasalam. 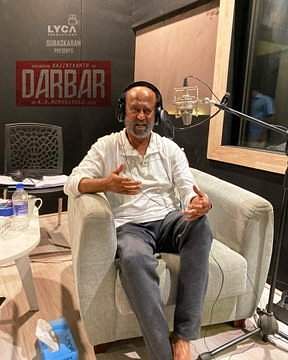 The film, which sees Rajinikanth donning the khaki for the first time in 27 years, also stars Nayanthara, Prateik Babbar, Nivetha Thomas, Dalip Tahil, and Suniel Shetty in important roles. Anirudh Ravichander, who composed music for Petta, has joined hands with Rajinikanth for the second time in Darbar.

Santhosh Sivan and Sreekar Prasad are in charge of cinematography and editing, respectively.

Meanwhile, Rajinikanth is set to begin shooting for his next film, Thalaivar 168, which will be directed by Siva, and bankrolled by Sun Pictures. It was announced yesterday that D Imman has been roped in as the composer for this film.