This trailer hints that Nerkonda Paarvai is as much about Shraddha, Arjun, Andrea, Abhirami, and Rangaraj, as it is about Ajith, and this is always a good thing

A rock concert. A courtroom. A cramped house. A solitary bench in a huge park. Nerkonda Paarvai's trailer establishes the film's setting very clearly. Three women, three men, their actions, and one Ajith Kumar, who utters the first dialogue of the trailer. "Are you a virgin," he asks a clearly disheveled Shraddha Srinath, and her response sets the tone in this Tamil remake of 2016 Hindi film, Pink.

The people who have watched Pink know what is in store in this legal thriller. For the others, the neatly-cut trailer gives you a neat idea of what the film is about. Something has been done to these three women — Shraddha, Abhirami Venkatachalam, Andrea Tariang. There are three men — Arjun Chidambaram, Aswin Rao and Sujith Shankar — who seem to be the perpetrators. Though a remake, it is clear from the trailer that there have been additions to suit the local audience. While the courtroom exchanges between Ajith and Rangaraj Pandey remain largely faithful to the Shoojit Sircar-directorial, there are certain additions that are incorporated to suit the stature of the star in the centre of Nerkonda Paarvai — Ajith.

The three women are pushed to a corner not just by the perpetrated crime, but the society's 'paarvai' too. A random neighbour, a random hotel employee, a woman cop, and a relentless Rangaraj Pandey. Tensions ensue, volatile words are exchanged, a lot of 'objections' flow around.

Towards the end of the trailer, Arjun Chidambaram, who reprises Angad Bedi's role from the original, bellows out on how certain kind of women deserve a certain kind of treatment. Ajith directs his 'ner paarvai' to Arjun and says, "Nadakkaadhu... Nadakka koodaadhu" Is this a play on the iconic "No means no" dialogue from Pink?

Then, Yuvan's rousing soundtrack reminds you that the silver-haired no-nonsense lawyer who, in his deep baritone, defending the three women, is not just any actor, but a major star in Tamil cinema. A fight sequence with a hoodied Ajith reminds you of the "changes made to suit local sensibilities' in Nerkonda Paarvai. 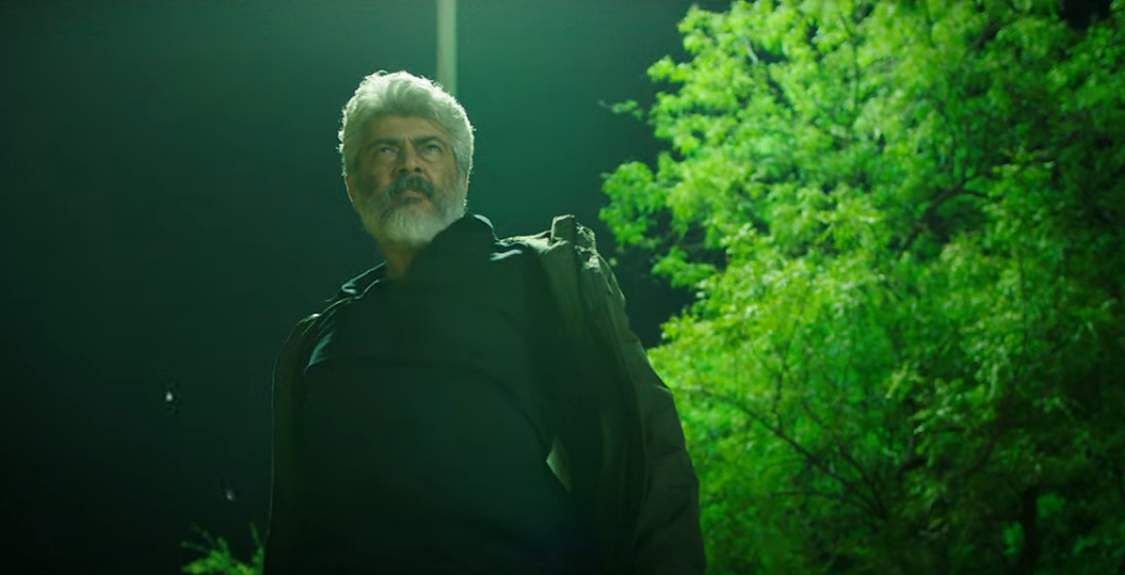 The trailer ends with Ajith mouthing a dialogue to a police officer in the film who didn't follow the rule book to help powerful people cut corners, which will surely be used in multiple contexts. "Oruthar mela neenga viswasam kaatradhukaaga, innoruthara yen asinga paduthareenga?" (Why do you insult someone else to show your loyalty to someone?) Personally, I believe this can also be used to police fans of various actors who indulge in mudslinging on social media and other platforms.

After watching the 125-second trailer, I can't help but say that this is the most excited I've been for an Ajith film in quite a long time. I literally had goosebumps hearing Ajith deliver that last dialogue. This trailer hints that Nerkonda Paarvai is as much about Shraddha, Arjun, Andrea, Abhirami, and Rangaraj, as it is about Ajith, and this is always a good thing. We don't yet catch a glimpse of Vidya Balan though.

My biggest concern while hearing the news about Ajith being a part of Pink's remake was if the star would even do such a film? Will he be able to step into the really big shoes of Amitabh Bachchan? Will Vinoth be able to cater to the die-hard fans who fill up the theatres as early as 4 am?

Well, the answer is a resounding yes. See you in theatres on August 10.