With the enduring Aaranya Kaandam completing ten years this month, we take a look at how it encapsulates the objectives and themes of director Thiagarajan Kumararaja

An intensely personal way of reckoning with the passage of time is through films watched. A recent trend in Film Twitter saw users posting titles of films they watched during important stages of their life, films that formed an inseparable part of their coming-of-age and celebration. Birthdays of artists and film anniversaries offer the chance to revive discourses on a film, and examine how well it has aged, while furthering our level of engagement with it besides cementing the role of its existence as a work of art in the present cultural context. A formidable film to revisit here is Thiagarajan Kumararaja’s audacious debut, Aaranya Kaandam, which completed a decade earlier this month. 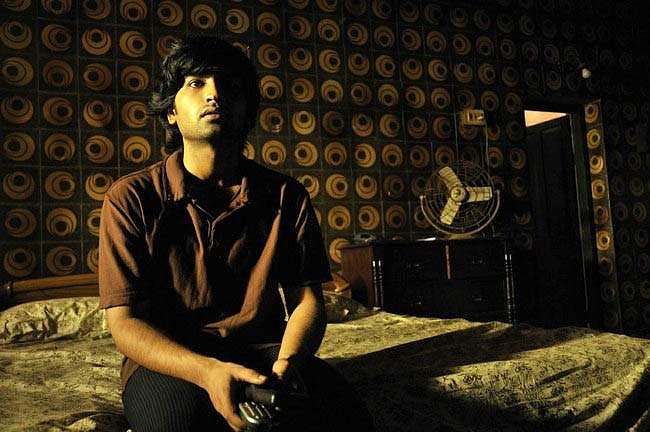 Kumararaja’s darkly comical, riotously entertaining two films over the last decade, are supreme works of storytelling that revel in meta touches. The obsessive pop culture referencing in his films, the easter-egg strewn narratives, the lyrical and precise detailing and dynamic aesthetics, have all been copiously explored over the years. Here, then, is a brief glimpse into certain thematic aspects Kumararaja explores in cinema as he audaciously pursues the interaction of two major forces in life: desire and destiny. Driven by desire, his characters find their way through the labyrinth of life, heading towards destiny. Their earthly journey doused in primal passion also acquires a taste of philosophy. This finds a literal expression in the excerpt from Volgavil Irunthu Gangai Varai which bookends Kumararaja’s debut. Justice for each character is dictated by their needs, their desires.

Kumararaja has offered a startling analogy while speaking about the pleasures of movie-watching. What he says is subjective and yet movingly sensual, binding an otherwise vicarious experience to the visceral. I am not reading too much for he did remark that the thrilling moments of good cinema made him “orgasm every single time”. By equating the pleasure of movie watching to an intimate bodily experience, he exudes the sense of what filmmaking is to him: transcendental and thrilling. Kumararaja’s production house is named Tyler Durden and Kino Fist, a homage to Fincher’s 2001 film Fight Club and the legacy of Sergei Eisenstein. The name is revelatory of how cinema emerges as an alter-ego of sorts for the maker and the viewer, a liberating form to indulge in irreverence and impossibilities. Often compared to Tarantino for his hyperlink narrative style and pop culture obsession, Thiagarajan Kumararaja uncannily binds himself to the American filmmaker even in the naming of his production house. Tarantino named his film company ‘A Band Apart’ after Jean-Luc Godard’s 1964 classic, Bande à part. These are historic instances of a filmmaking culture birthed in homage to an enormous film love. 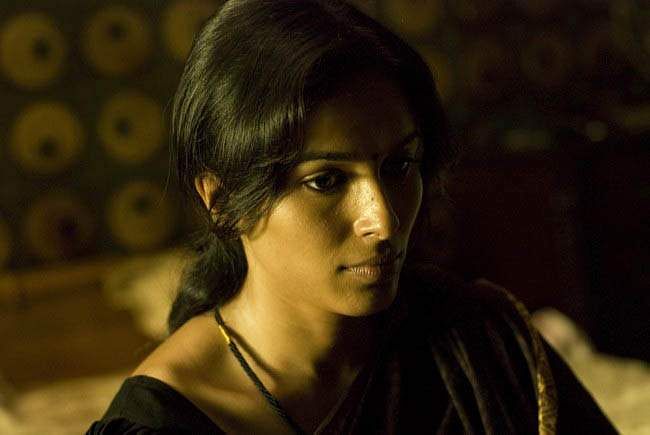 Listening to this filmmaker’s interviews, you understand that he is not pretentiously profound, but modest, and simply grounded. Post the release of Super Deluxe, an interesting trivia about the film which awed his fans who had already accorded him a cult status is the amount of time Kumararaja invested in getting his shots right. For instance, it’s said that there were a hundred takes in which Leela slaps Arputham when she confronts him in the hospital.

This exercise in perfection reveals that there is a rigour to his ease and an eloquence to his elusiveness that seep into the medium of his art, cinema. He pours in his deepest contemplations and intimate reflections on screen, seldom commenting on the ideological aspects of his story elsewhere. There is a trickier side to this as well when we struggle to distinguish the characters from the creators as we attempt to understand them on a deeper level, but that is a conversation for another day, one that might dangerously go in circles if you are only interested in viewing characters through a strictly moral lens.

Once upon a time… Kumararaja’s films are contemporary stories, modern in their core and yet fable-like in how the filmmaker introduces his people and their plight to us. He packs in elements of his films—the central themes, amorality and the giddying collision of different lives—through curious monologues. In the trailer of Aaranya Kaandam narrated in a Villu-paatu like style by Guru Somasundaram, Kumararaja hints at a role- reversal that is central to his tale, “Appan pillaiyaaguraan, pillai appanaaguraan (The father becomes the child, and the child becomes the father).” This does not merely apply to Kaalaiyan and his son Kodukapulli; this role reversal is also found in Subbu’s deception, in Pasupathi’s ambition and in Singa Perumal’s betrayal. Disruption of conventional roles continues throughout the film as the world of these characters turn topsy-turvy in a day.

The trailer of Super Deluxe is deliciously layered with a mythological edge that yields rightly to the cosmic chaos of the tale. A person walking through the wilderness is chased to a cliff edge by a hunting tiger, ready to devour him. A snake slithers around his body as he hangs above an abyss. When he spots a honeycomb in a branch of the tree, he nevertheless indulges in an intoxicating drop of sweet honey. The fable and the repetitive style of its narration are open to numerous interpretations, luring us, teasing us to interact with the story. Nature is cunning in its murderous tendencies and fleeting pleasures. Despite the awareness that life has its end in death, we relish the joy of living. There are many possible readings here. In line with the idea of desire, destiny and death, we can take the symbolic drop of honey to be an ephemeral bliss that makes us forget the more urgent problems. A pleasure, sensual in its nature. It ironically ties to the story of Vaembu’s lover and to the cosmic encounter of the boys.

The monologue speaks to the natural tendency of humankind which when consumed by unsettling torment inherently revolts in enjoying the little drop of sweetness. A revolt that invokes what Simone De Beauvoir writes about eroticism, a theme Kumararaja has taken on in his two films: “There is in eroticism a revolt of the instant against time, of the individual against the universal.” With freer expressions of human desire and its varied forms, Kumararaja’s universe of stories complexly entangle themselves in moral questions, underlining the answers in the simple nature of our species. The themes become more pronounced in his second film, extending to identity, relationships, and universality. 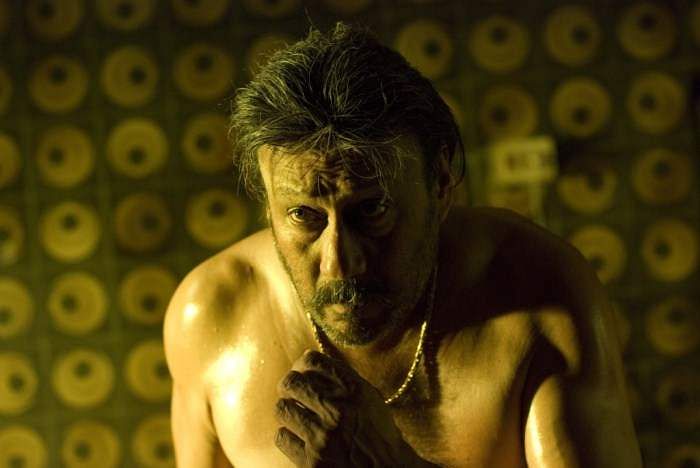 Kumararaja’s films are rife with insecure, flawed male characters, unabashed of their limitations and yet, distressingly aware of it. He does not chastise his women too. The films fascinatingly explore toxic masculinity, chiefly through the father-son dynamic. A central idea of patriarchy is the father figure. A father-son relationship exists between SingaPerumal and his protégé, Pasupathi. The aging patriarch who lords over the empire of crime is as clownish as he is menacing, threatened by his diminishing power. The film itself begins in a tense moment of his impotence which culminates in frustration and cruelty. Kodukapuli’s father Kaalaiyan is a foolish self-pitying blabbermouth. The son is not bound to his dad by any affection but an earnest sense of duty which unsettles us, making us even smile a little when he bluntly tells Pasupathi why he was desperate to save his father. He is asked, “Unakku appaana pidikkuma (Do you like your father?)” He replies, “Illa, aanaa avaru yen appa (no, but he is still my father).”

In Arputham’s maniacal devotion to the divine saviour figure, we see the attachment of a disciple to the almighty father. The Disciple chides God when tortured by fundamental questions of faith. Arputham’s delusion of salvation reduces him to a father who is a mere impediment to the survival of his son. His insecurities, selfishness, and ideas of sin masquerade as reverence towards God. The endearing story of Raasukutty, non-judgmental in his love for Shilpa, wishes for us to see the notions of fatherhood constructed by the society.

In a compelling point in Aaranya Kaandam, Kumararaja posits the bloody and ridiculous battle of male egos in a metaphoric cockfight in which the birds become phallic equivalents of the men, pushing them to the kill after a humiliating defeat. Setting the spirit of this film in the wilderness of life, naming characters after animals and birds, the filmmaker seeks to root his story in the most primal nature of man, allowing freer outlet to the human tendencies for violence, lust, and hunt. Kumararaja does this without forgoing his love for mythology.

Aaranya Kaandam is an idiosyncratic reimagination of Ramayana. Here, Subbu is the incarnation of Sita. A cunning fox amidst the scheming ruthless men, she uses her wit to hustle her way out of captivity. Subbu is the only significant female character in this all-male ensemble. Kasturi, Pasupathi’s wife appears only for a couple of minutes. Situating Subbu in the midst of all these men, the film offers a powerful spin on the Smurfette principle. This term originates from the Smurf movie which features 99 Smurfs in the village but only one Smurfette. It is used in reference to films which predominantly revolve around male characters, relegating its women to the periphery. The sole female is often stereotyped as excessively graceful, an idealised image of femininity. Dismantling this trope, Subbu’s journey is an ascent to domination. 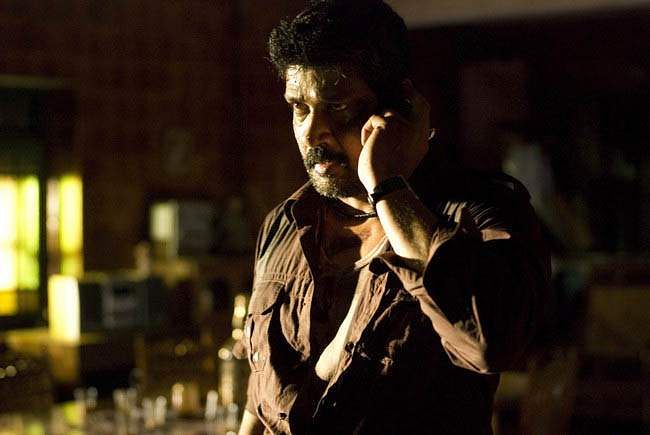 Grandly philosophical, Kumararaja’s films do not interest themselves in the right and wrong but in subjective, often selfish desires. The final monologue in Super Deluxe directs us to the filmmaker’s preoccupation with the metaphysical question, as he unites what is carnal with the abstract. His film literally has celestial characters, and each act sends ripples across cosmos and time. In contemplation along these lines of spiritual questions, the films become spiritual and endlessly exciting. The pop culture references in his movies bring a layered nuance to his narrative, subtly commenting on the culture around driving these people.

In its kitschy treatment of pop culture, Kumararaja’s films draw us to Anurag Kashyap’s Gangs of Wasseypur. In the opening of Kashyap’s sprawling two-part crime drama, the title song of the famous Hindi soap opera, Kyunki saas bhi kabhi bahu thi, plays as a feuding family sets out to murder its in-laws. So much for upholding family values. The obsessive Bollywood craze among the young characters, the brothers of Faizal Khan, alerts us to the altered notions of violence stylised by these movies. Violence is no longer a necessity; it emerges as a glory hailed by the alpha heroes. This is true of the way in which desire plays out in Kumararaja’s films. He also leaves us to wonder if it is a meta joke that he cast Manushya Puthiran to play the doctor offering a doctrine on sex, simplifying the matters of the heart. There is an enjoyable irony to it for Manushya Puthiran is a poet eloquent in professing the mysteries, the endless torments of love and longing. For once, he is not in awe of love, not in mourning of it but in possession of an ultimate wisdom of the same that he even goes on to note the profound truths of the universe. The pop culture reference continues critically in Mughil when he says that he wishes to become an actor so that he can soon win potential political power.
These intriguing thematic aspects, subtle critique of popular culture and a meta level engagement with movies itself add to the unique flavor of Kumararaja’s brand of cinema, which we hope to see more of in the coming years. And do I dare say, more frequently?