A supervillain for a superstar

With Darbar getting criticism for its weak villain, we take a trip back in time to acknowledge some of the best villains who have faced off with the Superstar

It is often said about cinema that it is tough for a hero to stand out if not for a good villain. It gets even tougher when a supervillain needs to be envisaged for a superhero. And as recent Tamil films have shown, it is toughest to fashion out a strong villain for a demi-god of a hero, and in Tamil cinema, it doesn't get bigger than Rajinikanth. How do you sell Rajinikanth losing to someone? How do you convince the audience that Rajinikanth is vulnerable enough? While there might be a lot more factors that are in play when casting the antagonist in a Rajinikanth film, over the past 25-30 years, there is one question--can the villain be better than Raghuvaran's Mark Antony in Baasha?

Such is the impact of that one film and one actor that almost no villain since has been able to create that kind of euphoria in a Rajinikanth film since then. Though Mark Antony does overshadow the wide spectrum of villains Rajinikanth has vanquished over the years, he did face pretty formidable resistance from some of Tamil cinema's finest actors.

Sathyaraj -  The villain of villains

The similarities between Rajinikanth and Sathyaraj can't be unseen. Both of them started their career with minor roles, found their identity by playing antagonists, and won over the fans through their commercial entertainers. But Sathyaraj has truly been the 'Villadhi Villain' of his times, having played the nemesis of Rajini in more than nine films and it is always a delight to see this dynamic duo take on each other. 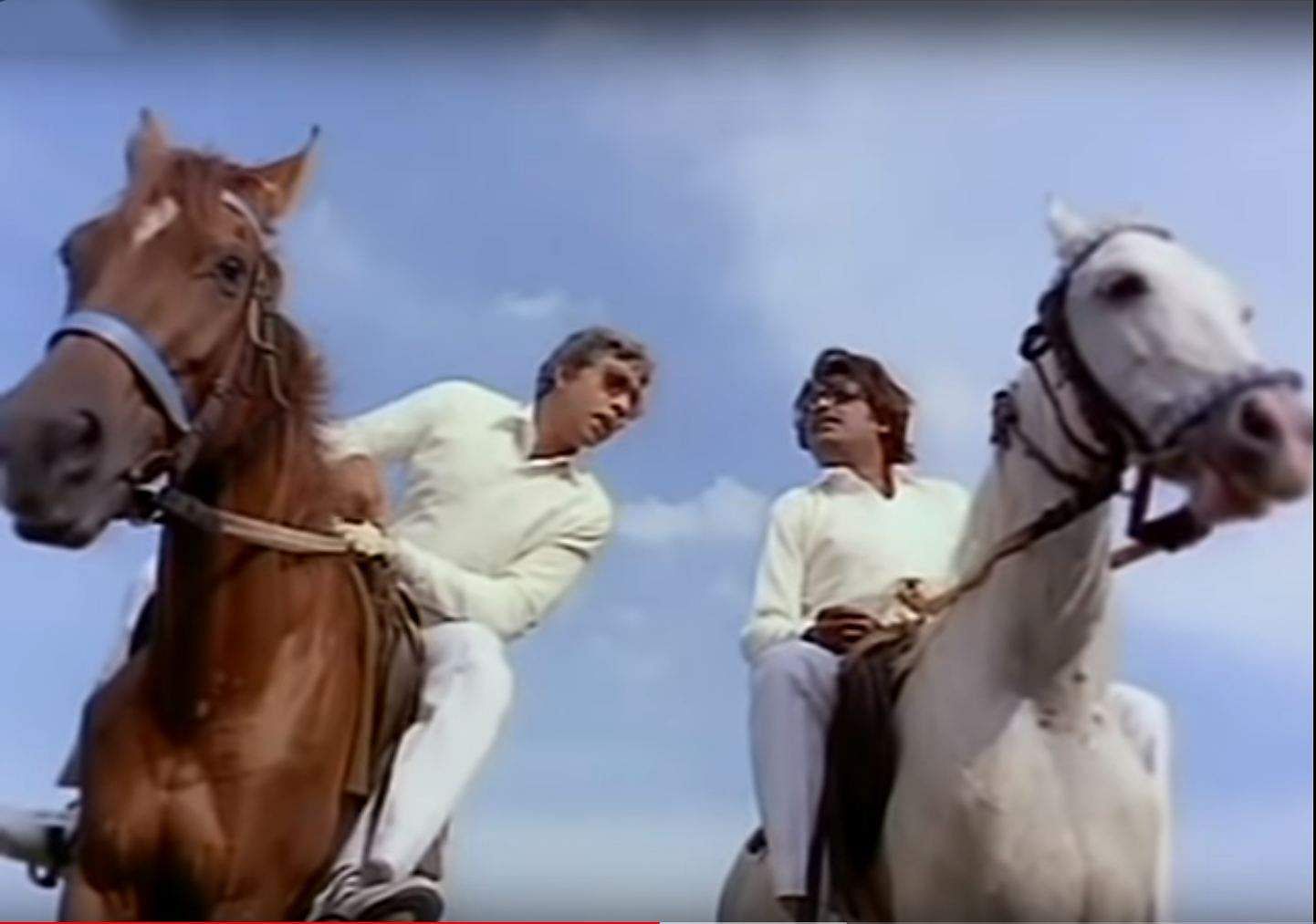 Though every negative role of Sathyaraj has been iconic, his Gopinath in Mr Bharath set a new benchmark for the baddies in a Superstar film and the streak was only broken by the irrepressible Raghuvaran after almost a decade. Shankar tried to recreate this magic by roping in Sathyaraj to play the role of Suman in Sivaji and Danny Denzongpa in Enthiran, but unfortunately, the actor turned down the offer citing that he couldn't settle for a film that seemed lesser than Mr Bharath. We wish Sathyaraj had taken. Imagine Kasimedu Aadhi going, "Ennama kannu, indha Aadhi character eh purinjika maatengriye!" during the interval block of Sivaji.

Nana Patekar - The Evil in White

Speaking at the audio launch of Kaala, Rajinikanth said, “In my entire career, I have found only two villains, who were challenging to me. One is Baasha’s Antony (Raghuvaran) and the other is Padayappa’s Neelambari (Ramya Krishnan). And, now, it is Hari Dhadha! You wait and see… Enakke oru maja vandhurchu… vaa pathurlaamnu.” 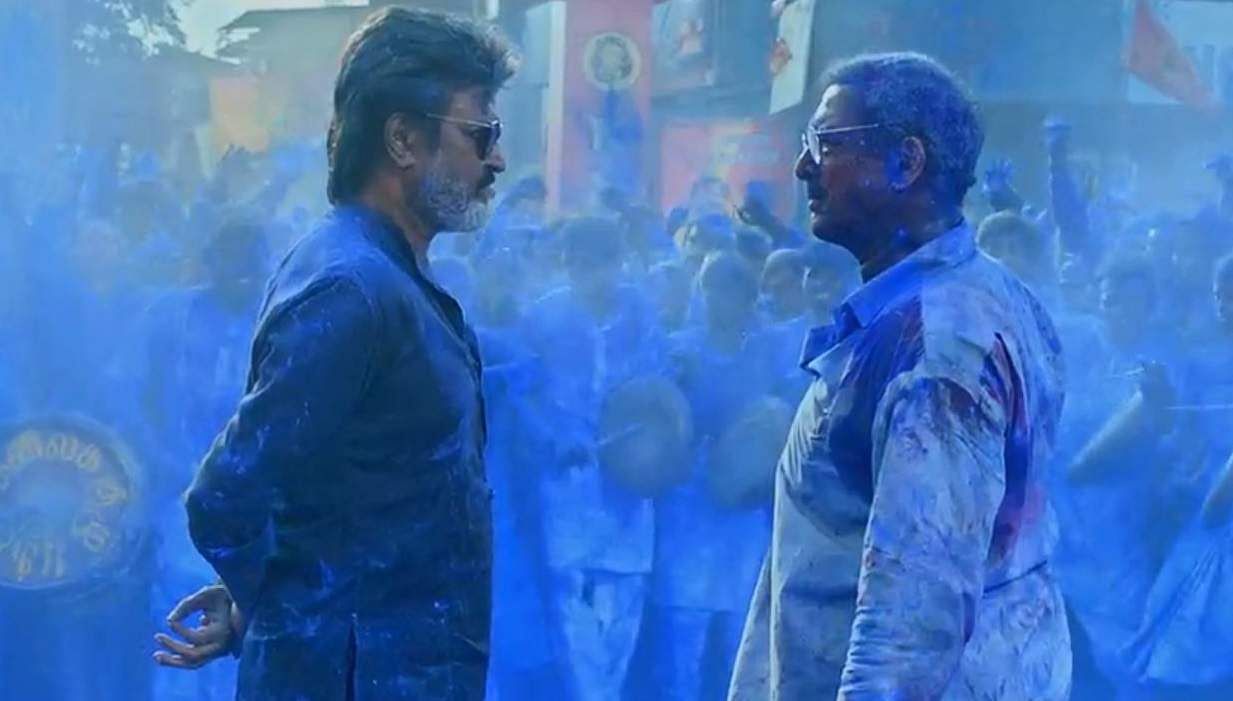 But of course, Hari Dhadha was not much spoken about once the film was released. He was not exalted to the levels of Mark Antony and Neelambari. Yet, Haridev Abhyankar is the most unique of all Rajinikanth’s villains. He was not just someone who was in the Superstar’s vazhi. Hari Dhadha represented something abstract. It was not just about ‘Kaala vs Hari Dhadha’ or Rajinikanth vs Nana Patekar. It was more like Batman vs Joker. Or simply put, it was the good old fight: light vs darkness (just that here the light is clad in black and dark in white).

In terms of performance, Nana Patekar didn’t have much to do as Hari Dhadha is a man of few words. If restraint can be considered to be an important aspect of acting, then Patekar, it must be said, has aced the role of this cunning politician. A hat tip to his efforts in dubbing the Tamil dialogues himself. For once, the accent was justified.

You can’t speak of villains in Rajinikanth films without talking of Neelambari. It is one of those rare characters where most of the adjectives you typically ascribe to the hero, apply — like the dialogue, which is attributed to Padaiyappa in the film, “Vayasanalum, un style um azhagum unna vitu pogave illa.” Strong, sophisticated, headstrong, powerful and intelligent, Neelambari and Padaiyappa were two sides of the same coin. 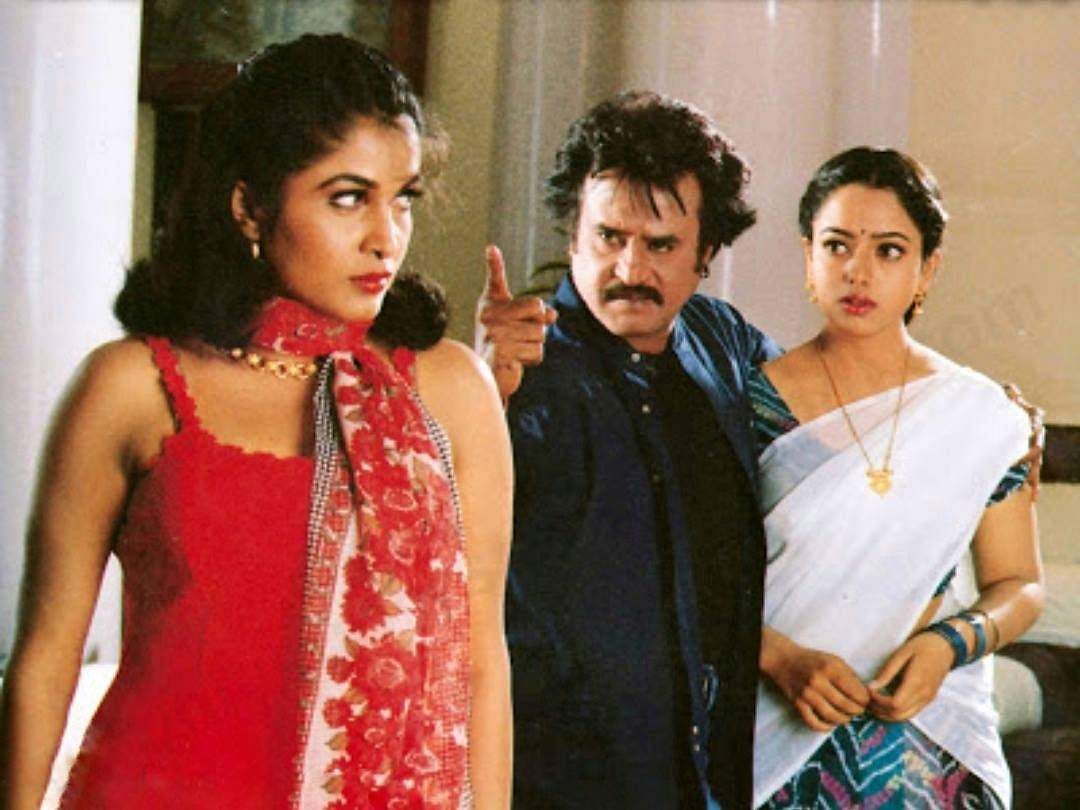 And Ramya Krishnan plays this assertive woman with unbridled power. In an era where women were constantly relegated to playing meek roles, Neelambari was a landmark shift in the narrative, even if it wasn’t followed up with characters of similar calibre. Of course, there's the mansplaining and the sexism which we realise in retrospect. But Neelambari handled it all like a boss, with confidence and authority that could quieten even the alpha in the room. No wonder then that Rajinikanth says that he has only had two challenging villains so far, Raghuvaran’s Mark Antony, and Ramya Krishnan’s Neelambari.

One of those villains who was instrumental in making Rajini the star into a Superstar is Radharavi. The duo, who began their careers almost together, rose in their respective ladders, from playing the typical hero and villain fitting the archetype to experimenting on various characters within those parameters.

Take Guru Sishyan (1988), for example. Rajini's Raja played the usual cheerful conman in extreme to Muthuraj (played by Radharavi), who is a rapist and a murderer. Something which both the actors loved and were loved doing was humour and Rajadhi Raja (1988) is a classic example where both of them stuck to the hero-villain paradigm in a hilarious backdrop. 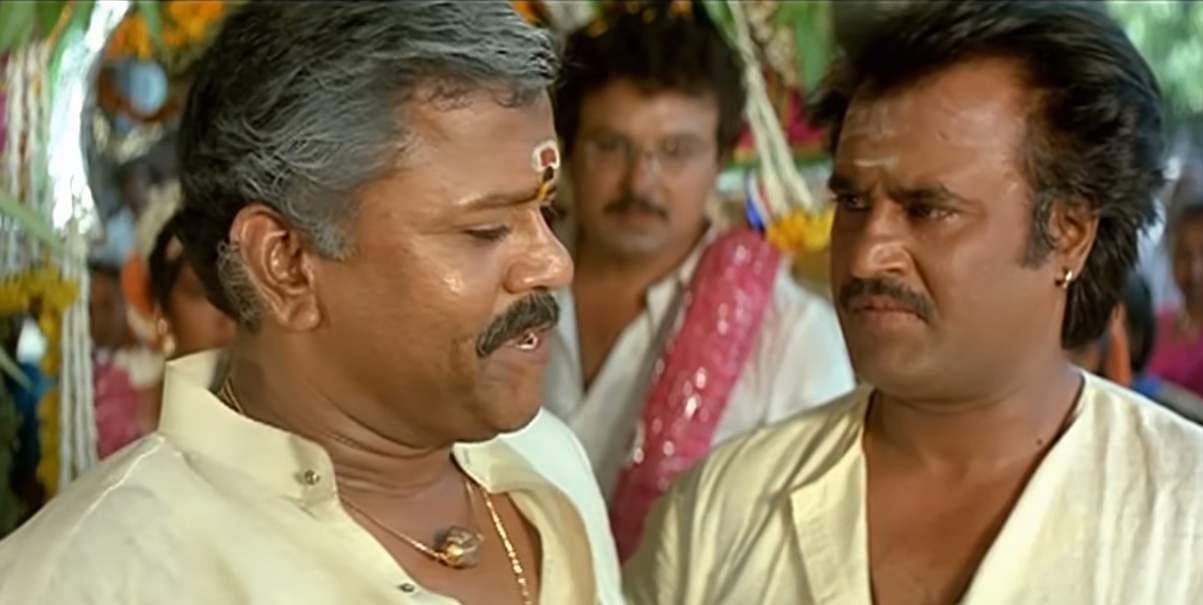 After sticking to the basic baddie in films such as Uzhaippali and Panakkaran, Radharavi experimented with unconventional roles in the 90s. Though Ramya Krishnan stole the show as Neelambari in Padayappa, Radharavi's character as her father who keeps Padayappa's family at bay during their tough times and tries to renew the relationship once they get rich again, showed us that he can also play a negative character who is made so due to family circumstances. That's something he did in some of his best works in a Rajini film during the 90s —Muthu and Annamalai where he played the menacing chieftain Ambalathar and an avaricious Gangadharan respectively— and retained it till his last film with Rajini, Lingaa. Who can forget his iconic line from Annamalai, "Kooti kazhichu paaru, kanakku seriya varum".

Rajinikanth - The Villain in the Mirror

Before he became the much-loved, can-do-no-bad Superstar, Rajinikanth was someone who revelled in playing an abusive husband, a sadistic bully, an ungrateful friend, and even an adult filmmaker. Even though he's been playing roles with grey shades in his inimitable style even after turning hero, the full-fledged villain roles have become sparse over the years. We did see flashes of the dormant antagonist in him in films like Netrikann, Billa, and even briefly in Chandramukhi. But then, almost a decade back, Rajinikanth played one of the most memorable cinema villains of the 21st century — Chitti in Enthiran.

It was fitting that in a film about an all-powerful, unscrupulous man-made marvel, it was Rajinikanth who was the Enthiran. While the 'good' robot was well...nice, it is the Red Chip Enthiran who oozes menace in a surprisingly delectable way. The film gets elevated once villain Rajini takes control of the proceedings, and what's better than one Rajinikanth? Thousands of them! And the sounds of the whistles and applause bringing the roof down in 2010 for the iconic Black Sheep scene still rings loud and clear. 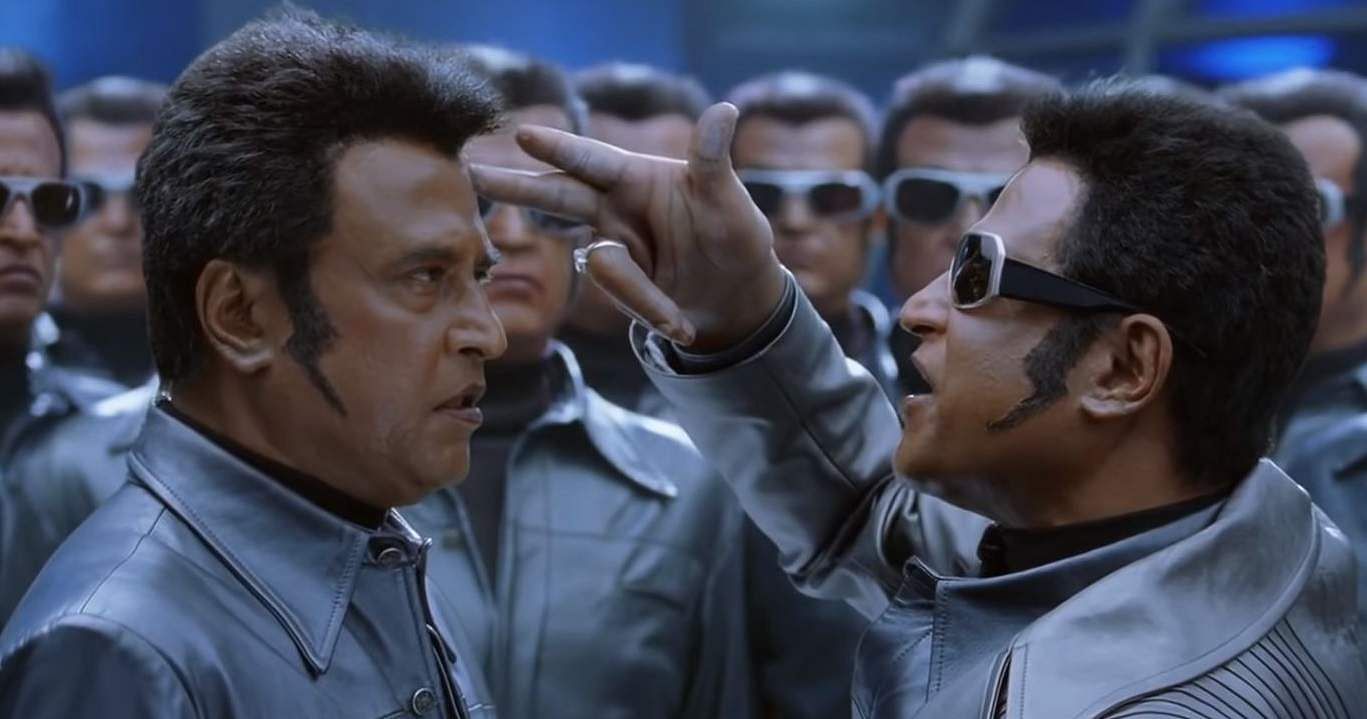 It is always fun to see  Rajinikanth being allowed to loosen up, put his guard down, and do what he decided to do when he opened rusty gates and walked into a house in the 1975 film Aboorva Ragangal — act without inhibition.

So, Mirror mirror on the wall, who's the baddest villain of them all?