The first look also has the words 'Happy Deepavali Nanba' on the bottom left corner, thereby confirming the film's release date as Diwali 2019

The first look and title of Vijay's most awaited sixty-third film are here. The Atlee-directorial, starring Vijay as a footballer, has been titled Bigil. The first look shows Vijay in two avatars. The younger-looking Vijay is seen sporting a red t-shirt, with a design that is similar to that of the sports merchandise brand Umbro. The shirt has the number 5 on it — probably to denote the number of letters in the word Bigil — which is also his name in the film. It also has the Tamilnadu Football Association logo  on it, denoting that the character is a state player. He's seen with a football, which is also red in colour, with the Manchester United logo on it.

The older looking Vijay dons a shirt and a veshti, with a salt-and-pepper hairdo. His right feet rests on a wooden butcher block that has a boning knife lodged to it echoing the background — a fish market. This character also wears a chain that's peeping out of his shirt, with a pendant that looks circular. Could it be football again? 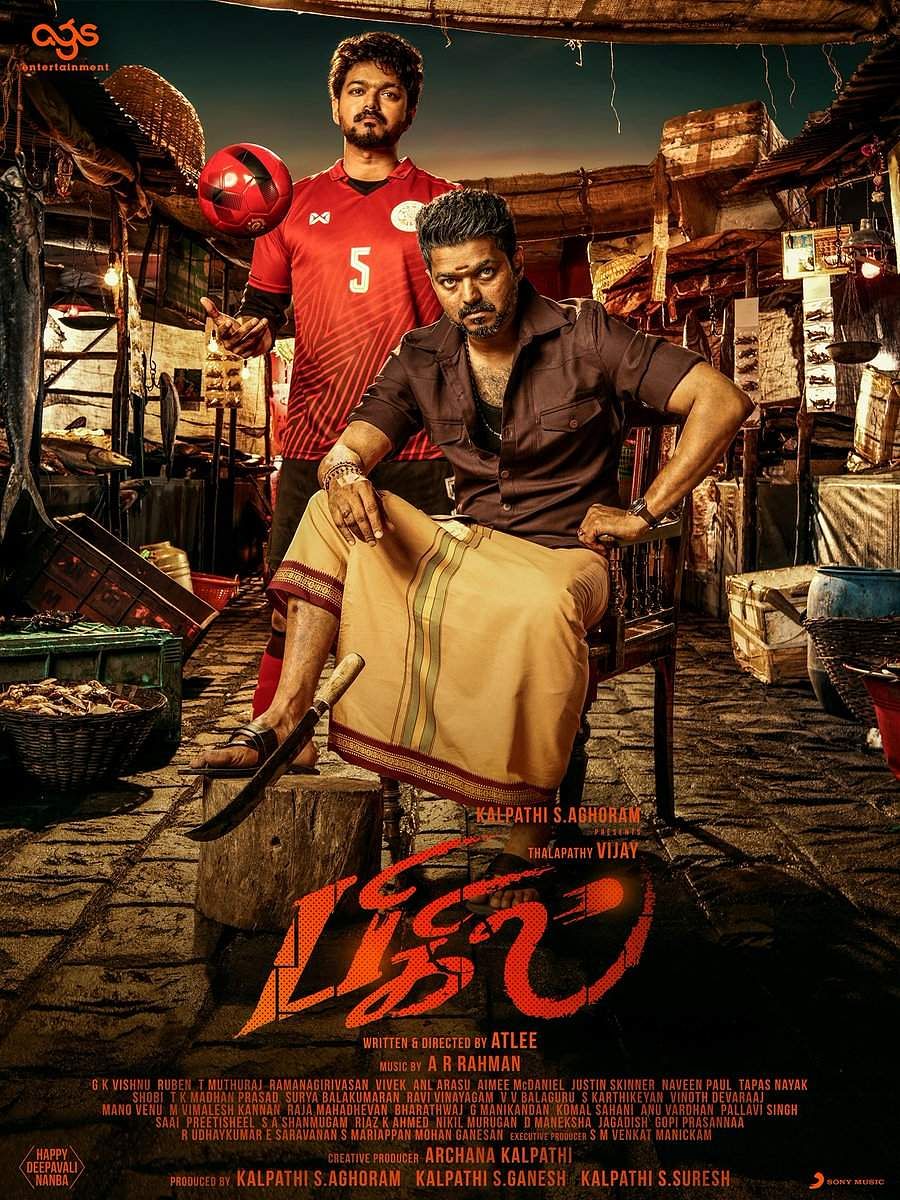 While many people online are claiming that it will be a story of a footballer and his father, a don in North Madras, both the avatars have a scar on their right shin, which seems to suggest that they might be the same character from different times. The colour of their eye lenses, however, seems to be different. But this could be similar to the first look of Theri, where three variations of Vijay were shown and it was speculated that Vijay would be playing triple roles, but he ended up playing just one role. (The triple role, incidentally, happened in the actor-director's second collaboration, Mersal.)

Unlike the previous Atlee-Vijay films, there are a lot of elements in Bigil's first look. The two characters are juxtaposed on an empty alleyway of a fish market. The background is laden with stalls which, while being devoid of people, appear to be full of that day's catch. Along with a basket of crabs, there are different types of fish on display as well as wooden poles with packets of dried fish (karuvaadu) hanging from them.

The title logo, coloured in sunrise red, is also embossed on an aerial view of a football court. Both the English and Tamil logos have a flying football incorporated in them. The first look also has the words 'Happy Deepavali Nanba' on the bottom left corner, thereby confirming the film's release date as Diwali 2019.

While we already know that the film will be about women's football, one can speculate that Vijay's character would that be of an ex-footballer, who has grown older into a local don and due to a turn of events, is forced to coach a group of young female footballers. Or is the son a young footballer and his father a local don? Only time will tell.