The film, which marks the directorial debut of M Bharat Raj, is bankrolled by Rishab Shetty Films

Actor-director Rishab Shetty, who had kept his fans waiting with curiosity over the last two days, has finally treated them to the first-look poster of his upcoming film. Touted to be an action-comedy, the film is titled Hero. It marks the directorial debut of Bharat Raj. What is interesting about this project is that the entire film was shot during the lockdown period.

Hero has Rishab playing the role of a hairstylist. The poster shows a closeup of Rishab's face between a part of scissors. The film has Ganavi Laxman playing the female lead. Ganavi is yet another actor making her transition from the small screen to tinsel town.

The film with limited actors also features Pramod Shetty and Manjunath of Ugramm fame as part of the cast. 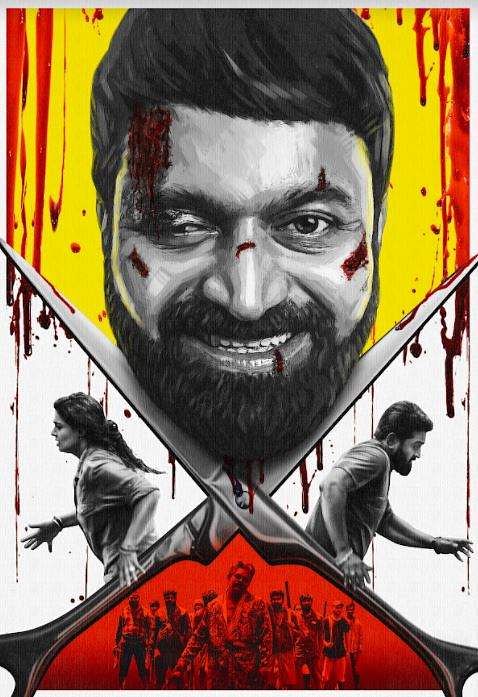 An incident can turn out a normal person into a hero — this is the basic line of the story. The debutant director believes in the quote 'You cannot be a hero without being a coward', and opines that every individual is a hero, provided he has the strength to fight against all odds.

The film is produced under Rishab Shetty's home banner and according to the actor-producer, Hero is going to be a thorough entertainer.

The best part of this film for Rishab and the team was shooting during the lockdown period. "We did the muhurath for Rudraprayag, however the film could not go on floors as planned. Post this we were supposed to begin Harikathe Alla Giri Kathe and Laughing Buddha. Unfortunately, the shooting for the two got postponed due to the pandemic situation. At one point, we feared being in Bengaluru because of the increasing number of cases, and just when we were planning to head to our home town, this project happened," reveals Rishab.

The film was shot in 50 days. Hero has music scored by B Ajaneesh Lokanath and has Aravind Kashyap cranking the camera. Stunt master Vikram, who has worked in KGF Chapter 1 and Avane Srimannarayana, has choreographed the stunts for Hero.

Rishab, who has established himself as a director, came to the limelight as an actor with Bell Bottom. His second film, Garuda Gamana, is yet to see its release. Hero marks his third venture.

Meanwhile, Bharat will next direct Pramod Shetty in Laughing Buddha.