Nani 28 is directed by Vivek Athreya, who is known for Mental Madilo and Brochevarevarura

Nani and Malayalam actor Nazriya are teaming up for a film that's tentatively called Nani 28. The film is directed by Vivek Athreya, who is known for the films, Mental Madilo and Brochevarevarura.

It is now rumoured that the upcoming film has been titled Ante Sundaraniki. However, there is no official confirmation of this yet. It is said that the makers will reveal the title and the first-look poster on November 21. 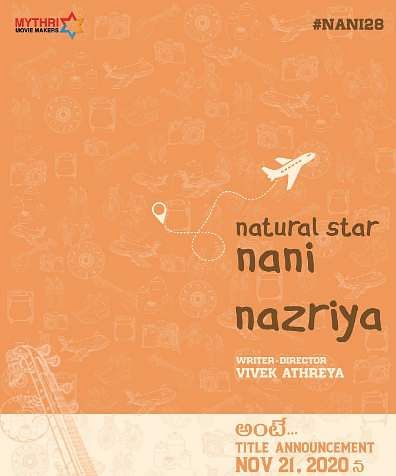 Nani 28 is touted to be a romantic comedy. The makers are planning to wrap up the shoot in a short period.

Nani is was last seen in the film V, which received mixed reviews from the audience and the critics. Apart from Nani 28, he also has Tuck Jagadish, directed by Shiva Nirvana, in his kitty.