Rajinikanth admitted to Hyderabad hospital due to fluctuating blood pressure

Although Rajinikanth tested negative for COVID-19, he is under observation due to fluctuating BP and exhaustion

We had recently reported that the shooting of Rajinikanth's upcoming film, Annaatthe, was halted as multiple crew members tested positive for the coronavirus. Although Rajinikanth had then tested negative, and been quarantined as a precaution, he has now been admitted to Apollo Hospitals, Hyderabad, owing to fluctuating blood pressure and exhaustion.

In a statement, the hospital authorities said, "Mr Rajinikanth has been admitted in the hospital today in the morning. He was shooting for a movie in Hyderabad since the last 10 days. A couple of people on the sets tested positive for Covid-19. Mr Rajinikanth was tested on 22nd December for Covid-19 and he was negative. Since then he isolated himself and was monitored closely." 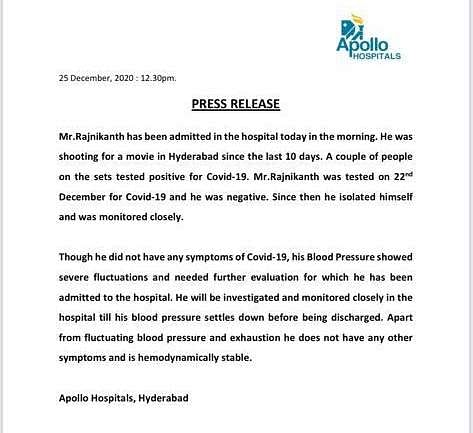 Earlier this week, the team of Annaatthe had been shooting indoors in a bio bubble, and reports emerged of unit members testing positive for the coronavirus. The film's production house Sun Pictures officially announced that four people had been affected and that Rajini and the rest of the team had tested negative for the virus.

Meanwhile, Rajinikanth is also gearing up for his political entry.