The singer, who was highly optimistic about his recovery, had previously shared via a video that he was doing well and expected to be back home soon

Veteran singer SP Balasubrahmanyam, who was diagnosed with COVID-19 on August 5, has suffered a serious setback in his health. A statement from MGM Healthcare, where the singer is currently admitted, says SPB has been moved to the Intensive Care Unit due to critical condition of his health and he is on life support now.

"He is currently under observation by the team and experts from critical care and his haemodynamic and clinical parameters are being closely monitored,” reads the statement. 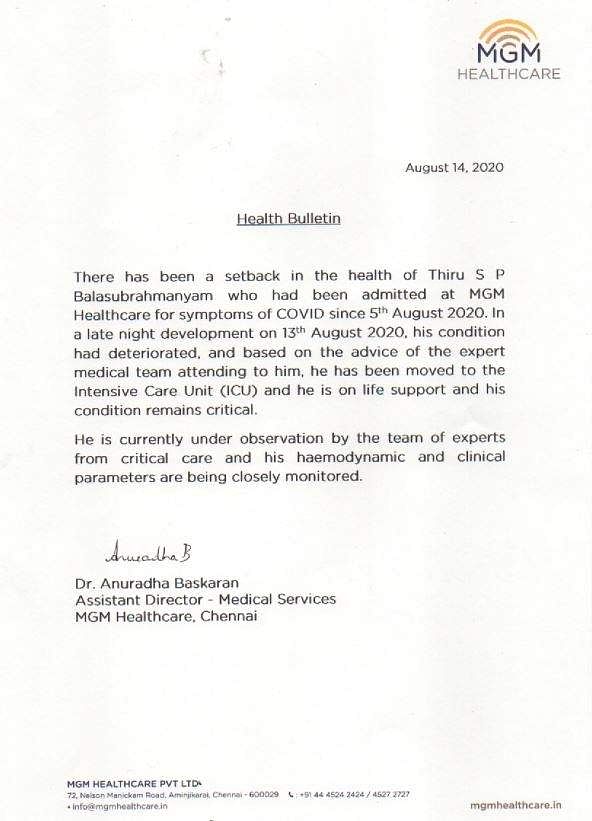 It may be recalled that SPB, who was highly optimistic about his recovery, had previously shared via a video that he was doing perfectly all right and would be back home soon.

SPB's son Charan has put out a statement, saying, "Thanks a lot for all your concern and enquiries about my father's health. He is in ICU under ventilation. His condition is stable. Don't believe rumours. We will keep you updated about his progress regularly. Thanks again."

Meanwhile, prayers and well wishes for the veteran singer have been pouring from all quarters on social media.

Composer AR Rahman, who has worked with SPB in numerous films, requested music fans to pray for the legend.

I request all the music fans to pray for this legend along with me ..#SPBalasubrahmanyam ..he has given us so much joy with his amazing voice! https://t.co/8r2TjQe6wj

Director Bharathiraja called SPB a strong man and a fighter. In his tweet, he also said that he is positive his friend will return home healthy soon.

Composer Anirudh Ravichander, who joined hands with SPB in Petta and Darbar, also tweeted that he is praying for the singer's speedy recovery.