The announcement comes in the wake of the gruesome death a 23-year-old software engineer, Subashree,  who came under the wheels of a water tanker, after a ADMK flex banner fell on her

With Vijay's upcoming film with Atlee, Bigil, in post production, the makers had recently announced that the film's grand audio launch will be held on September 19 at Sri Sairam Engineering College. Archana Kalpathi, the film's creative producer, took to Twitter to make the announcement, while also adding that live telecast of the event wouldn't be practically possible as it's a week day. She also tweeted that the event will be exclusively telecasted on September 22 at 6:30 PM on Sun TV.

Now, the latest development is that Thalapathy Vijay has issued a statement requesting his fan club members not to place hoardings and banners for the audio launch. This announcement comes in the wake of the shocking incident in Chennai, when a 23-year-old software engineer, Subashree, riding home after work was knocked off her bike and came under the wheels of a water tanker when a flex banner erected for the marriage of an AIADMK functionary’s son crashed on her near Pallikaranai in the Pallavaram-Thoraipakkam Radial Road. 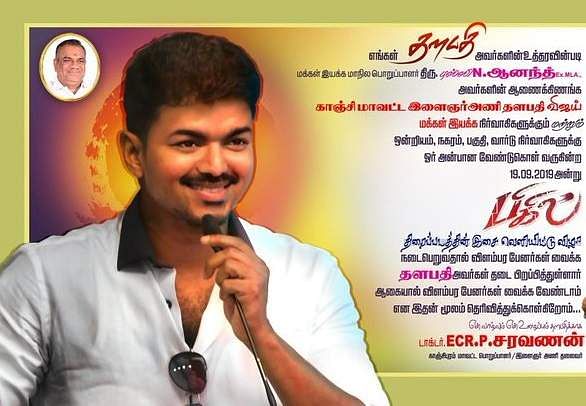 This stand taken by Vijay was widely welcomed on social media.

Bigil, meanwhile, is said to be a sports drama, with the Sarkar-actor playing dual roles of a son, who is a football player-turned-coach, and a gangster father. Starring Nayanthara as the female lead, the film also features Indhuja, Varsha Bollamma, Amritha, and Reba Monica John as footballers, whose team will be coached by Vijay's character. Apart from them, Jackie Shroff, Kathir, Vivekh, and Yogi Babu are also part of the Bigil, playing supporting characters.

Produced by AGS Entertainments, Bigil is slated for a Diwali release.