While the responses from within the film fraternity were initially slow, it has gradually picked up steam

Actor Radha Ravi, who had developed notoriety for being a rabble-rouser at film-related events has found himself in the eye of the storm, yet again, for his comments on Nayanthara during the trailer launch event of the Airaa actor's Kolaiyuthir Kaalam.

As a recent development, Radha Ravi was suspended from his party Dravida Munnetra Kazhagam today (25.03.19), for his derogatory remarks against Nayanthara.

MK Stalin the president of DMK, announced the suspension of Radha Ravi on his Twitter handle. He wrote, "The defamatory remarks made by actor Radha Ravi on the women in the film industry is highly condemnable. As a party which stands for the rights of women, we cannot tolerate such behaviour."

Radha Ravi addressed the media today and said, "My comments on Nayanthara have been misinterpreted and blown out of proportion. I do not want to apologise as I strongly believe I've said nothing wrong against her. But at the same time, I feel sorry if my comments had hurt her in any manner and I'm also ready to meet Nayanthara and Vignesh Shivan to clarify my statement." He also announced that he'll be resigning from DMK.

Meanwhile, the outrage over his statements continued to trickle in from the film fraternity, with actor and General Secretary of Nadigar Sagam, Vishal tweeting out his response,"

Dear #radharavi SIR.Yes as a gen Secy of Nadigar sangam I wish I had da pleasure of signing the letter of condemning u 4 yr stupidity n yr recent speech against women n particular.its snt 2 u.grow https://t.co/IgLu1huAfc yaself Ravi fm nowonwrds Coz u hv a woman s name n ya name.

Actor Varalaxmi Sarathkumar, who has always been vocal about such incidents plaguing the film industry put out strongly-worded tweets condemning the Saturday incident and urged fellow actors to take up the cudgels at least now.

Starting off with blaming the mindset, Varalaxmi said,

Shaming women,making offensive jokes on women (which they think is not offensive) degrading women, using women as eye candy have all bcom a part of this #filmindustry thanks to our previous generations of women n men who didn’t react n instead thought it was ok..this is our state

Only when it happens to u, u will realise what we were fighting for..if all the industry women stood up with @Chinmayi or me or the countless women during #metoo may b things would have changed.. silence isn’t gonna get us anywhere..#timesup every single woman has to stand up..

All these so called #film Sangams r run by a bunch of male chauvinists who will never act on anything n jus act like they support women, when in reality each of them has in one way or other contributed to this situation of women being degraded either in their reel or real lives

Warning about the ill-effects of not raising voice at the right time, Varalaxmi said,

If people are finding it funny that is the kind of world we have created by degrading ourselves n keeping silent for so many years of abuse..if we don’t start respecting ourselves..we can’t expect others to respect us.. speak up now..don’t wait until it happens to you n then cry

KJR Studios, who have bankrolled Nayanthara's Airaa, released a statement condemning the incident, and said, "We sincerely condemn Mr #RadhaRavi and will not cast him in any of our films and we will strongly advice our associates and friends in the industry not to cast him either." 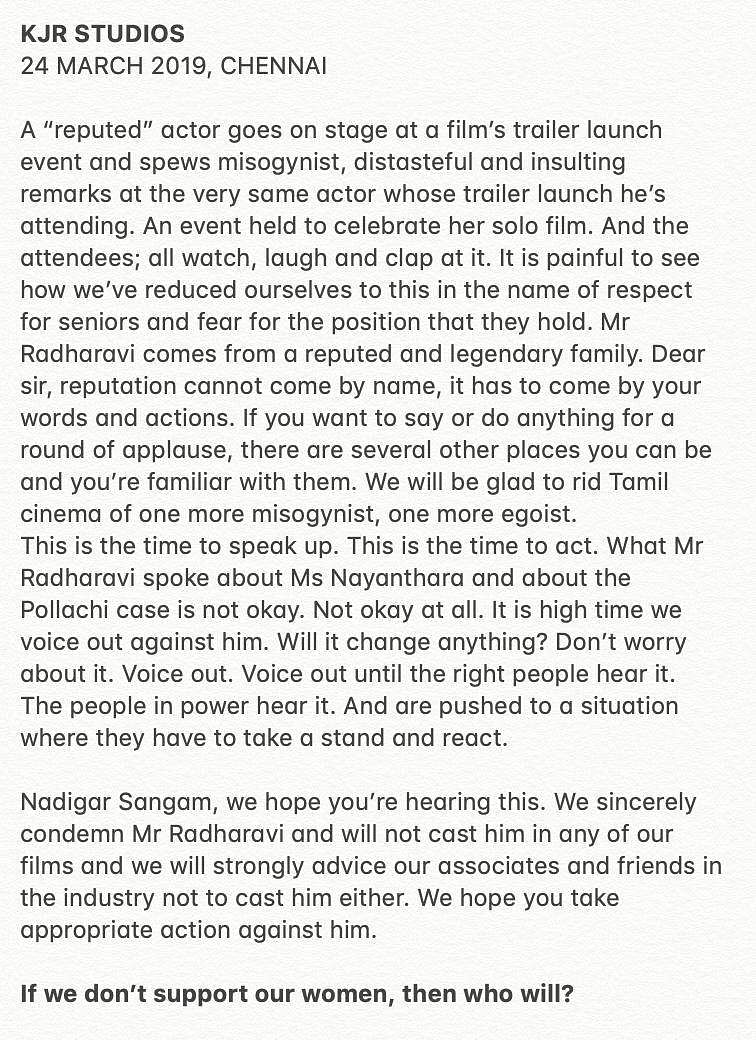 Meanwhile, Etcetera Entertainment's V Madhialagan, who are producing Kolayuthir Kaalam, clarified his stance over the controversy that occurred in their event, and said, "Radha Ravi is a very senior artist. On stage, when it happened, I didn't know how to react. There is no doubt that what was said at the event was completely wrong."

Upset by the incident Taapsee Pannu said," This is disgusting beyond words. Who asked him about casting prerequisites and is he the president of character certificate association? This comes for one of the strongest actresses of the industry, I can only wonder what he might have to say about others."

This is disgusting beyond words. Who asked him about casting pre requisites and is he the president of character certificate association? This comes for one of the strongest actresses of the industry,I can only wonder what he might have to say about others https://t.co/tFjTZ04gRB

Actor Rohini, who previously got expelled from the dubbing union by Radha Ravi, wrote,

If the Dubbing artists union committee members stood by me when I raised my voice against Radha Ravi for talking ill of women, there would have been some respect for the committee.
Instead he removed me from the committee

Samantha gave a sarcastic reply to Radha Ravi's actions on Twitter. She wrote,

Sighhh Mr.Radha Ravi the struggle to stay relevant . You’re a sad man and we all feel sorry for you . May your soul or whatever is left of it find peace. We ll send you tickets for Nayanthara’s next superhit film .. have some popcorn and take a chill pill.

(This is a developing story)