SPB and Ilayaraja come together again for Vijay Antony

When celebrities have a fallout, the topic is widely discussed by fans. One such famous controversy that broke the hearts of several Tamil cinema music fans was the one between Isaignani Ilaiyaraaja and singer SP Balasubrahmanyam in 2017.

Almost two years later, it now appears as if the two have mended their relationship. Ilaiyaraja has recently recorded a song in SP Balasubrahmanyam's voice for Vijay Antony's upcoming film, Tamizharasan.

SPB will also be a part of a four-hour-long live concert in Chennai by Ilaiyaraaja on the occasion of the latter's 76th birthday celebrations on June 2. 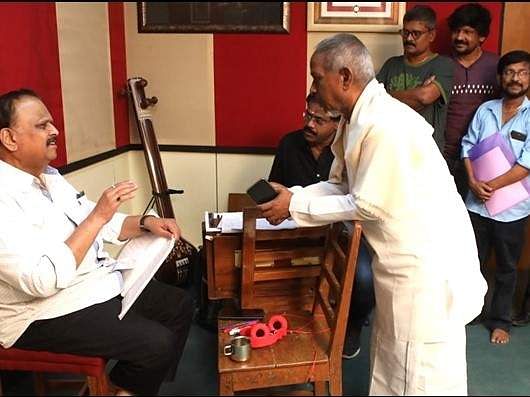 Notably, legendary singer Yesudas has also sung for Ilaiyarajaa in Tamizharasan. The song, Poruthathu pothum, will see the return of the duo, who last collaborated on Mammootty’s 2009 film Kerala Varma Pazhassi Raja.

Tamizharasan, which has Vijay Anotny playing a cop for the zsecond time in his career after Thimiru Pudichavan, also stars Ramya Nambeesan, Suresh Gopi, Sangeetha, and Chaya Singh. Sonu Sood plays the antagonist in the film, which is directed by Babu Yogeshwaran, who earlier made the 2005 Jayam Ravi-starrer Daas.