The council has announced three major changes in the existing film promotion strategies, to cut down the excessive expenses incurred to the producers

The Tamil Nadu Producers Council led by N Sekar, District Registrar (Admin), had released an official notice late on Monday, announcing three changes in its existing film promotion strategies, with a view to cut down the excessive expenses incurred to the producers. Firstly, it was decided that gifts or rewards to media persons would no longer be extended at press screenings, audio launches, and other promotional events.

The biggest among its decisions is the stand that it will henceforth 'ban media persons, who post abusive film reviews that contain personal attacks on film celebrities from attending all film-related events'. In addition, the council further threatened legal action on such reviewers.

Following outrage from media personnel, an emergency meeting was held today, and one of the prominent council members, Amma Creations T Siva, said, "We met the PROs and a select section of the press to discuss the new rules for film promotions. The problem is, hundreds of people, who are in no way connected to press or cinema, enter our events and screenings in the guise of reporters. Our first target is to stop them. Whenever we wish to honour and thank the press for being a great pillar of support, these impostors end up stealing their space. This is why we have decided to stop extras like gifts and food distribution; the hope is this will prevent them from attending our events."

He also feels that some unqualified people, posing as film reviewers, are hindering the commercial success of films. "A critic has all the rights to point out the pros and cons of a film, but they have no business asking the audience to see or not see a film. Some YouTubers even verbally abuse the cast and the crew under the guise of criticism. We want video reviews to be as dignified as the print ones. I believe that the decision to file cases on abusive reviewers will truly make a difference in the industry. 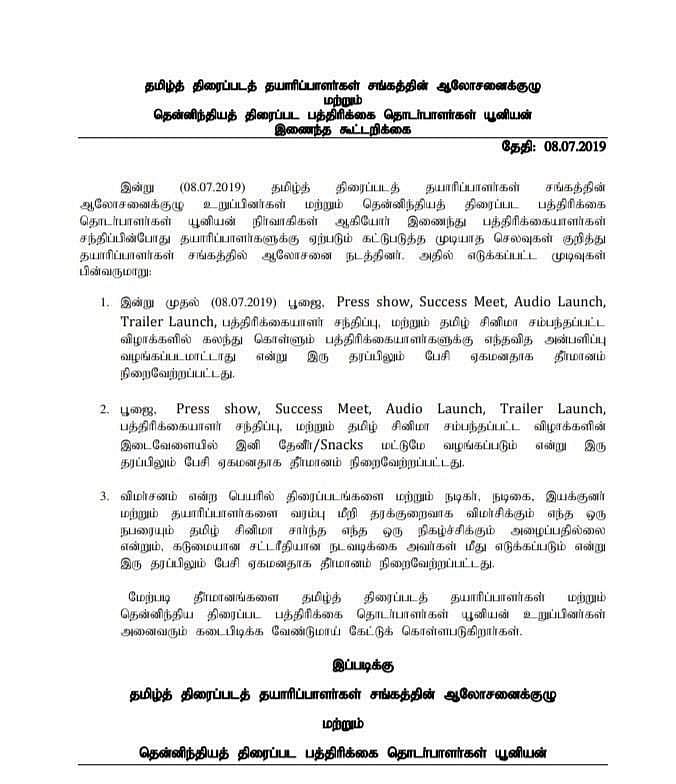 A popular PRO, on condition of anonymity, said that the decision has been taken only by a few members of the council. "All the producers have to agree to these conditions, in order for these to be formally implemented. I don't see this happening as there is a lot of difference of opinion." The PRO also feels that this decision will adversely affect small-budget films. "The new rules will have little bearing on star vehicles, as those films will get attention without extra promotion. In the case of smallers films though, we have to follow careful strategies to draw the attention of the media. Restricting us from using these will dramatically affect their result. Also, the money spent on such promotional events is quite insignificant when you compare it to the loss incurred due to piracy. I really wish they concentrated on bigger problems first," he added.