Arun Vijay, who seems to be on a signing spree, has started shooting for his crime thriller, Mafia, directed by Dhruvangal Pathinaru fame Karthick Naren.

The film's first look, featuring Arun Vijay in three different avatars, was released recently. While the actor wielded a gun in a couple of avatars, the third one had him donning a swimskin, along with a breathing apparatus.

While Prasanna plays the antagonist, Priya Bhavani Shankar has been roped in as the female lead in the film, which is produced by Lyca Productions.

Karthick says that the gangster drama will be entirely set in Chennai. "We're planning to wrap up the shoot in a single schedule of 35 days. All three principal actors will be doing roles that they have not done before," he says.

Interestingly, the film's title comes with the tagline Chapter 1, making it quite clear that Karthick intends to make a franchise out of this. 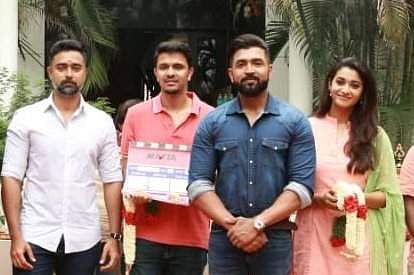 Jakes Bejoy, who composed the music for the director's first film, Dhuruvangal Pathinaaru, will be in charge of Mafia's music. Gokul Benoy, who got rave reviews for Monster, will be handling the cinematography.