Filmmakers Raj and DK: Certification is fine, censorship is not

Raj Nidimoru and Krishna DK, collectively known as Raj and DK, are basking in the success of their recently released production venture, Cinema Bandi, even as they are awaiting the release of the second season of their highly anticipated show, The Family Man. “I wish we had had the time to enjoy the lovely reception meted out to Cinema Bandi before The Family Man frenzy overtook. I think we will have to split the day into two, one to savour the film and the other, for the show,” jokes Raj.

Raj and DK, who made their debut with their self-financed film, Flavours (2003), cemented their foothold in Indian cinema brick-by-brick with quirky films like 99, Shor in the City, and Go Goa Gone before going on to empower younger filmmakers out to make their first films.

In this conversation, the filmmakers ponder on their struggles and how learnings have shaped their filmmaking journey.

From directors to producers

When Raj says, “We had only each other when we started out,” he means it literally. “At times, our crew had only three members: both of us, and an actor. I would hold the boom mic and DK would handle the camera and give cues to the actor,” recalls Raj. He adds, “We learned every craft in the filmmaking process—editing, sync sound, cinematography, graphic designing—all by ourselves, and these skills paid off while working on bigger films.”

This lack of guidance when they were starting off, has caused them to turn into guides for young filmmakers in search of leadership. “When we started out, we had countless questions about logistics and the creative side of filmmaking, but no one to guide us. We didn’t have anyone to help us write better scripts. We became our own teachers, and now, we try to help others too.”

Director Praveen and writer Vasanth of Cinema Bandi came to them with a completed draft of the script. “We then helped them sharpen it. During the shoot, I visited them for the first couple of days to make sure that the team was functioning fine, that everything was running on time, and that they were shooting as much footage as needed. We wanted them to avoid making our mistakes.”

Everyone is a filmmaker

The beautiful tagline of the Telugu film, Cinema Bandi, is, ‘Everyone is a filmmaker...at heart’. Raj explains, “When we quit our software career to pursue filmmaking, our friends and relatives questioned our decision, and we would simply say that everyone is a filmmaker and that we were just putting in extra effort to make a film. This same line from Cinema Bandi was our go-to mantra, and we have held on to it for all these years.”

The film follows Veerababu, an auto driver, who believes that making a film with a camera he stumbles upon, will improve the social and economic standards of his village. In a delightful sequence, the film crew uses Veera’s auto as a trolley, and a bullock cart doubles up as a crane. Raj laughs and shares, “While working on our first film, we were determined to conceive a dolly zoom shot (where the camera swiftly tracks forward or away from a character while zooming in or out) and we had no means to achieve it. So, we drove to a nearby supermarket and stole the shopping cart. We made a few adjustments to allow DK to sit inside with the camera, while I pushed the cart towards the actor. That was one of our jugaads.” 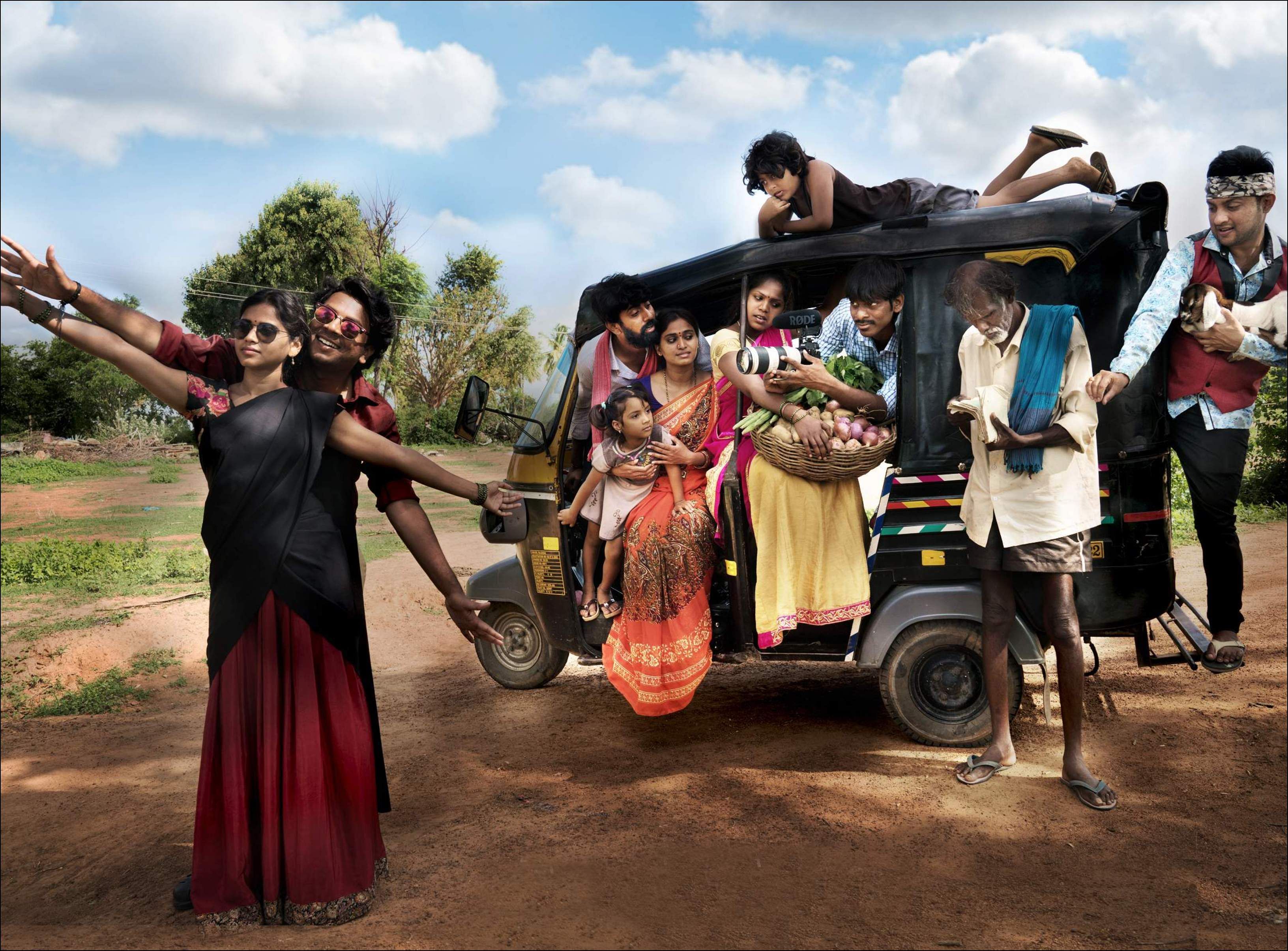 Today, it has become possible for inexperienced filmmakers to make their films, considering the wide availability of filmmaking tools. On the flip side, there is also increasing competition. Krishna DK says, “It was harder to make a film two decades ago, but yes, fewer people were making films. Now, anyone with a phone can make a film and it can go viral. For independent filmmakers, I believe that visual excellence isn’t all that matters. Regardless of how beautifully you frame a shot with an iPhone, someone with an Alexa camera will easily capture a better-looking shot. What truly matters for indie filmmakers is getting the basics of filmmaking right and showing utmost honesty in storytelling. You may be as skilled as Christopher Nolan, but you can make a film as big as his only when you get the kind of support he gets. So, right now, focus on the stories and be honest about the craft.”

What do they expect from a filmmaker’s pitch? “Two things,” Raj says. “Firstly, a script with a unique idea. We are not conventional producers who work simultaneously on a slate of many films and shows. All I need is a simple, unique idea. Secondly, a short film to assure us that you have a grip on the craft.”

The Return of Family Man

Released in 2019, the Raj & DK endeavour, The Family Man, was an instant hit and the anticipation for the second season is at an all-time high, despite the controversy surrounding its trailer. Did the success of the first season add extra weight on their shoulders? DK has a funny and interesting answer: “We were halfway through the shoot of The Family Man’s second season by the time the first one released. So, neither the appreciation nor the criticism has impacted the second season. The new chapter is its own entity.”

The trailer of the new season, which has raked in over 50 million views since its release, has stirred controversy in Tamil Nadu, with large sections taking offence to the perceived link between LTTE and ISI from the trailer. While the creators have remained tight-lipped about the condemnation, they addressed the uproar in a statement. “We are cognisant of Tamil people and the Tamil culture and have nothing but utmost love and respect towards them,” the statement read. They went on to request the viewers to “wait and watch the show when it releases,” assuring them, “you will appreciate it once you watch it.” With the government making more censorship demands of OTT content, do the producers deem it as having an adverse effect on storytelling or as an opportunity to get creative? DK says, “I have always believed that certification is good. When a show or film is made, it is good to warn the audience about sexual content, violence, drug abuse… and allow them to choose whether they want to watch it or not. Don’t censor it though. A minimal degree of censorship is fine when it’s absolutely necessary. When people raise their voice against censorship, it’s out of fear that the rules might be abused. If censorship is used to curb content that runs the risk of instigating perilous emotions, maybe it’s a good thing. But if it’s used to put everybody in their place and bully filmmakers, it’s not positive. We have to wait and see how the new regulations play out.”