'In cinema, a lot of efforts go unacknowledged'

Filmmakers Venu, Aashiq Abu, and Jay K talk about their anthology Aanum Pennum, working in the short story format, and their upcoming work

It's not every day that you see filmmakers from two different generations joining hands for a film. The makers behind the three films in the Malayalam anthology, Aanum Pennum -- Venu (cinematographer-director), Aashiq Abu (director), and Jay K (director) -- got together for a laidback interaction with us.

Venu: He did. Also, he was supposed to make the fourth film in Aanum Pennum. But by the time we finished shooting our films, the pandemic happened, and his film got delayed indefinitely. He held on to it for a while, but eventually, he dropped it.

Venu: Yes. Rajeev was supposed to shoot it in Sri Lanka because it was cheaper to do it there. It wouldn't have been feasible to do it here as it was a 16th-century tale. Rajeev had set up everything, but he wasn't able to go there for obvious reasons.

Aashiq Abu: The initial plan was to do four stories set in four different eras. Rajeevettan was supposed to do the first. Since it didn't happen, we decided to start it with Jay K's film, Savithri.

Venu: We shot everything in order. Savithri, Rachiyamma (directed by Venu), and then Aashiq's Rani. 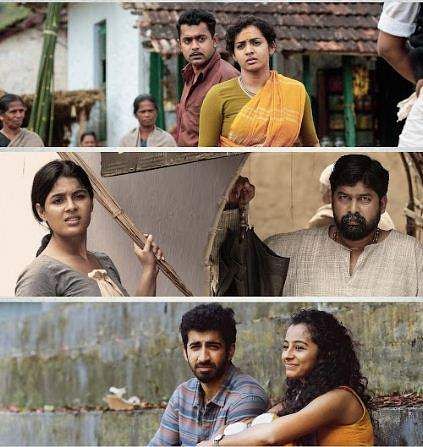 I felt Rachiyamma was a faithful adaptation, and Parvathy was perfect in the titular role. The film also cleared up some of the ambiguities in Uroob's original text. You made some interesting modifications to the screenplay.

Venu: That had to be done because it's two different mediums. Though it's possible to shoot the original story as it is, it's impossible to translate some things cinematically. What doesn't work in literature can be made to work in the film version. It has to be in the right places, though.

Were there any inputs from Parvathy?

Venu: Absolutely. I take inputs from all my actors. We did the film after discussing every aspect of the story. And the feedback comes from not just actors but also the crew members. We don't often credit crew members for their valuable contributions. In cinema, a lot of efforts go unacknowledged.

Aashiq, your film Rani feels like the third part in a trilogy that includes 22FK and Mayanadhi. I heard the original script of Unni R was much longer.

Aashiq: The screenplay was initially longer than necessary.  So we went with the short version. The short format gives it an edge that works in its favour. The prospect of conveying all the information in that particular timespan gave me a big high.

We see Roshan Mathew and Darshana Rajendran in a way we never saw them before.

Aashiq: They are actors with much integrity. They continue to practice and study acting even when they are not doing films. When they read the story, they understood the intricacies and explicit nature of it and were careful in their approach to the material. It also helped that they were great friends. It's a film that belongs primarily to its actors.

Venu: Did the actors, specifically Roshan and Darshana, say the exact lines in the script?

Aashiq: Yes. There were some minor changes, though.

Venu: Made by them?

Aashiq: Yes. They came up with some interesting variations, especially in the lengthy portions. I sensed that they were really adept at improvising.

Jay, your film is set against a political background. It also has elements of mythology and the nature of a grandmother's tale.

Jay: It was a story of Santhosh Echikkanam. He had narrated some real-life incidents like this. We also used Thoppil Bhasi's Olivile Ormakal as a reference. So Santhosh integrated all these influences to create an independent story. I was moved by the core idea: the survival of a female comrade.

How do you all feel about working in the short film format?

Venu: Well, I had done it once, during my final year in our institute. Although I studied cinematography, I had to direct two short films. We shot them with all the seriousness of making a feature film, with proper equipment, actors, and everything. The biggest advantage here is that the endurance for making a feature-length film is not needed. But first, one has to have a healthy relationship with collaborators. Each of us knew what the other was doing and helped out with different things. We used to communicate all the time. I found the whole process comfortable.

Aashiq: I did this purely out of creative interest. As in 5 Sundarikal, the idea was for a group of like-minded filmmakers to experiment with the short format. As far as I was concerned, I wanted to try a film that would work only in this format. Many edgy short stories that won't work as feature-length films can work like this.

What are you guys making next?

Aashiq: I just completed shooting Naradan (with Tovino Thomas and Anna Ben). Post-production is in progress. And we'll likely start Neela Velicham (with Prithviraj and Kunchacko Boban) by the end of this year. It would be an adaptation of Basheer's Bhargavi Nilayam screenplay (based on his short story Neela Velicham), set in that period itself. We are using the title of the short story, though. In Neela Velicham, colours and sound have great significance. But they couldn't do any of that in the original film because it was in black-and-white and the technology wasn't available. We aim to do something much closer in tone to Neela Velicham than Bhargavi Nilayam.

Jay: I'm currently doing the post-production of the Hindi remake of Ezra. I hope to start work on Grrr (with Kunchacko Boban) in September.

Venu: I have something ready too. I'm just waiting for the actors' dates to get sorted.