Suhasini Mani Ratnam, in a conversation with senior journalist Kaveree Bamzai, talks about her comeback to the director's chair, nepotism, and more

The lockdown has brought about a paradigm shift in the lives of millions. For Suhasini Mani Ratnam, the change seems to have been positive, with her returning to direction after 25 years for an Amazon Prime anthology titled Putham Pudhu Kaalai. Her short film is titled Coffee, Anyone?, a film that is co-written by husband Mani Ratnam. Suhasini is also joined by her cousins Anu Haasan and Shruti Haasan to act alongside her in this much-anticipated anthology, which is set to premiere on October 16.

In the latest edition of Time Pass, a series of webinars organised by The New Indian Express group, Suhasini sat down with senior journalist Kaveree Bamzai to discuss her upcoming film, family, and even politics.

“I wrote about six short stories during the lockdown, and when Amazon approached me. I pitched two of them, and one of them was Coffee, Anyone?” Suhasini says. As the film was made during the lockdown, the resources that were available were limited. “I roped in my father, Charuhasan, my cousin, Anu (Haasan), who lives across the street, and Shruti (Haasan), with whom I had developed a special bond through video calls during the lockdown. My father couldn't be part of the story due to an injury. I even had ideas to rope in my uncle Kamal Haasan but decided against it.” 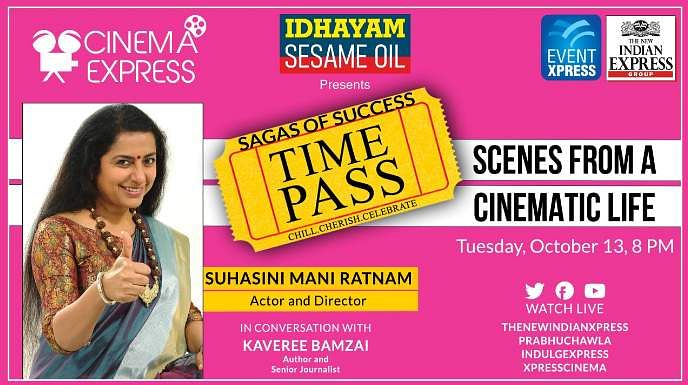 When asked about the nepotism accusation against familial collaborations, Suhasini says she doesn't know why it is happening. "I can't change the fact that I am Charuhasan's daughter and Kamal's niece. I think there is more pressure on us... even more on the next generation like Shruti, Akshara, and my son. But the problem is not in the South yet... that pandemic has not reached us yet."

Suhasini notes with satisfaction that films across languages have become better. “It started with Hindi cinema when people like Farhan Akhtar stepped in. In Tamil cinema, amazing filmmakers like Vetri Maaran, Bala, Selvaraghavan and Karthik Subbaraj came in. But I would say now that Malayalam films are now better than ours."

The actor-director also touched upon the status of Mani Ratnam's upcoming magnum opus, Ponniyin Selvan, revealing that the director has finished work on about 30 percent of the film. “The remaining work can be done only when the situation gets better. There is permission to shoot with 150 people now, but Mani needs at least 500 people to shoot the rest of the film with.”