Shruti Haasan: Casting agents didn't know how to cast me

The actor-singer talks about turning 30, reassessing her career, dabbling in music, and her experiences with anxiety

Shruti Haasan, whose last releases were Singam 3 (Tamil) and Behen Hogi Teri (Hindi) in 2017, has since focussed on her musical career, performing in multiple musical shows in London and released several independent songs. The actor said this was a conscious shift. "I have found it really difficult to find my space in acting. In the beginning, I went the commercial way, and even though I enjoyed that phase, I was starting to get disillusioned. So, I decided to take a step back, and reassess," said Shruti, in a chat arranged as part of Indulge Time Pass, a series of webinars organised by The New Indian Express group, and hosted by senior journalist Kaveree Bamzai.


Shruti delved in detail about her cinema experiences. "As an actress, I have been kind of a misfit. Nothing about me, say my facial features or my demeanour, made it easier. After a while, casting agents didn't know how to cast me. But once I came to terms with that, it has been a great learning experience. In fact, I like being this indescribable and non-geographical person. While I trained formally in music, I had so such training in the acting department. And so, I think I didn't have the tools to help me come to a decision quicker. But what I love about my acting career is that I have learnt and improved in front of a million people." 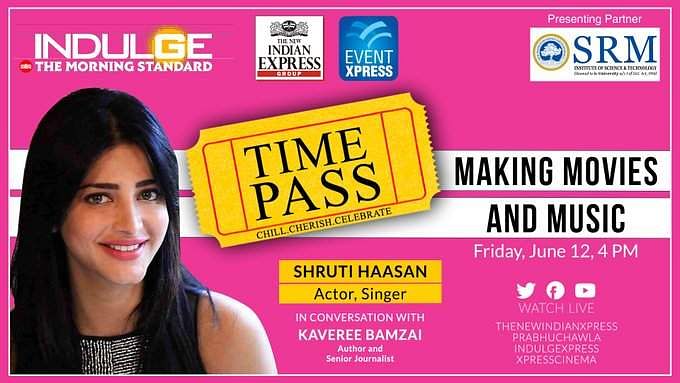 On her roles in the upcoming films, Laabam (Tamil) with Vijay Sethupathi and Krack (Telugu) with Ravi Teja, Shruti Haasan shared, "Yes, they are again commercial. But with these films, I have found voices that are not just caricatures of women, but also have a tonality that is relatable to my personality. To be honest, it's a great time to be an actor, especially in this multicultural environment, where it becomes impossible to guess someone's origin from their face."

Shruti shared that she is overwhelmed by all the adulation she has got as an actor. "As artistes, we work for the sound of cheer. It's not a 'drug' you can go and buy. It has to be earned. Recently, the Telugu film, Srimanthudu, brought me so much love."


Shruti added that she has been doing lots of gigs and performances in London over the last couple of years. "I don't want to do Bollywood music only because I am from here. I am interested in giving Western music a smart Indian twist--the Indianness being the tadka, not the dal itself."

The actor also opened up about her struggles with anxiety. "I was trying to live somebody else's version of myself. It wasn't me. Soon, I realised that it's not about avoiding anxiety but to let it pass through you. The whole thing happens to be a journey of compassion towards yourself. Once I saw it, I never looked back. I guess turning 30 has been been the best thing that has happened in my life," she said.