Mahima Nambiar: I played the female version of Santhakumar in Magamuni

The actor played the unconventional journalist in the recent Arya-starrer, Magamuni,  talks about her initial hesitations to take up the role, the overwhelming response and her approach to cienma

The portrayal of journalists in cinema has mostly been debatable. They are either those who sport nerdy glasses or those with a fake accent. Mahima Nambiar's Deepa in Magamuni, however, was far from such cliches. "Even I expected to wear only floral kurtis and jeans when I was asked to play the role of a jounalist,” says Mahima. Santhakumar, however, showed her the sample sketch of her look in the film. “I was initially hesitant to carry the tanned look, as people have been telling me that I might not be considered a commercially-viable heroine if the role failed to get the right recognition.” She was sold on the unorthodox characterisation of Deepa, and didn't want to let go of the oppourtunity once she heard the complete narration. “I was excited to come out of stereotypes. I wanted to do this role, even if my screen space is limited. After hearing all the compliments since the film’s release, I am happy I was firm in my decision to do the film.”

The character marks quite a transformation from your girl-next-door roles. How did you get into the skin of the character?

I had inhibitions before shooting. I must have told Sathakumar sir a hundred times that he should go with another heroine. But he kept motivating me. Deepa's character is like a female version of him, and the crew in fact started calling me Santakumari on the sets. Even the look of the character is designed after him. My character has a weird sense of fashion and wears hoodies and sweaters in summer. All her clothes are mismatched from accessories to footwear. I even tried to mirror his body language. Santhakumar is the coolest person I have met in my life. I want him to make more movies without taking such long breaks.

How much of Deepa are you in real life?

Deep is a headstrong girl, who is happy in her own way.  I don't think I am that bold. I am a person who cannot say no to anybody. I'm carefree and messy. Even the people at my home keep telling me that I should walk and sit gracefully like a girl. Deepa has this zig-zag way of walking; that's how I am in real life. I don't even worry a lot about looking good or maintaining my body. I hate dressing up and I hate makeup. I do all this as it's part of the profession and I have to look good to the audience. Transforming into her wasn't a great challenge. You could say Deepa is a mixture of Santhakumar and Mahima.

The relationship you share with Arya's Muni Raj is quite intriguing.

It would have been a usual film if we had had a love angle between them. Both Deepa and Muni are just curious about each other and it's a rather platonic relationship. Usually, heroines get a cliched happy ending when they join hands with the hero, but the end of Magamuni was poetic. In fact, the toughest part of playing Deepa was refraining from looking at the lead romantically, as I had got so used to that over the years. (laughs) 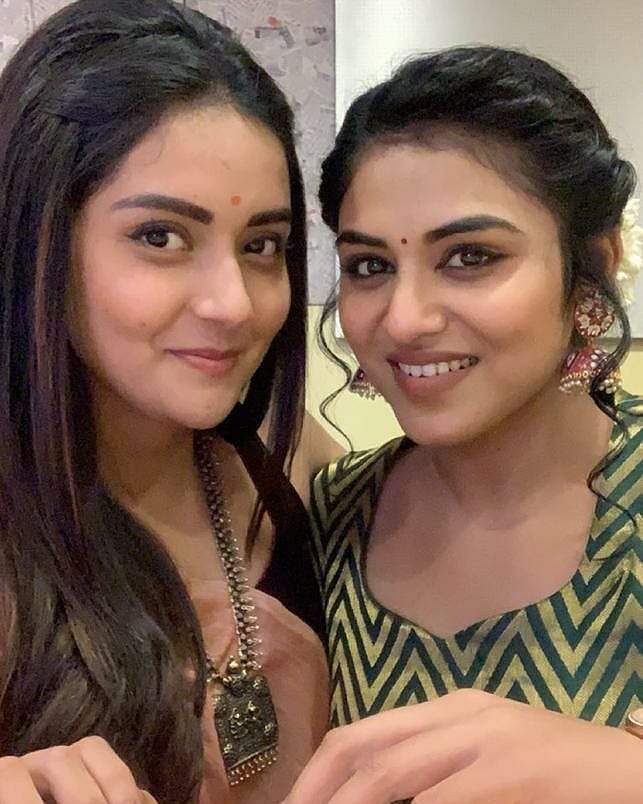 Many think that Indhuja and I were friends even before Magamuni, as we have been sharing warm words about each other on social media. But we met for the first time only during the promotions of the film. Even before I met her, I had heard a lot of good things about her from the crew members. We have formed a magical bond and are genuinely happy for each other's growth.

A section of the audience feel that your character didn't have a closure and the climax was a bit rushed.

Santhakumar sir didn't alter the climax or my character. What you see on screen is how he had conceived it from the beginning. Some told me that my character didn't have a proper ending. Not all women want to get married; a lot of them choose to be like Deepa.

We had thought of a slightly tweaked version of climax where a picture of mine in an aged getup hanging in the school gets shown during the final narration. But later, we felt it was unnecessary and stuck with the swimming shot of Muni.

You mentioned having some fears over how your image would be perceived after this film. What image would you like to have?

I love it when people refer to me by my character's name. I consider it to be the biggest award and recognition for an actor. Even after seven years of Saattai, a lot of people still call me Arivazhagi. Many people don't even know that I'm not Tamizh. I'm happy I'm being considered one. This motivates me to work harder on learning the language. Now, I can read and write the language with ease; I even dubbed for my role in  Magamuni.

A bunch of fans on Twitter demanded a separate spin-off with Deepa's character.

Many people said that they didn't get to see enough of Deepa in Magamuni and would love to see her in a spinoff. I am totally game for it.