Why Vivek's Kannadasan is the real Dharala Prabhu

Sudhir Srinivasan compares Vivekh's Kannadasan in Dharala Prabhu to the Hindu sage Narada in this column. He writes, "A wise sage, he is shown always to have a sense of humour. He’s single too..."

Kannadasan, Vivek’s character in Dharala Prabhu, is a unique person. He’s a fascinating man, so unusual in his capacity for self-admonition, in his willingness to prioritise other people over self. Our introduction to him is as a doctor, a relentless businessman, who’s willing to suffer humiliation, if it means a regular supply of work. It’s almost tempting to eye him with wariness, to dislike him even, given that we are encouraged to form an emotional alliance with the protagonist, Prabhu—who Kannadasan is almost shown to take advantage of. Slowly though, you see the doctor for who he really is. He’s a businessman, but one who has boundless patience to hear the requirements of his customers. He knows this isn’t business for them; it’s their whole life. His is a rundown place almost, and his job can get quite stressful, and yet, you never see him lose his sense of humour. A patient, leaving his clinic, even observes once that one of his jokes was a tad unpleasant, and wonders if Kannadasan’s practice is reliable. The truth is, he needn’t have worried. The film may seem to suggest that Kannadasan has got his share of flaws, but really, he is as virtuous as they come. He’s an ascetic. His introduction scene is as he’s praying to an all-star cast of Hindu deities. That’s not the only reason I want to draw some parallels with Hindu mythology, in talking about Kannadasan. In Hinduism, the destruction of one’s ego is an all-important quest, and I’d argue that Dharala Prabhu’s Kannadasan is a rare non-egotistical character in our cinema. This is why you barely see him take himself too seriously. This is why the characters in Dharala Prabhu get away with unleashing some vicious verbal attacks on him. Prabhu constantly dismisses him as a fraud. Prabhu’s mother accuses him of being a con-artist. Prabhu’s wife throws a cold stare at Kannadasan towards the end, that seems to pack in a thousand insults. Even Kannadasan thinks of himself as a ‘kevalamaanavan’, which finds a quick response from his assistant: “Correct sir.” Anger is a consequence of ego, and is it any wonder then that we hardly see Kannadasan lose his temper? The only time he comes close is when Prabhu humiliates him for relentless pursuit, but even then, observe Kannadasan’s choice of words: “Un value unakke therla.” Even in that moment of personal humiliation, the doctor expresses concern towards Prabhu. This happens on another occasion too, when Prabhu’s mother calls Kannadasan names over a phone call. After the call, the sage that he is, he isn’t busy licking his wounds. Instead, he’s expressing empathy for her, and wondering how much she must have suffered in order to have become so angry with him. He is a person almost beyond the selfishness of the mortal world.

Even as a businessman, you can see that he’s relentless in his quest to bring joy to his customers. In fact, it’s his desire to help them that triggers the whole circus of events in this film. He thrives in rounding off the lives of couples, unhappy with their inability to have a child. Even here, you can see his lack of ego, for Kannadasan himself isn’t married, let alone have a child. Not once though do you catch him with a forlorn look of ‘what could have been’. He is secure in his choices. In a passing, almost funny moment, he lets out that he isn’t married, never was. Given his general mischievous nature though, it’s hard to take his reasons too seriously. You wonder if there’s more than he’s letting out. In a sense, he’s almost like a mythical, and I say this again, sage, who lets out information about himself at a premium.

If you are wondering about his apparent lust for money, ask yourself if this is really the case. He brings in Prabhu to further his business, sure, but as you see through the film, despite there being plenty of opportunities to make away with a lot of money, he does not. His assistant, right at the beginning of the film, admits that he misjudged Kannadasan as a swindler. Despite Prabhu’s refusal to accept money, Kannadasan makes secret investments in his name, and constantly urges him to take it. If these materialistic arguments don’t convince you of this man’s inherent kindness and empathy, look no further than the end of this film when he’s trying to convince Prabhu’s wife to forgive her husband. I doubt I have seen a recent film in which a person, looking to persuade another, accepts that the opponent’s existing point of view could well be correct too.  Kannadasan says that their perspectives—from the different vantage positions of a doctor and a wife—are conflicting, but are nevertheless equally valid. He then gently nudges her to see things from his point of view in this beautifully written scene. 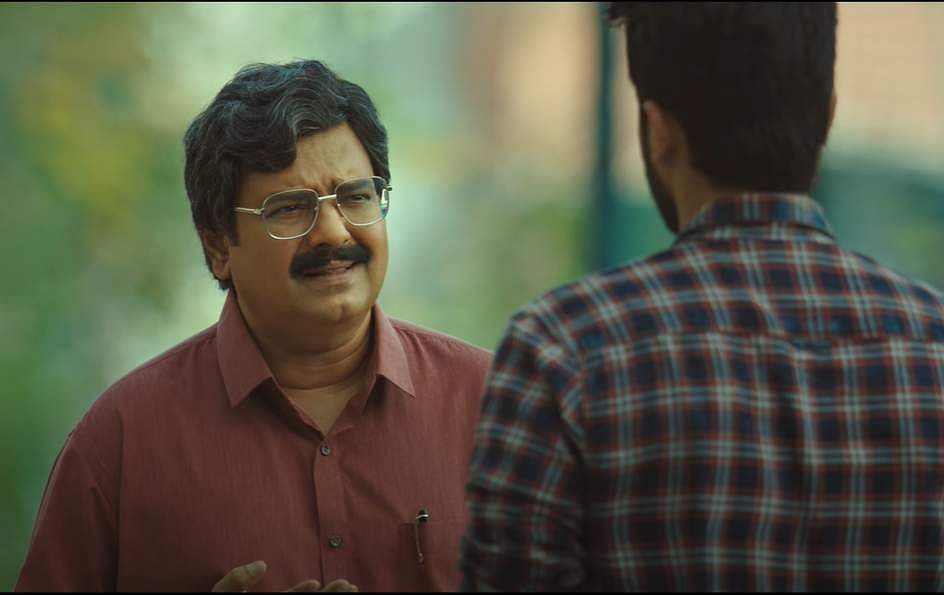 I could go on, but suffice to say that one song written by his namesake, that plays in the background, makes a fitting judgment about his character: “Ullathil nalla ullam, urangaadhenbadhu…” This, of course, is another connection to Hindu mythology (written as it was for a film about another character known for his kindness—Karna). This song, of course, comes at a time when Kannadasan is literally sleepless. To extend this comparison a bit further, if I had to think of a character in Hindu mythology that’s closest to Kannadasan in this film, I’d have to say, Narada. A wise sage, he is shown always to have a sense of humour. He’s single too, and while his plans always tended to cause chaos, they ended with the good people benefitting. All of this applies to Kannadasan, of course, and like Narada Muni, Kannadasan makes himself an uninvited guest every time he thinks the situation needs his intervention. How curious then that in this same film, Kannadasan, in trying to convince Prabhu, should also share an anecdote from Hindu mythology about how childless couples sought the help of sages to bear children… He’s a sage among humans, a selfless being among the selfish. As I began saying in this piece, he’s quite unique.

What Tamil film are you most excited to see in 2023?