View Finder: Death and resurrection in the greatest 15 minutes of Selvaraghavan

A recent Film Companion opinion piece that ranked 7G Rainbow Colony as the best Selvaraghavan film, got people pouring in with their own respective reordering of the auteur’s films. Some placed Pudupettai at the top, a few even suggested Aayirathil Oruvan, one or two even tentatively offered Mayakkam Enna... All this got me thinking of what I believe are the greatest 15 minutes of any film he has made so far. I’m referring to 7G Rainbow Colony’s end stretch, of course; a stretch, which, without warning, explodes with new-found, irrepressible pathos. In talking to us, Ilaiyaraaja recently attributed the longevity of any art to the presence of a seemingly obscure factor he referred to as “uyirottam”. Life and truth in their most unadulterated form sometimes pervade into art, and it can be said that the last 15 minutes of 7G Rainbow Colony is well and truly above the rest of the film for the gut-wrenching depths it introduces to us.

If you remember, it’s a film in which the woman, Anita, tolerates quite a bit. Kathir is ill-mannered and brutish, a quintessential Selvaraghavan central male character if you will. This one also ogles, misbehaves, abuses, stalks… He is pathetic. And she can’t seem to fend him off. Instead, like a germ, he ends up growing on her. He’s almost an infection, a flaw. He’s… human. She’s an epitome of patience, a giver. She’s… an angel, a goddess. He’s a sinner; she’s his saviour. He’s a mortal; she’s his immortal. He needs redemption; and she’s the redeemer, his — allow me to go with this — Christ. All of this subtext becomes more and more apparent in those last 15 minutes, an unflinching take on grief, loss, and love. Kathir falls into the abyss of loss and experiences the profundity of grief. He then transforms and experiences the apex of rapture. Sin, saviour, redemption, Christ, angel, immortal, rapture… There’s a lot of religious colour clearly. Allow me to delve into those 15 minutes, and you will see why.

The harrowing fifteen minutes begins at around the 2 hours 45-minute mark in the film. It’s the morning after the first intimate night between Kathir and Anita. He thought their encounter was a final decisive admission of her intention to marry him. She feels she’s gifted him her body, a mortal offering to a man who’s generally been about the flesh. This sinning man with his quick temper, childish tantrums, unrestrained profanity, uncultured behaviour… And yet, he has persevered, like a sinning devotee to a deity. And almost like in mythology, she has rewarded him with a boon: Physical intimacy. “Nee sandhoshama irukkanumnu unakku enna kuduthen.” She then suggests she is moving on, perhaps even letting out that she’s ready to grant the next boon — marriage — but this time to her parents. This is perhaps her first death in Kathir’s eyes, and his reaction is as expected: “Nee illanaa, naan sethruven.” He makes this threat at least twice. But of course, for cinematic purposes, it isn’t enough for Anita to die a metaphorical death in his life; this almost heavenly being has suffered romance with a mortal, and is cursed to death, in a sense. She meets with an accident, as she stands eyes full of longing and regret and love, intending to return to Kathir. Tyres maim her, and one vehicle even runs over her face. This is what happens to angels on earth. Just before all this mayhem occurs, we get at least two clear shots of a statue behind them, which further substantiate how she’s his redeemer, a guardian angel. The statue is a version of Michelangelo’s Pieta — mother Mary holding her beloved son, Jesus, in her arms, after his crucifixion. The statue is a shadow of what is to come. Kathir is about to be destroyed, and Anita will have to protect him, resurrect him. 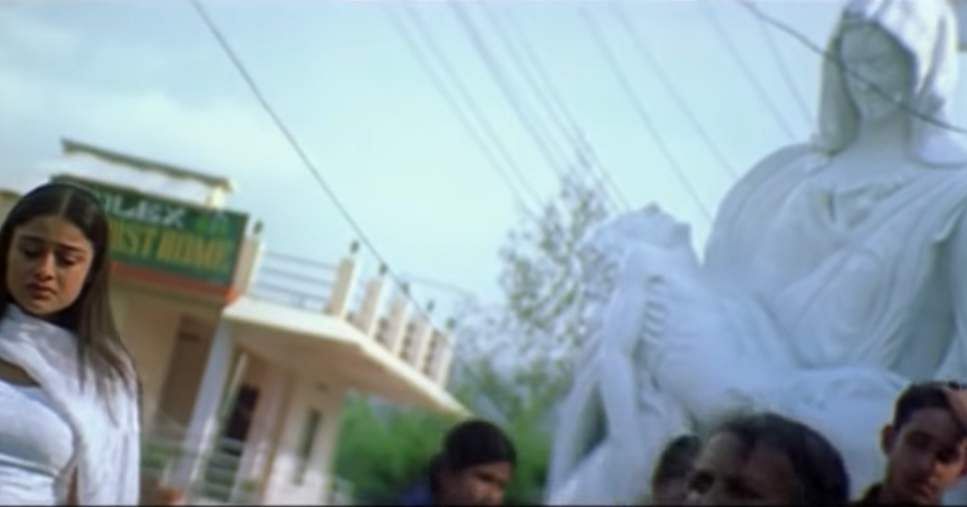 We next see a flawless Anita walk by his side as he’s taken into a hospital on a stretcher, and as the scene fades out, you see on his face how much her presence means to him. We again see her standing by him, when he opens his eyes. And that’s when she decides to leave. “Anita?” he calls, a heart full of longing. But her job is done. She has already passed on, but had to stick around to save him from death. It’s ultimate selflessness; she’s rescuing him even after her own death. He wakes up again, but as one half of a whole, he feels instinctively that something is wrong. His friends try to calm him down because they know the truth, and they know it’s a hammer blow to his heart. Yuvan Shankar Raja, whose music soars and melts and hurts in this film, uses silence here. Eerie silence engulfs the scene, as the cold smell of death wafts in. And that’s when wails break out in the background. It’s terrific writing. Kathir’s heart skips a beat, as does yours, and then his worst fears come true when he hears someone scream, “Anita!” You, the audience, know it has been coming, but it’s shocking nevertheless. It’s Selvaraghavan unflinchingly looking directly into the eye of loss, into death. 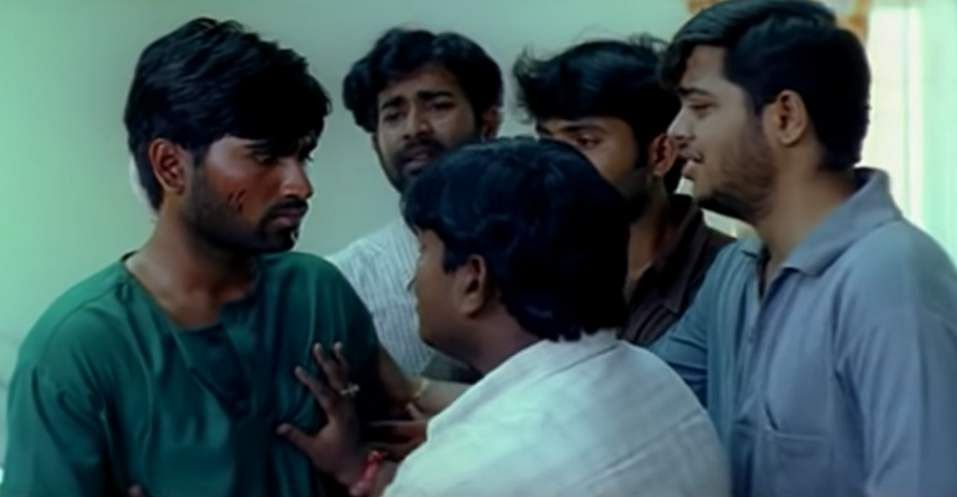 If you thought the morbidity was over, Selvaraghavan shows he’s just warming up. I don’t believe I have seen another Tamil filmmaker delve almost masochistically into as much darkness with his writing. Kathir stumbles with his friends into the mortuary, an icy, blue space, almost from another world. Its unkind attender seems like a strange guardian of the dead, and demands an offering: “Ambadhu rooba aagum, sir.” Kathir goes berserk, looking for Anita’s body. The attender, with more unkindness, says, “Spot laye out sir. Moonji laam edhuvum illa.” A sight of the whole body may not have affected him as much, but Kathir gets destroyed by the sight of her finger with that ‘Aum’ ring. Her neatly manicured fingers is a sign she was very recently alive. As he totters in the hallway, we see a shot of the protagonist shaking in slow motion, an idea we have seen in several Selvaraghavan films including in Pudhupettai and recently, NGK.

And it still doesn’t end. Anita’s parents confront him, the dad more so than the mother who’s lost all life energy, it seems. And yet, it’s a family that takes pride in chastity, honour, and that sort of thing. The policeman who talks to him is, much like the mortuary attender, an unkind man. He doesn’t flinch from using words like ‘paduthurpaa’. That’s when Kathir himself gets a vision of Anita’s mum as a corpse. Even in that broken state, this man realises what would happen to that family if he said the truth. He lies about kidnapping her, and saves her honour, and as an extension, the family’s. Their family is heartbroken, but their respect for their goddess is reinstated. He roughs Kathir up after revealing what we knew all along about Anita — “Ava enga kadavul sir” (hint: she’s Kathir’s too). He also lets it slip who Kathir is — a sinner, when he says, “Indha paavi konnutaan.” But the mother understands it all. In almost a spiritual scene, as she walks away in grief, Kathir gets his first redemption: Forgiveness from Anita’s mother, as she, almost like in a temple, places her palm on his head in a sign of blessing and gratitude. Remember that this is a woman who hated the very sight of him, but now, in the face of this tragedy, on account of shared grief, can relate to him. What class and caste opposed, grief enables. This is also why she won’t register a police complaint; she knows her daughter is dead, but more relevantly, she knows Kathir, for all practical purposes, is dead too. 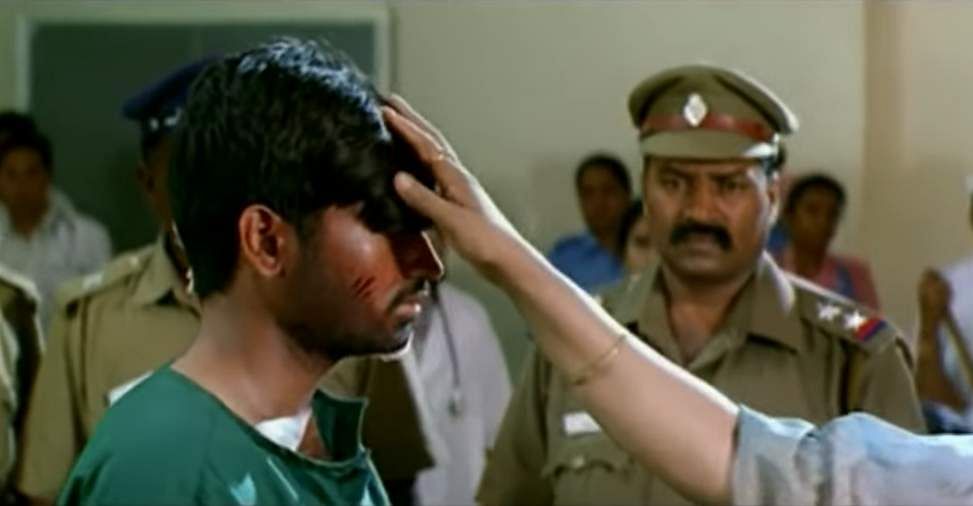 Kathir is a walking corpse. It is then that Selvaraghavan slips in the absolutely gutwrenching Ninaithu Ninaithu, a mourning - a dwelling on the misery of living on memories. Selvaraghavan won’t let up on the harshness of reality. He shows the body descending into an electric crematorium and even shows it burning. And then perhaps comes the most affecting visual of all, when Anita’s family disposes of her mattress and pillow. Kathir, who lingers around, like a dog missing its dead owner, steals it from the garbage pile and runs home. It’s also an evocative callback to a scene at the beginning when he picks up her dupatta from the terrace and sleeps with it. It’s the sort of insanity, the sort of privacy invasion, this sinner indulges in. It’s the sort of disturbing imagery this director indulges in. 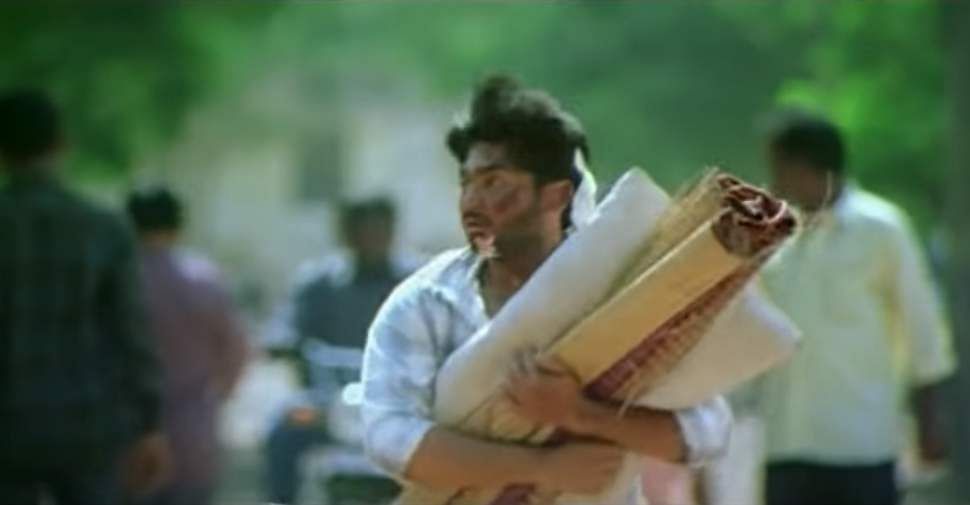 Kathir then wants to be done with the horrendous business of living. He jumps from a flyover. He jumps in front of several vehicles. This man, who got so easily run over just days ago, just can’t catch a ‘break’. He jumps in front of a lorry, but it misses him too, almost miraculously. And that’s really the key word: Miracle. He’s being protected by his guardian angel who’s no more in mortal form. As he’s getting beaten to a pulp, who should come to rescue him but a group of nuns. He meets Anita again, and this time, she performs another miracle. She picks up all the memories that tormented him — in Ninaithu Ninaithu — and transforms him to see the beauty in them. Tragedy to joy. Water to wine.  As she walks away, she picks up an umbrella. She’s a goddess, remember a spirit from another world, and she knows before it rains that it will. Finally, Kathir gets resurrected, but of course, it is at a cost. He can never live as the world expects him to. He will walk into work, fully drenched; he will talk to an imaginary person; he will sit alone at park benches waiting for a dead person… but he is alive and otherwise, well-functioning. At the beginning of the film, he’s even shown humming a song as he’s taking bath. She may be dead, but in his eyes, with all the memories he has of her, she isn’t. Don’t all the people we have loved continue to live on as memories, as images in our head? 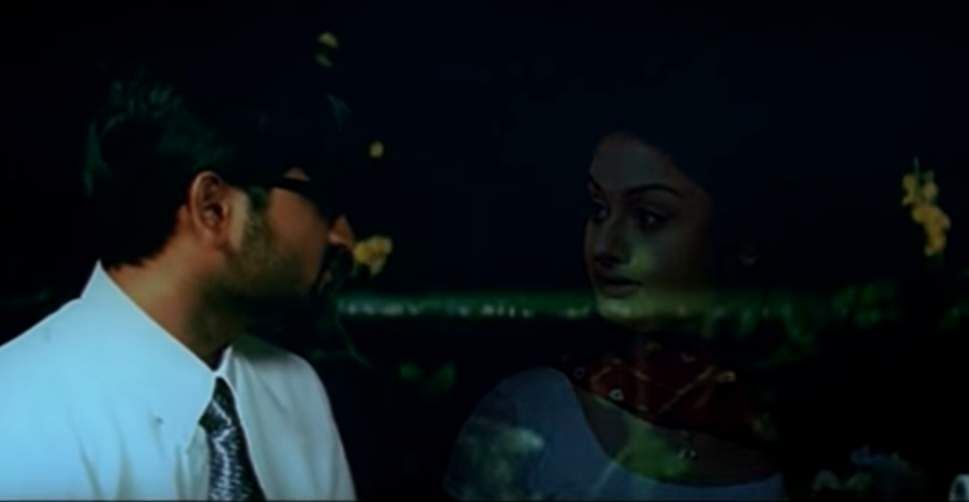 I don’t believe there’s been another film that has sunk its teeth into death and loss as 7G Rainbow Colony did in those extraordinary last 15 minutes. Whatever be the film’s general problems, for me, there’s no doubt that those minutes, unafraid in its depiction of torment, unrelenting in its exploration of damage, are the best we have seen of Selvaraghavan.