Sivakarthikeyan-Nelson Dilipkumar's Doctor, which was gearing up for a March 26 release, has now been postponed to accommodate the upcoming elections in Tamil Nadu.

In a statement on social media, KJR Studios, the makers of Doctor, said, "We were excited about bringing you the film on 26th of March, 2021. Owing to the elections, we will be postponing the release to a later, more suitable date. We're taking this call keeping the best interests of our film, the upcoming elections and most importantly, the fans in mind.We are discussing a better release date with all the core members of the project and will announce it in a few days' time. Until then, we request you to keep up the positivity and support you have showed Doctor from Day 1." 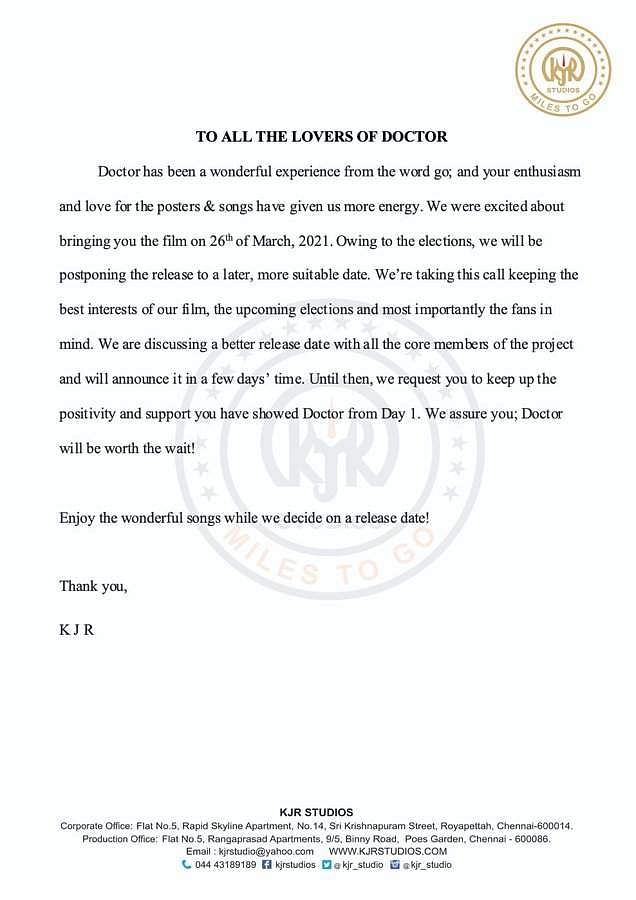 The film has music by Anirudh Ravichander and cinematography by Vijay Karthik Kannan (Aadai).

This is Nelson Dilipkumar’s second film after the Nayanthara-starrer Kolamaavu Kokila. Nelson will next helm Vijay's Thalapathy 65, which is produced by Sun Pictures.

Sivakarthikeyan, on the other hand, has the sci-fi film Ayalaan, directed by R Ravikumar (of Indru Netru Naalai fame), in the pipeline. He has also signed Don, which will be directed by debutant Cibi Chakaravarthi.