Micro-blogging site Twitter took down some tweets of Kangana Ranaut citing violation of the platform's rules on hate speech.

Kangana has been vocal about her views against the ongoing farmers' protest and her tweets have created a stir on social media. Her heated spat with Dilijit Dosanjh over the farmers' protests also grabbed a lot of attention.

Yesterday, the actor lashed out at International pop star Rihanna for extending her support to the farmers' protest in India. In a tweet, Kangana called Rihanna a 'fool', claiming that the protesting farmers were terrorists.

Social media users have been circulating a screenshot of one of the deleted tweets, in which she can be seen criticizing cricketers who were tweeting about the farmers' protest while responding to a tweet by Rohit Sharma. In the tweet, she terms the protesting farmers as terrorists - something that the actor has been doing since the start of the protests. 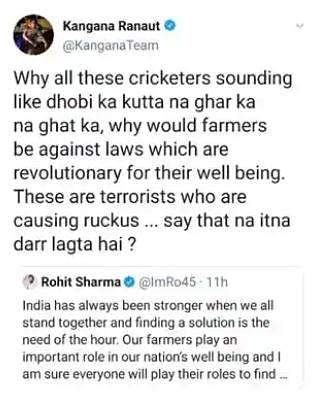 Twitter, in a statement about the deletion of tweets, has said, “We have taken action on tweets that were in violation of the Twitter rules in line with our range of enforcement options.”