Brahmastra: Part One is set to release in five languages — Hindi, Tamil, Telugu, Kannada and Malayalam — on December 4

Amitabh Bachchan has wrapped up shooting for his portions in Ayan Mukerji's Ranbir Kapoor-Alia Bhatt-starrer Brahmastra.

The legendary actor took to his blog to share photographs from the sets of the film, which also stars Nagarjuna and Mouni Roy in pivotal roles.

"So they tell me its a 'film wrap' for me on Brahmastra. And, as is the norm the unit applauds and everyone embraces and the good-byes are done. At times they set off some confetti guns... its the done thing they say... really? Sounds more like 'thank God, good riddance'. Good riddance of the actor... had enough of him," Amitabh wrote.

The megastar also shared a photograph of Ranbir gifting the thespian headphones. The 77-year-old star shared on Twitter that Ranbir taught him and set up the sound earplugs.

"Good riddance of the wires and cables," he wrote. 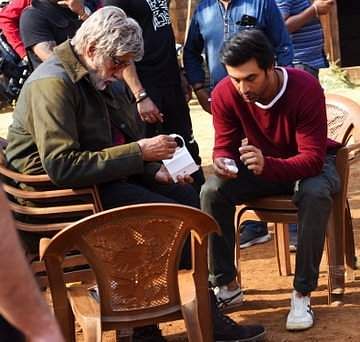 Meanwhile, on Instagram, Amitabh shared a photograph of Alia and captioned it: "She breezed in... did her shot... a huddle and out. The effervescent, supremely talented, scintillating Alia."

Brahmastra: Part One is set to release in five languages — Hindi, Tamil, Telugu, Kannada and Malayalam — on December 4.