From searching for the best voice to dub his portions to abandoning songs and planning to use graphics, directors of Chiranjeevi Sarja’s under-production films look at keeping his memories alive

Sandalwood and fans bid goodbye to actor Chiranjeevi Sarja, who passed away on June 7 due to a massive cardiac arrest. The actor, who started his film career in 2009 with Vaayuputra, had 22 releases in a decade. Over the last few years, Chiru had become one of the busiest actors in the industry and was simultaneously juggling two to three films.

The hero of films such as Chandralekha and Whistle had three back-to-back releases in 2020, including Khaki, Aadya, and Shivarjuna. He had three more projects lined up for release, which are all in different stages of post-production. The actor was gearing up to start shooting for a handful of projects, including Satya Rayala’s April, and a commercial entertainer with Iruvudellava Bittu director Kantharaj Kanalli. He had also agreed to a couple of more films.

While the makers of Shivarjuna, directed by Shiva Tejas, which was released a day before the lockdown, plan a re-release, Cinema Express checks on the status of the three projects that will be the last films in the actor’s career.

Ranam, which brings together actors Chetan and Chiranjeevi Sarja, features the latter in the role of an encounter specialist. The film, directed by Samudra and made under the banner of RS Productions, is ready for release. Producer R Srinivas is ready with the first copy and is planning to bring it on to the big screen when the theatres are allowed to open. The film is made in two languages — Kannada and Telugu. It has music composed by Gurukiran and cinematography by Niranjan Babu.

Almost the entire shooting of Rajamarthanda, which is directed by lyricist-turned-director Ram Narayan, is complete, and the team was left with only the filming of a duet song sequence and the dubbing.

“The lockdown did not let us complete the film in time, and Chiranjeevi had plans to start dubbing sometime this month. He had called me a few days ago to discuss about it. We had planned to shoot one duet song at a foreign location, but that could not take place,” says Ram Narayan.

The director is now planning to go without the song, while he is discussing with the producer about how to go about dubbing, and who can suit his voice.

“He was very keen to dub for this film, because a few scenes had him narrate lengthy dialogues, which would go up to two pages. This was unlike his two-line punchy dialogues. Secondly, the dialogues were in Halegannada (old Kannada) language. Since a few of these scenes were filmed in public, he used to rehearse the dialogues before taking the shots. We were ready to head to the recording studio, but he insisted upon resuming once the film industry gets back to normal,” says Ram Narayan.

According to the director, Rajamarthanda will probably be the last film to feature Chiranjeevi as a full-fledged hero.

“Ranam has him sharing screen space with another actor, while only 70 per cent of Kshatriya has been shot. So ours will be the film, which will show him in a full-fledged role,” says the director, who adds that he interacted with the actor about this project for three years.

“Since he had two shades for the film, he wanted to take time and do the role. I am glad that Chiru and his wife had watched the film, along with the producer and music director. We hope to release the film this year,” he says.

Rajamarthanda, produced by Shivakumar, features Deepti Sati as the female lead, and has Devaraj, Chikkanna, Bhajarangi Loki, Triveni, and Megha Shree in the cast. 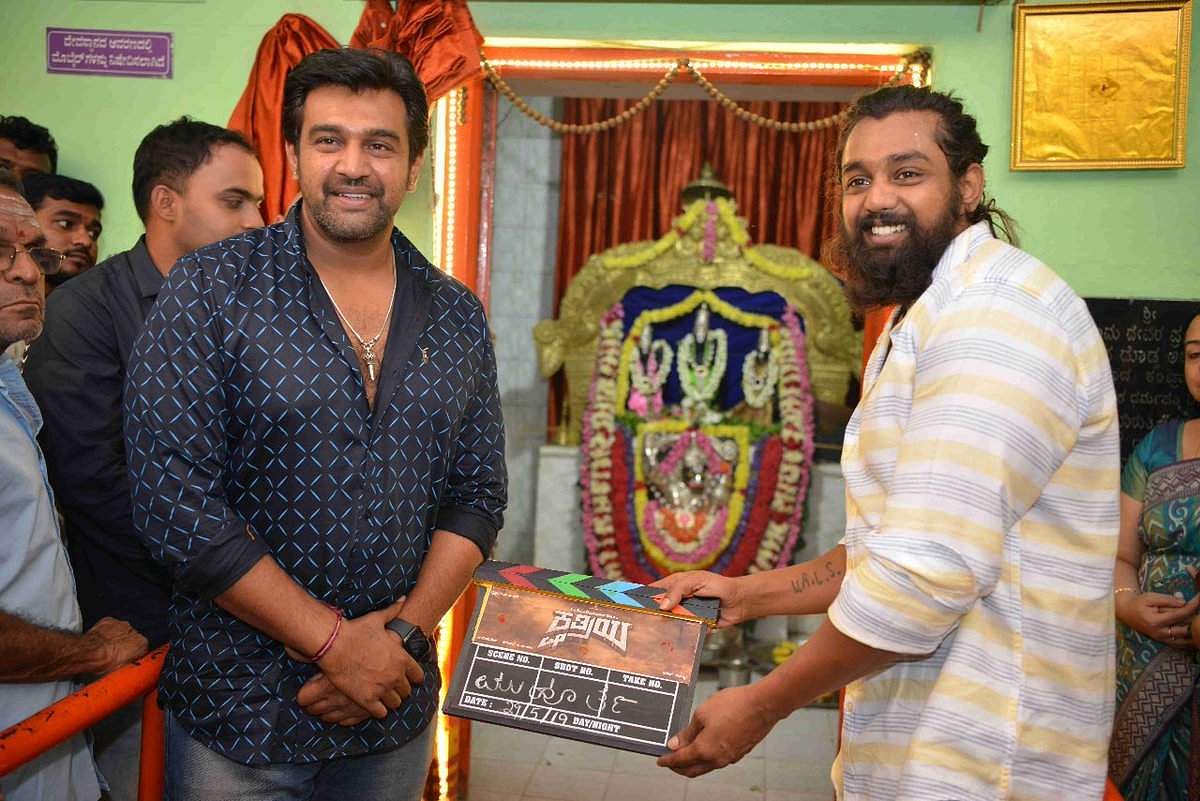 Kshatriya, which marks the directorial debut of Anil Mandya, was 70 per cent complete. The team has about four days of shooting left for the talkie portions and then a couple of songs.

“We are done with 70 per cent of the shoot, which will be processed, and the rest will be planned when I sit with the producer in the coming days,” says the director, who is looking to fill in the rest of the portions and songs with the help of graphics.

“If not for the coronavirus outbreak, we would have completed the shoot,” he says, adding that he will take a call after discussing the project with Chiranjeevi Sarja’s brother, Dhruva Sarja.

Kshatriya features Sanjana Anand as the heroine, along with Sudharani and Sadhu Kokila playing prominent roles.