Deepika Padukone has shared her first-look from Kabir Khan’s ‘83. The actor has a cameo appearance in the film as Romi Dev, wife of cricketer Kapil Dev. In the picture, we see Deepika and Ranveer Singh sharing a smile as the esteemed couple.

“To play a small part in a film that captures one of the most iconic moments in sporting history has been an absolute honour. ‘83 for me is an ode to every woman who puts her husband’s dream before her own…” Deepika tweeted.

Kapil Dev and Romi Bhatia were married in 1980. Speaking about the role, Deepika had described Romi as Kapil’s support system, adding that she played a pivotal part in her husband’s success. 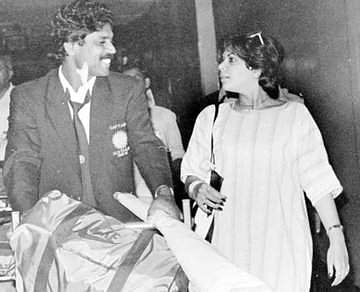 This is the fifth time Deepika and Ranveer are collaborating on-screen. The real-life couple had starred together in Ram Leela, Bajirao Mastani, and Padmaavat. Ranveer also had a cameo appearance in Finding Fanny.