Shooting for film, which was stalled for quite a while after its launch, has resumed on the same date that Kamal Haasan had debuted as a child actor in Kalathur Kannamma 60 years ago

We had recently reported that Rakul Preet and Priya Bhavani Shankar have been roped in to play important roles in director Shankar's vigilante action-thriller, Indian 2, starring Kamal Haasan as Senapathi, the 70-year-old ex-freedom-fighter-turned-vigilante bent on rooting out corruption.

Shooting for the film, which was stalled for quite a while after its launch, has resumed. And incidentally, it's on the same exact date that Kamal Haasan debuted as a child actor in Kalathur Kannamma 60 years ago.

Rakul Preet, who will be playing Siddharth’s romantic interest in the sequel, confirmed the news by posting a picture on Instagram. She has joined the sets of the film, reportedly in Rajamundhry, Andhra. 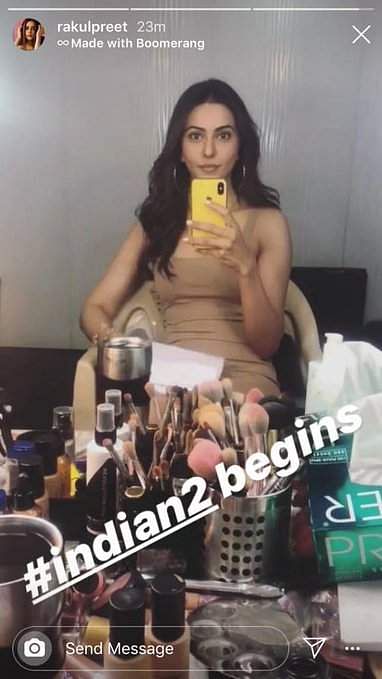 Meanwhile, speculations are rife that Siddharth will be playing the grandson of Senapathi in this sequel to Indian.

Kajal Aggarwal, who has undergone training in kalaripayattu for the film, and Priya Bhavani Shankar are expected to join the sets soon.

The makers have also reportedly signed Bollywood actor Vidyut Jammwal for the antagonist role, and Aishwarya Rajessh for a crucial supporting role in Indian 2

A trilingual in Telugu, Tamil, and Hindi, Indian 2 is expected to get a release next year.