The film's first look poster was released earlier today, featuring only Sivakarthikeyan, and now a second look, with what appears to be the entire cast, is out

Close on the heels of the announcement of the release date of Sivakarthikeyan-PS Mithran's Hero, the title of SK 16, the actor's Sun Pictures project with Pandiraj was announced earlier today. Titled Namma Veettu Pillai, the rural entertainer also stars Bharathiraja and Aishwarya Rajesh in important roles. The first look of the film, showing a veshti-clad Sivakarthikeyan striding with an indignant look on his face and a spear-like instrument in hand, was released in the morning.

Now, the film's second look poster, with what appears to be the entire cast, has been released. The poster looks like a group photo with the whole family, including Aishwarya Rajesh as Siva's sister, Anu Emmanuel as Siva's love interest, Bharathiraja as the patriarch, as well as Samuthirakani, Natarajan Subramaniam, and RK Suresh, among others, standing with a framed portrait of Sivakarthikeyan, who seems to walk out of the frame. 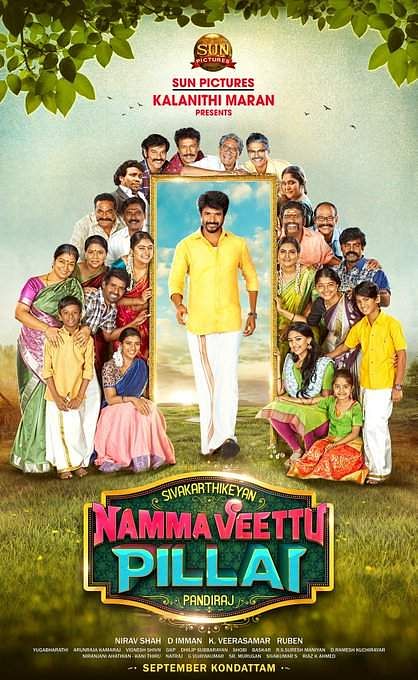 Incidentally, earlier reports suggested that the film, with music by D Imman, has been titled Enga Veettu Pillai, which was the name of the iconic 1965 MGR film.

Apart from Hero and Namma Veettu Pillai, which are set for release this year, Sivakarthikeyan also has films with Ravikumar and Vignesh Shivan in various stages of production.