The director who has returned to the short film space with Montage, talks about his new film

Lockdown ennui has resulted in many being starved for motivation to engage in productive work, but director Sarjun KM, known for short films like Lakshmi and Maa, and feature films like Echcharikkai and Airaa, has utilised the time to make another short. Shot during the lockdown with just a five-member crew, Sarjun's latest film is called Montage, and stars Maya S Krishnan, Aravinth Sundar and Vinithra Madhavan Menon. "I saw many people remembering to utilise their terrace during the lockdown. I noticed the neighbourhood and it got me picturing a pattern to the lives of those who live around us, and forming a story," says Sarjun. 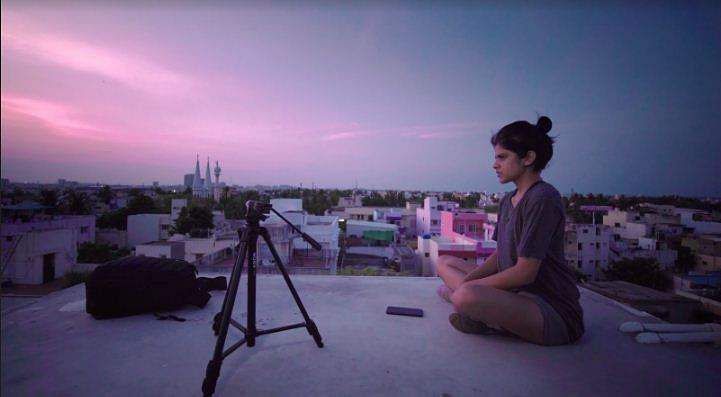 Was it challenging to write and shoot a script that is set in a lockdown?

The lockdown was relaxed in June and that's when we decided to shoot the film. By the time we scheduled and locked the dates, the intense lockdown was back again. A day before the lockdown started again, I had brought the crew to my place. All five of us stayed at my place for a few days and we got someone to deliver food every day. Maya's house is close to mine as well. So, we were able to complete the shoot in three days and then, made sure the crew was quarantined in my house for a week before they left. It was like an indie film shoot.

How was it to return to the short film space after directing feature films?

Typically, people begin wondering when a feature filmmaker does a short film, but they don’t understand that making a short film is harder. To communicate a strong thought in 15-20 minutes, despite all the technical and financial challenges, is a feat. Having said that, now that everyone has a DSLR, we have seen a spurt in mediocre short films and perhaps that’s why this space is thought to be inferior. However, I will always remember to work on short films in between feature films. I find it refreshing. I can produce these films myself and am answerable to noone.

The snooping idea at the centre of the story has become a subgenre over the years, especially in the West.

When the idea came up, the first film I thought of was Rear Window (1998). After discussions with with the film's cinematographer Sudarshan Srinivasan, we decided to conceive it as a drama, and not as a thriller. During shooting, Maya asked if I had seen the Oscar-winning short film, The Neighbors' Window (2019). I did not want to watch it because I was worried that its style would influence me. After postproduction, I watched the film. It's a big-budget project that tries to say something different, but the approach is the same. I decided then that if people said my film seems influenced, I would pay them no heed because what we are saying is quite different.

All your protagonists so far are flawed characters.

It is by design, for that's how we all are. There’s more relatability. How we have shown women too has been different all these years. Both genders are flawed and seldom fit into the stereotypes our films have encased them in. I don’t subscribe to this difference in depiction between men and women. So, I will continue to ensure that my characters stay real. This means they will be flawed.

Parallels can be drawn between the protagonist Vedha and the couple she spies on. Both deal with childbirth, but while she’s lonely, they find happiness in companionship.

Yes, Vedha opts for an abortion, and we can draw a parallel with the other couple goes through. I didn't dwell too much into the abortion angle because I've already done Maa about that. It’s only when Vedha observes their life that she gets answers about her own life. The principal character always needs a graph and should be a changed person at the end. There's even a comparison to be made between the scientist character and the other flirts. It is to show two very different types of men.

Though the couple that Vedha spies on, have no dialogues or even names, we see the religion they belong to.

It was not my original plan, but there's a mosque opposite my house and we hear their prayers five times a day. We thought to use that sound as a character and make those two a Muslim couple. We also decided to break conventional rules of portrayal and show them as a regular couple who are dealing with everyday happiness and sorrow.

You have spoken twice in this interview about problems with depiction. Do I sense an anger about how sex that is an integral part of this film, is depicted too?

(smiles) That anger is not just about Tamil cinema but on society as a whole. We still regard sex as a taboo act and not a natural process, like yawning or burping. We seem to categorise sex alone separately. I guess you will see my anger over this differentiation spill into other films I make too.

I am committed to a couple of OTT shows. I am doing an anthology for Aha along with Barath Neelakantan and Siva Ananth. I am also in talks to direct a Telugu feature film.