Mahesh Narayanan: CU Soon was the most challenging film for Fahadh Faasil

Though it was shot with a minimal crew, many who saw CU Soon (on Amazon Prime Video) wondered whether it was relatively more difficult to shoot than a conventional film. Its director, Mahesh Narayanan, certainly felt so. “Though the crew members were fewer, the execution was very difficult,” he says, adding that a lot of tweaking was needed to see if the correct emotions were being registered or not, and to give some clarity on what exactly was happening in each scene.

Mahesh initially wasn’t sure if the material would be apt for a short or a feature-length film. He told Fahadh as much. “With my other films, I could judge the length. One page is one minute, normally. This, however, was different.”

Mahesh also found the ‘screen life’ format tricky to pull off given its limitations. Some of the omitted details in between, such as the backstory preceding a video call, bothered him. He also expected people to make comparisons to Aneesh Chaganty’s Searching when the trailer came out. But now that CU Soon is out, many who have seen both films find the comparison unfair. “When you look at Searching, some additional tools were used for accessibility and convenience, but I’ve tried to avoid that as much as possible,” says Mahesh.

Though Mahesh had a good understanding of screen-based films, he couldn’t figure out how to go about it until he had some footage in his hands. There was no storyboarding here. “I told Fahadh that we would first film something of the other two characters (Roshan Mathew’s Jimmy and Darshana Rajendran’s Anumol), take a break to edit it, and then inform him. There was no guarantee of anything. It was almost like filming audition tapes of these actors.” 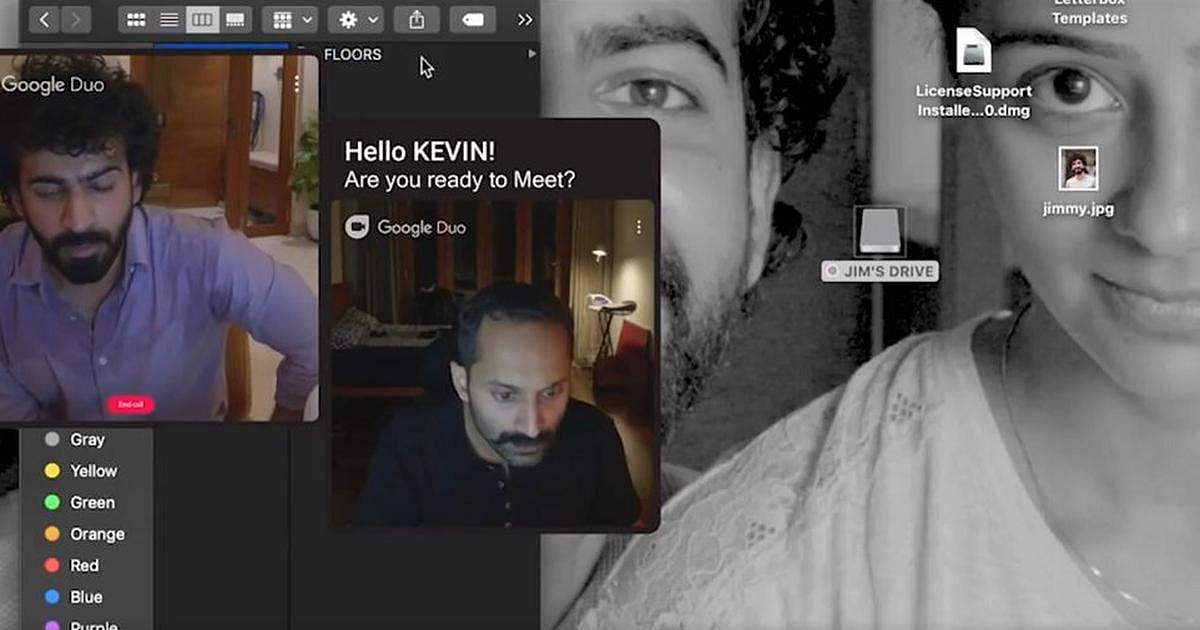 Since the actors and crew members were living under the same roof — multiple flats were rented out in Fahadh’s apartment complex — everyone could communicate with each other with ease. “It was the most challenging for Fahadh because I couldn’t shoot his reaction footage without shooting the others’ portions,” continues Mahesh. “After all, it was about trying to make a human story more than an investigative one.”

For the IT-related stuff, Mahesh sought the help of his wife, an IT expert herself; for the actors playing Arabs, Mahesh contacted a few guys who had been part of Take Off; for the locations, he used Kochi’s Grand Hyatt and Aster Medcity to stand in as the interiors of the offices and airport interiors in the Middle East.

As there was no room for cuts, the actors had to perform the entire scenes, such as the beginning to the end of a video call. They also found it challenging to work with only a single lens. Later, on the editing table, Mahesh got to tinker with the footage to give it a more cinematic language, like panning and tilting as seen in conventionally shot films. “The advantage of shooting in 4K is the option of digital zoom and creating individual shots,” he says. Sabin Uralikandy shot the live footage while Mahesh worked on the virtual cinematography.

Since music plays an integral part in the storytelling, I ask if Mahesh had ever envisioned the film without music. “No, I felt it was necessary because we are narrating a dramatic story. Music, to me, is a form of writing. There was a theme for the Jimmy-Kevin interaction, a theme for the Kevin-Anumol interaction, and so on,” he explains. While making the musical decisions with Gopi Sundar (composer), Mahesh used Johnson master’s music as one of the references, like the romantic tunes from Padmarajan’s Namukku Paarkaan Munthirithoppukal.

Mahesh was also concerned whether audiences, especially non-Malayalis, will be able to follow the ‘Manglish’ text messages on the screen and the corresponding subtitles (created by Vivek Ranjit) at the same time. Because of this, he didn’t want the film to be streamed in full screen. “Having black bars below the frame gives you an advantage as you can place the subtitles on it. This is one of the reasons why CU Soon is best suited for an OTT release as people have the option of rewinding and checking again what they may have missed on the initial glance. When I sent the footage to foley artists (sound creators), I included subtitles with the content as they were not Malayalis. While working on it, they found it too quick to follow and asked me if we could slow it down a little.”

One fascinating character detail was that of Kevin, an IT expert, sleeping with his wallet and electronic devices open. “I know people like that. As for the guy who comes to clean his house, there is already an arrangement with him. Kevin knows that he wouldn’t steal anything,” he laughs.

Some viewers also brought up doubts like the possibility of Google Duo working in Dubai. “Well, people use VPN (Virtual Private Network), even for making WhatsApp calls. It’s a reason why I set the film in 2019 because Zoom was not in vogue then.”

Mahesh reveals that a feature-length version of CU Soon will be made and released in theatres soon. He clarifies that it won’t be a remake or sequel. This would be a first, at least for Malayalam cinema. In that, Kevin may have a smaller presence. “That version will fill all the missing blanks. It will be simply an extension of this one,” he shares, adding that he is not interested in doing another screen-based film like CU Soon again. “Making this film was an exhausting process. I don’t think I can even remake it. I did this out of excitement and, in the process, made some mistakes and rectified them. But I can’t do the same thing twice.”

So, is there any other storytelling format that Mahesh would like to try sometime? “I would like to do something like Damien Chazelle’s The Stunt Double (the ‘vertical cinema’ which the Whiplash director shot on iPhone recently).  But whatever format it is, I have to study it thoroughly before doing it. We may see more ‘vertical’ films in the near future. Who knows?”