Filmmaker and cinematographer Rajiv Menon has been quite busy over the past few years. Since Sarvam Thaala Mayam (2018), Rajiv has set up a filmmaking institute, made innumerable ad films, and found a new haven in OTT platforms. He is now gearing up for the release of Putham Pudhu Kaalai, an Amazon Prime anthology film that he has directed a segment for, alongside Suhasini Maniratnam, Sudha Kongara, Karthik Subbaraj, and Gautham Vasudev Menon. “Most of the content out of Bombay on OTT has crossed boundary lines and they’re watched outside the Bollywood angle. We’re sitting here and watching a Spanish series like Narcos. Did we ever think that this was possible? I’ve been a great fan of the writing that’s been coming from the West to the OTT platforms,” says Rajiv, in his Time Pass conversation – a webinar arranged by The New Indian Express, and hosted by Sudhir Srinivasan, Entertainment Editor of The New Indian Express, and senior journalist Kaveree Bamzai. Rajiv adds that he believes that film culture and film appreciation are going through a major change. “I don’t think film knowledge is elitist anymore. It is not available only to someone who studied in Pune Film Institute or did some film appreciation course.” 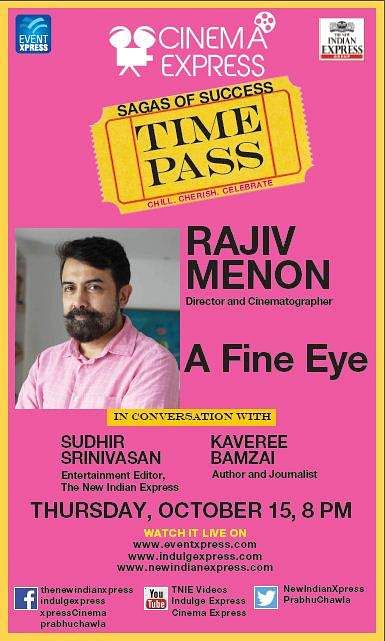 Rajiv is well-known for his knack of using music to drive the narrative. Speaking about the good old days when melodies ruled, he says, “We have moved on from the days when an entire film or the avastha of a character used to be condensed to a single lyric in a melody. It’s no more a necessity but rather a choice.” When Kaveree asks if Indian cinema has lost its USP of staging songs in a grand manner, Rajiv says that sometimes a development is stalled due to the business surrounding a product. "People don’t accept songs, but they accept background scores."

On how Putham Pudhu Kaalai came to be, he says, “They were looking for people who were willing to work during the lockdown. It was a hopeless situation. Television was only giving bad news after bad news. So many people dying. Then you wonder what will happen to the entertainment industry and a major star commits suicide. Immediately after that, there’s a cyclone and there’s the conflict with China." It was in the midst of such a distressing situation that the filmmaker got the opportunity to work on the anthology. "At that moment, when somebody comes and asks if you could give a story about hope – about how people are coping with the lockdown – it was a challenge that was interesting.” Rajiv managed to shoot his short with a minimal crew. He reveals that even as the shoot progressed, many characters were knocked off and disappeared.

Famous carnatic singer, Sikkil Gurucharan plays the lead in Rajiv’s short, and the director says that he was impressed with how Sikkil worked in Sarvam Thaala Mayam. And with people growing long beards during the lockdown, Sikkil’s look was a good fit for the role. “The role required a lot of prep and research, and he had a lot of trust in me.”

He wraps the conversation by speaking about how OTTs have made the stars go for content and good stories. “There is no way a Paatal Lok would have been made with these stars if not for OTT platforms. I’m glad this has happened.”