We enter director Virumandi's room to see him being swamped with phone calls. Among them is one from another filmmaker who expresses anxiety about the fate of his impending debut feature. Virumandi reassures him, ends the call, and tells us, "Ellam namba thambinga dhaan (They are all our brothers)" in Madurai Tamil dialect.

Virumandi is basking in the positive effects of having made a debut film that has been received well. “The response has been tremendous. If the film had released in theatres, I would have got calls only on Friday, but as it is an OTT release, I am getting calls every day.” Though many celebrities have called him, the call that has moved him the most is from someone not part of the cinema field. “My house owner called, and I got all emotional. When living in Chennai became an ordeal for me, this man gave our family a house and has been a guardian figure for us."

Much research seems to have gone into the making of this film.

I draw from real-life incidents. This film too was based on the experience I had. A friend and I watch films every Friday, and when on one Friday, he couldn’t make it, I learned that his uncle had died in another country and there was trouble bringing the body back. That incident disturbed me as when my father died, we too didn't have anyone to take care of the rituals.

I shared the story with my close friend, Shanmugam Muthusamy (Director of Adangathey), who was equally shocked. I went to Ramanathapuram and interviewed people there who had faced similar issues. All this research turned into a story. There's a scene where Ariyanachi (Aishwarya Rajesh) blocks the car of a minister… It’s a real-life incident. It’s a story that hurt me deeply and I wanted to share that pain with people.

Your representation of emotions in the film, like the relationship between Ranasingam (Vijay Sethupathi) and Ariyanachi, has been widely appreciated in reviews.

I spoke to around 10 women who faced the issue of attempting to recover their husband/son's body from a foreign nation. Each time I asked them about this topic, they would drop whatever they were doing and begin crying. Everyone has sadness in them and it’s an emotion that is of paramount importance to me as a filmmaker. When we lose someone, we always say they have passed away to somewhere, and I have tried to talk about that place.

Is the primary character Ariyanachi named after Vela Ramamoorthy's book? Vela, of course, plays Ariyanachi's father in the film.

When I spent two years researching for this film, I collected names from objects like marriage invitations. I have taken photos of inscriptions and even randomly asked a tea shop vendor his name. I noted down all the names and that's how I got names like Ariyanachi, Ranasingam, Udaiammai, Kayambu, Sengodi, Thirukannan... All of them are names unique to that region. I know Vela Ramamoorthy since I played his son in Madha Yaanai Koottam. When I narrated this story to him, he shared information about his book to me; by then, I had already completed a schedule.

How was Aishwarya Rajesh's Ariyanachi conceived?

We spent a lot of time on the characterisation to make it as relatable as possible. We needed her to sound just like us—how we speak differently with different people. The romance sequence has been welcomed well too, as it's intertwined with the main story. When Ranasingam is not around, Ariyanachi takes over the baton to protest. I wrote that because I think women are more rebellious than men. 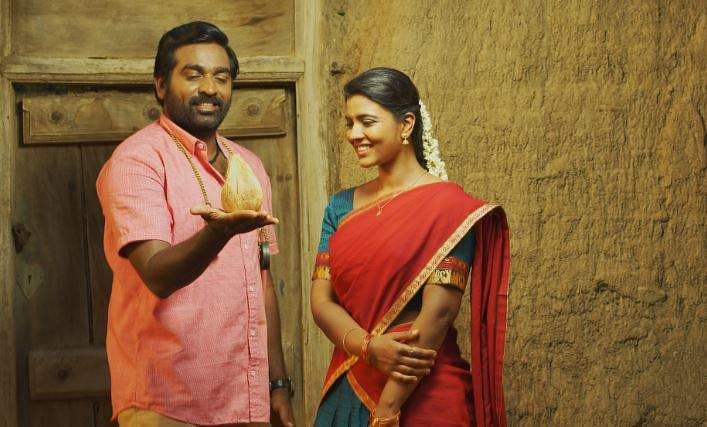 A criticism for this film is how despite Ariyanachi's struggle, the film is titled after the male lead, with even promos featuring him prominently. Is it true that Ranasingam's character duration was increased after Vijay Sethupathi stepped in?

Not really. The length of a character's screen space is determined by the story. Considering Ranasingam dies, we needed the character to make a mark in the mind of the audience. He is shown to be someone who can easily diffuse a difficult situation and go to the lengths of even meeting a collector. Even in the teaser, Ranasingam only appears halfway and Ariyanachi features in the rest. Ariyanachi's character is the main one in the film and the reason why it's strong is because of Ranasingam. It’s like how a strong villain makes the hero better.

What's the reason behind using water as a metaphor?

‘Neerindri amayathu ulagu’ is a common saying. We cannot live without water. In Ramanathapuram, water is supplied only once in 10 days and it's a struggle for people to get it. I am worried that this will become the norm in our state and the country soon. Youngsters from these places go to work in a country like Dubai that is even more arid. The irony intrigued me.

We understand that you have written the dialogues in Suriya’s upcoming film, Soorarai Pottru.

They called me because the story demanded that the Tamil be in Madurai dialect. Sudha Kongara ma'am was happy with the work I did and Suriya sir too congratulated me. For Aparna Balamurali to get the dialect right, I would read lines and send voice notes. I couldn't be a part of the shooting as I started work for Ka Pae, but I have seen Soorarai Pottru and I can assure you that it has come out really well.