Taapsee Pannu: I never wanted my films to change people

The actor talks about the decisions she made in her career, her lockdown experience, what made her reinvent herself as an actor, the status of her current projects and more

Thappad, Taapsee Pannu’s second film with director Anubhav Sinha, can be said to have ushered in a new form of cinema consumption during the lockdown. After a two-week run in the theatres, a second coming of sorts for the film occurred, following its OTT release. “It felt like a re-release. The word of mouth about the film had just begun to travel when theatres were shut down due to the pandemic. Everyone was curious to see what the hype was about,” said Taapsee in a chat arranged as part of Indulge Time Pass, a series of webinars organised by The New Indian Express group, and hosted by senuor journalist Kaveree Bamzai.


“I knew people would have polarised reactions. I never wanted to change people. I just wanted to start a discussion. That has been my aim from Pink to Thappad,” said Taapsee, who shared that her calmness during this lockdown has surprised those close to her. “I am generally restless and hyperactive. For the past two years, I have been running around making 3-4 films every year. And if things had gone as planned, I’d have had 5-6 this year. I wasn’t sure how I was going to manage it, when the lockdown was called. I have been catching up on 8-9 hours of sleep,” added the actor, who has an interesting lineup of films in various stages of production. Rattling off the list — Rashmi Rocket, Shabash Mittu, Haseen Dilruba, the Hindi adaptation of Run Lola Run, Anurag Kashyap’s sci-fi supernatural thriller, and a Tamil film co-starring Jayam Ravi — Taapsee revealed that her scheduling has gone for a toss, on account of the lockdown.

Also affected is the results of her rigorous physical training for Rashmi Rocket, where she plays a sprinter. She will have to start again, but for Taapsee who gave her career a much-needed fillip by choosing to act in a cameo in Baby, fresh beginnings aren't a problem. “I have done many films in the South. In Telugu, I was the conventional commercial glam heroine. I thought this was the path to become a big heroine. And then I realised it wasn’t working for me. That’s when I decided to change the direction. Though Baby was a small role, I wanted people to remember me differently. It not only got me the attention but gave me a sense of direction too."

Though there may not be a fixed formula for success, since Baby, Taapsee has managed to deliver consistent successes like Mulk, Pink and Badla. What is her criteria for choosing projects? “Would I watch that film in the theatres? Am I playing an unpredictable character? Is the film likeable in its entirety? These are some pointers. Also, most of the time, women characters are either black or white — righteous or a vamp. There are barely films in the mid zone. To see people writing real and believable women excited me. That’s what excited the audience too.” 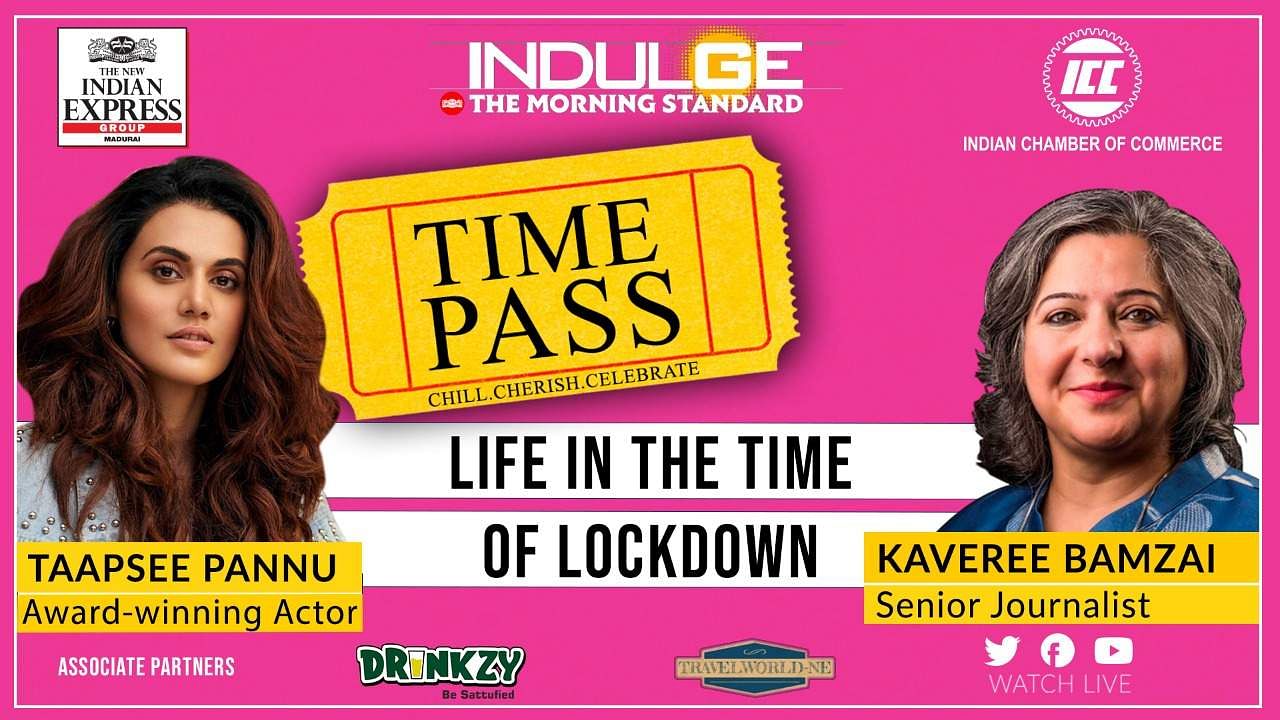 Her film choices have earned Taapsee a fan following that looks up to her. Dr Rajeev Singh, Director General, Indian Chamber of Commerce (ICC), who joined the conversation asked her about lockdown advice for people looking at a never-ending bout of uncertainty, due to this lockdown? “Let’s take every day as it comes. What’s happening is not under our control, so why stress about it? Make the most from the resources you have in hand. The idea is to live today. Don’t stress about what will happen days or weeks ahead.”

This episode of Time Pass was done in partnership with ICC.