Enable Javscript for better performance
Notes from a festival: The gift and curse of society- Cinema express
ADVERTISEMENT

Notes from a festival: The gift and curse of society

In this series of columns, the writer, the entertainment editor of the organisation, will be reflecting on the films being shown at the 51st International Film Festival of India in Goa

South Korean director Kim Ki-Duk, quite the favourite at film festivals, passed away last month due to covid-related complications. It was his film, One on One, that was screened under the ‘Retrospective’ section at the 51st International Film Festival of India on Wednesday. It was also one of at least two films from the day’s screenings to paint a rather bleak view of human society. One on One and the other film, a documentary called Acasa, My Home, both dwell on the dark circus that is society and its complexities, but go about it in dramatically different ways.

The premise of One on One is of a violent vigilante group extracting revenge on the murderers of a teenage girl—in essence, a premise that allows this director quite popular for the grisly violence in his films, to visualise many methods of torture. Rusty nails pierce heads, high-voltage electricity is channelled into tied-up killers… The leader of them all is even made to ingest noxious gas. Given the overall nihilistic perspectives of this film, one could process these methods of torture as a metaphor for the suffering every human is guaranteed to experience.

One on One is critical of hierarchies, of the growing rich-poor divide. One character quips, “Isn’t it curious that ramen noodles are staple food for the poor but snack for the rich?” However, these feel only like pithy quips, given that the gratuitous violence is inflicted on and by characters you don’t feel anything for. The film does pose another relevant question though— one that is relevant today, given how social media is often rife with calls for violent justice. It asks if criminals ever deserve violent reprisal. Can torture ever be justified? Overall, the film is an almost weary attempt to point out how humans cannot help but become lesser forms of themselves, as they try to get by in civilisation. 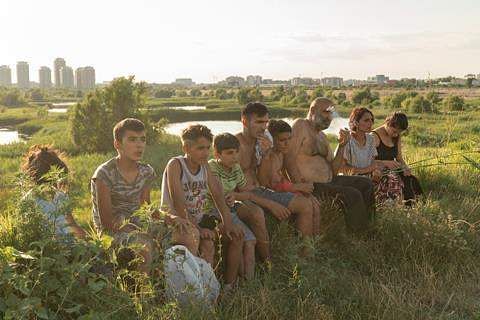 The other film, debutant director Radu Ciorniciuc’s Acasa, My Home, is a riveting documentary that bursts with drama, pathos, and why, even poetry. The film tracks developments in the life of a Bucharest family, the Enaches, as they are forcefully resettled from their unrestrained life in a natural park into ‘civilised’ living. In getting offered urban shelter and health and education benefits, what does this family lose out on? As an extension, what are we all losing out on when we shed natural ways of living for the many benefits of concrete society?

Perhaps the most wonderful aspect of Acasa, My Home is how it never takes a side. It simply shows you the life of the Enaches as they live in the park, with all its deficiencies too, and goes on to present the contrast of their life in the ghetto. Nowhere is this contrast more evident than in that glorious aerial shot, just before the title flashes, as you see where the Enaches live and slowly absorb the almost dystopian high-rise buildings on the other side of the highway. The sound of the wind as this scene plays out, adds to the grim mood. As the hour-and-a-half long documentary ends, you are left with several questions. Are we living life as we should? Are the advantages of urban living not preferable? What about the loss of individuality and freedom? Walking out of the theatre, grappling with such questions, it was clear to me that director Radu Ciorniciuc had succeeded in his objective of raising some existential questions with his sharp debut.