The Map of Tiny Perfect Things begins with young Mark (Kyle Allen) strutting around his hometown with a teenager’s pizzaz. He is always one step ahead of everyone around him. Mark’s superpower is that he is the only one who understands that the world is now caught in an infinite time loop, and his life is a temporal anomaly. Everyone else is living the same life every single day without the knowledge of such a catastrophe having befallen their lives. 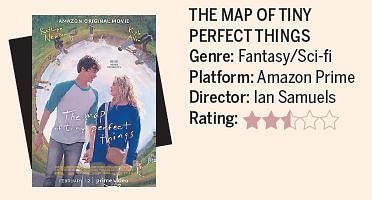 However, Mark isn’t the least perturbed about being stuck on the same day. He finds ways to do little things to amuse himself in a day whose mundaneness is exacerbated by repetition. There is a girl he has feelings for, but he is hopeless at flirting. There is a friend he meets for a video game session. Mark is convinced he is the hero of his story. But what if he were just another character in someone else’s story? That’s what happens when Margaret (Kathryn Newton) comes into his life. A fellow temporal anomaly, Margaret too knows she is stuck in the time loop.

It is smart how the filmmaker addresses comparisons with films like Groundhog Day or Time Bandits by frequently referencing these classics. This self-awareness is important in this film which prefers to be a cutesy rom-com more than a sci-fi film. Full points to Newton and Allen for ensuring that the romantic portions never feel clichéd. Two young adults, who find solace in each other, go on a sojourn to find the “perfect things” that happen on a day. These “perfect things” aren’t necessarily out of the ordinary. Despite the overwhelming sense of deja-vu, the innate charm and earnestness of the leads ensure that tedium never sets in.

The film is a reminder of the beauty in the randomness of the world. On one level, this visually pleasing tale is an oft-told love story between two teenagers. Viewed as a time-loop film though, you see a commentary on the vagaries of time, on how there are inherent variations even in the most banal of events. The best part of The Map of Tiny Perfect Things is that it is competent in reaching these objectives. It may not have the emotional heft of About Time or the deadpan humour of Groundhog Day, but director Ian Samuels is aware of the difference since he hasn’t tried to make one like them. The movie is content with reminding us that the world is full of miracles, and thus nudges the hint of a smile on our faces.